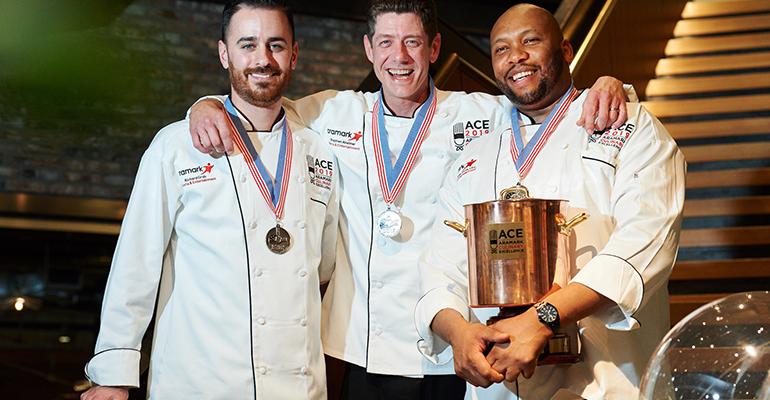 A team of three chefs from the Sports & Entertainment division of Aramark bested teams from five other Aramark divisions to win the Inaugural National Finals of the Aramark Culinary Excellence (ACE) Competition—a showcase of the company’s domestic culinary talent and menu innovation—and take home the Copper Pot trophy. The competition required each team to create a four-course meal utilizing a mystery basket of 16 fresh, seasonal and local ingredients.

In addition to competing for bragging rights and the Copper Pot, each culinary team competed on behalf of an Aramark nonprofit partner, so as a result of its victory, the Sports & Entertainment team earned a $10,000 donation from the Aramark Charitable Fund for its designated partner, Back on My Feet, which helps the homeless get back on their feet.

However, in the spirit of friendly competition, just for competing, all of the other teams earned a $5,000 donation for their nonprofit partners—Boys & Girls Clubs of America (Business Dining); Hope Center for College, Community and Justice (Education); Alex’s Lemonade Stand Foundation (Healthcare Hospitality); and National Park Foundation (Leisure).

The Aramark Culinary Excellence Competition is a year-long competition that culminates with a national finals where the top three winners from each business unit form the teams. The 2019 competition saw participation from more than a hundred chefs across all divisions.

Here’s a photo tour of the competition, the winning team and dishes forming the prize-winning four-course meal.