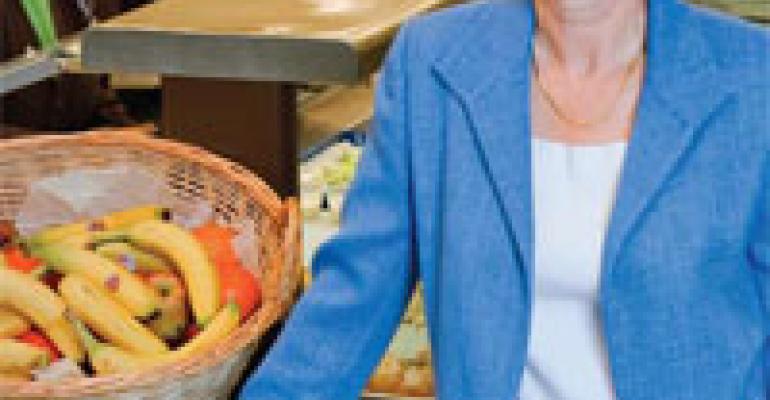 Before Hurricane Katrina devastatingly damaged New Orleans in August 2005, Pat Farris had already managed to rack up quite a list of impressive achievements for the foodservice department of that city's archdiocese of 100+ schools.

But her actions and accomplishments immediately following the storm, and since then, as the archdiocese has struggled to rebuild its schools and its employees' families have sought to rebuild their lives, have truly established her as a model of leadership. Farris' efforts are an example of the kind of broad-ranging effect a driven, committed school foodservice program can have on a community and have earned her a 2008 Silver Plate Award.

Her commitment to the school segment goes back to the 1980s, when, as area manager for the Louisiana Department of Education, she inspected and oversaw school foodservice facilities across the state. Farris had already spotted what she saw as her “dream job” — directing foodservices for the Archdiocese of New Orleans.

“In my position, I got to see a lot of different systems,” she recalls. “I reached the point where I no longer wanted to be the person telling foodservice departments what they needed to do; I wanted to actually implement those changes at a district myself.”

Of all the school systems she observed, Farris notes, “I loved the archdiocese of New Orleans the most, and decided to wait for a job to open up there.”

That happened in 1994, when the assistant director's position was posted and she was the successful candidate for it. Three years later Farris was named director. And over the next decade, before Hurricane Katrina struck, she set about making her mark.

First, there was her overhaul of business methods while she was still assistant director, taking the department from manual operations to complete computerization and centralizing menus in the mid-90s. That was followed by her implementation of a Severe Need Breakfast Program, changes that netted $85,000 in added annual revenue; the introduction of new menu items and a highly successful marketing initiative that increased sales by nearly 90 percent.

Farris worked to improve the lives of her employees as well, insisting upon boosting the wages of technicians and managers to put them at least on a par with, and in many cases, above, that of average local community wages.

It has been since Katrina, however, that Farris has really proven her mettle. Along with the help of dedicated staff, she's brightly burnished the reputation of the archdiocese schools, starting with an early response to the disaster which sought to gear up foodservice as soon as possible after the storm, even as she continued to live in temporary quarters herself and as her own house, irreparably damaged, had to be bulldozed.

Immediately post-Katrina, she found herself stuck in Baton Rouge, where she'd gone to seek shelter just before the hurricane hit. Her chief accountant was miraculously untouched and still in New Orleans; and her assistant director's home remained undamaged 40 miles to the south of the city. Taking advantage of that challenge, Farris' first order of business was to set up makeshift “command posts” in three separate regions.

“In the early days, the schools were all closed,” Farris says. “Our concern was to find our employees so we could pay them. We got the word out to everyone we could, telling them to go to one of these impromptu field offices to pick up their pay. We used that opportunity to assure them that, once they could come back, any employee who could reach any open cafeteria would be put to work.”

What had often been viewed as a difficulty in the past — working within the archdiocese's 11 parishes spread apart by as many as 70 miles to the north and south and 30 miles to the west, without any central kitchen facilities — became fortuitous. As some of those outlying schools sustained only minor damage and losses, these were able to reopen relatively quickly.

“Then we faced the challenge of getting food into a closed city,” she says. Working with the National Guard, sympathetic vendors and “the tremendously cooperative spirit” of her employees, Farris and the school managers made do with what food could make it through.

“As soon as we knew what we had coming in, we'd tell the managers, ‘Here's what you're going to get. Serve lunch with it.’ We no longer had individual school drops. The food would arrive at a single location, and the managers would go there, load their quota, and take it to their schools themselves. Not one of them complained,” she says.

In the final assessment, Farris was faced with 23 schools that had suffered water up to the ceiling. She's since overseen the complete rebuilding of the kitchens of seven of these within the two-and-a-half years since Katrina struck. (A significant number of schools remain closed, but will reopen as needed as families return to the affected areas). Farris has also helped the diocese attain a $2.5 million grant from Catholic Charities USA to fund equipment replacement.

Most recently, she has worked to overhaul all her business systems to be completely web-based. “After Katrina, we realized we needed the capacity to access everything remotely,” she explains. “This effort involved significant work and much training, but we're finally there now.”

Next up for Farris is the goal of revamping and improving her training programs. “I want to do more web-based training and to develop customized educational materials ourselves, developed in our own kitchens, featuring our own equipment and facilities. We want our employees to be able to readily teach customized courses at each school. That way, they won't have to translate from a generic how-to guide, but can immediately put the information and instructions into effect using their own equipment.”

As impressive as her department's roll-up-the-sleeves work ethic and quick-response capabilities have proven to be, the only thing that really matters to Farris' young customers is the food. And in this area, Farris and her team also demonstrate impressive expertise.

“We really cook here,” she says. “So many children today get fast food at home now, they want real food at school.” That translates into such mouth-watering specialties as a variety of gumbos (“as good as any restaurant in New Orleans”), real catfish filets, bone-in chicken, roasted turkey and fresh-made lasagna.

Farris offers a modest answer to the question of what she's most proud about in her career: “It's been the opportunity to give people a good job and pay a fair wage,” she says.