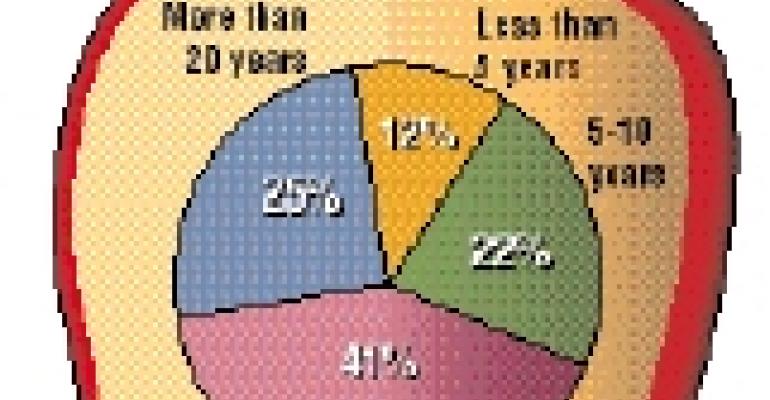 The age wave Who will replace today's retiring FSDs?

It's well known that school foodservice employees have a reputation for sticking around. In fact, it is these loyal, long-term school cafeteria workers, program managers and directors—many with 10, 20 and even 30 or more years of experience—who are credited with saving school nutrition programs from political assault in recent years.

As employees with their entire lifetimes devoted to a single industry, they have been easily mobilized to lobby against cuts in financial support and changes in the political structure of school meal programs. A dedicated, veteran staff can also boost operations in terms of enhanced productivity and efficiency.

But that longevity also has a downside, especially when operators have mostly senior employees and not enough up-and-coming mid-level talent, particularly on the management side.

"Within the past few years, our district has lost about half its foodservice managers to retirement, all of whom had worked in the district for more than 15 years. We expect to lose the other half in the next five years," says Heidy Camorongan, administrator of foodservice for the West Contra Costa Unified School District in Richmond, CA.

From Camorongan's point of view, it is disruptive to an organization to lose that many long-time employees at once. And she admits that finding suitable replacements will be difficult.

This turnover in the population of senior foodservice managers and directors isn't likely to dissipate any time soon. In fact, as the oldest members of the Baby Boom generation approach retirement, the U.S. Department of Labor predicts the situation will worsen as 76 million people exit the nation's labor pool beginning in 2011.

Mass exodus?
The bulge in the management ranks of school foodservice is rooted in the early 1970s, when increased federal spending made the field an attractive one for aspiring directors looking for opportunity. Now, many of the same people are finding themselves eligible to take advantage of attractive 25- and 30-year-and-out clauses written into their contracts.

The possible ramifications of this are so critical that they led the National Food Service Management Institute (NFSMI) to conduct a series of national studies to draw attention to the coming crisis and to encourage the industry to develop realistic solutions before it's too late.

Findings from a 1995 NFSMI survey are typical. They show that approximately 43% of school nutrition managers and FSDs nationwide have between 11 and 20 years of foodservice experience. An additional 30% have over 20 years of experience.

The implications are clear, according to Martha Conklin, director of NFSMI's applied research division. If one assumes the average working life of an individual is about 40 years, roughly one-third of school foodservice professionals have already fulfilled more than half their years of employment, she says.

A looming crisis
This demographic shift was first forecast in a major professional development study conducted by the Child Nutrition and Food Distribution Division of the California Department of Education back in 1992. It suggested that 46% of that state's school food-service directors planned to retire around the year 2000.

A parallel study addressing school foodser-vice leaders in the next millennium, which appeared in the 1997 School Food Service Research Review, reported similar statistics, this time on a national scope. Of the nation's 50 state child nutrition directors who were interviewed as part of the research, most did not see a shortage of qualified foodservice directors yet. But more than half expected to face a shortage by the year 2000.

That study also shows that an average of 31 new foodservice directors will be needed in each state as early as next year, with the greatest shortfall likely to occur in the Midwest and the Northeast.

While directors from the Southwest said they did not foresee an un-controllable crisis coming, the state of California did. Because of increasing enrollment figures, expanding school districts and a significant number of retirements, the state director at the time estimated that 500 directors would be needed to fill the gaps by the year 2000.

But if qualified successors aren't waiting anxiously in the wings, where will they come from? The answer to that question is complicated by the fact that the roles and responsibilities of school foodservice directors have changed significantly in recent years.

Where FSDs were once concerned primarily with managing food production and servery operations, they are increasingly taking on much broader budget, department and even multi-department responsibilities.

In addition to juggling production, purchasing and nutritional duties, most directors are now in charge of more sophisticated marketing, finances, procurement, technology and human resources.

As if that isn't enough, thanks to shrinking federal budgets and tighter government regulations, school FSDs are also becoming involved outside the cafeteria and in the community. There, they are finding themselves in the hot seat more frequently when it comes to child nutrition legislation and finding ways to generate additional revenue to compensate for dwindling federal dollars.

Districts throughout the nation believe these added pressures will keep many potential successors from pursuing management-level positions. Many fear that this will eventually lead to the drying up of traditional recruitment channels.

Successor shortages
Just as problematic are changing work habits. Foodservice directors representing all industry segments report that Generation X and Y employees seem to be more dissatisfied with their jobs and are willing to leave positions more quickly than those they are replacing.

Some even argue that the strong work ethic of the previous generation may be partly to blame when it comes to the shortage of qualified replacements. They say this generation has held onto jobs for so long they have blocked newer employees from the chance to gain the experience and skills needed to climb the management ladder.

Other directors report an even more ominous dilemma, saying that many of their best employees indicate they aren't interested in being promoted to management.

"Several of my staff have reached a comfort level that satisfies their career ambitions, and don't have a desire to take on additional responsibilities," one college foodservice director reports.

"It's not that they're unhappy with their jobs or even that they couldn't handle a promotion. They just like being able to balance work, family and community activities without having to sacrifice their personal time to the workplace."

In any case, it seems clear that many school districts will need to look down non-traditional pathways in an attempt to fill the projected number of vacancies. And it's just as clear they will need to do this amid intense competition from other industries— from healthcare to retail to contract service companies—that are looking for their own new managers from the same pool of candidates.

In fact, having so many long-term directors retire at once could well make self-ops more vulnerable to takeover by contract companies, since that can be considered by an administration as one option for solving the problem.

Many contract companies now actively recruit the top foodservice management students from colleges and universities long before they even graduate, points out Fred DeMicco, associate director of Hotel, Restaurant and Institutional Management at Penn State University. DeMicco also served on the ASFSA committee that conducted the 1997 study of school foodservice leaders in the next millennium, and speaks with authority in this area.

"If independents don't get more aggressive in their recruitment efforts, contractors are going to scoop up all the best leaders," DeMicco says, adding that unless independents recruit early, they may not like the pool of candidates that is left.

A cooperative agenda
Industry observers say better cooperation between operators, colleges and industry associations is one key to enlarging the pool of qualified candidates. And topping that cooperative agenda is a focus on the way onsite foodservice is portrayed and emphasized in hospitality and dietetic curricula nationwide (see story in Dec. 1998 issue of FM).

"It's no secret that the lion's share of graduates still go into hotel and restaurant jobs, but more students are beginning to pursue jobs on the institutional side because the demand is there, and because the salaries and benefits are growing more competitive," DeMicco says.

For professionals with dietary backgrounds, this growing demand couldn't come at a better time. Dietitians predisposed to healthcare careers are finding they need to look elsewhere for employement as a result of cutbacks in the acute care side of the industry.

For that reason, the American Dietetic Association (ADA) has gradually been altering its certification guidelines over the past decade in order to direct its members to positions in more non-traditional settings.

To be certified, dietary professionals are now required to take courses in management, food purchasing, equipment layout and design and employee relations in order to acquire the business skills they need to pursue careers in non-healthcare segments of the industry.

Because of the nutritional demands associated with school foodservice positions, this market seems to be one of the most promising targets for graduating dietitians.

"Dietitians have long had the knowledge of food practices and nutrition necessary to implement nutritional programs and work with students that have special needs. But today they are increasingly coming to the job market with a higher level of management skills," says Polly Fitz, former professor in the School of Allied Health at the University of Connecticut and a past ADA president.

Looking for leaders
Beyond implementing a more diverse curriculum and more intense recruitment strategies, many operators believe they will still be able to pull future managers and directors from existing labor pools. However, doing so will require that they implement more structured on-the-job training programs and a more selective hiring process.

Just as important is the need to pay closer attention to current job satisfaction levels and employee morale. Determining the factors that make employees look elsewhere for employment along with what incentives might convince them to stay is a common-sense step to retaining good employ-ees, says Gene White, a former ASFSA national president and California state director who now consults with schools and industry.

"If there is a higher level of staff retention, there is ultimately going to be less of a need for staff recruitment," White argues. "The longer employees stick around, the bigger that future management pool is going to become."

Likewise, White suggests that careful succession planning combined with medium-term retention plans could certainly address the issue for many districts.

The fact remains that the next wave of managers and directors may well have to climb the career ladder much faster than their predecessors. So directors and managers are placing a renewed emphasis on cultivating assistant managers for advancement. Many are also seeking better ways to identify employees with leadership ability and high career aspirations during initial recruitment interviews to help ensure that new hires are more inclined to move up through the ranks.

Likewise, more are beginning to practice "inclusive management" techniques that are designed to involve assistant managers in budget planning, policy review and strategic planning as part of their regular operational assignments. Doing this early on in the training stages enables directors to provide their successors with a better view of possible future job functions.

And given these demographics, the day when today's job candidates have to step up is likely to come sooner than many anticipated.

"The question really speaks to leadership. Some people are wonderful at managing expenses, production and so on, but they're not necessarily good leaders.

"What this industry needs to look for in light of the coming crisis are good leaders, no matter what kind of foodservice background they have," he adds.

"From that point on, it's our responsibility to train them to be good managers and directors."