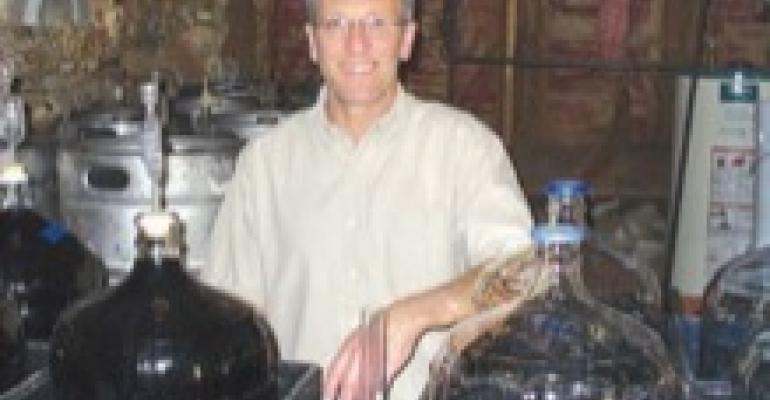 Paul Correnty literally wrote the book on traditional American cider making: his The Art of Cidermaking (currently out of print but available used on sites like Amazon) was published in 1994.

Correnty is also foodservice director for Harvard (MA) Public Schools and a veteran chef who has worked in both the commercial and onsite sectors. He had his own restaurant in Westford, MA, for 10 years before selling it and moving into corporate foodservice with Eurest Dining Services, first at Raytheon Corp. and then McGraw Hill, where he was the director. After that came a two-year stint with Chartwells Dining Services before he decided to leave and manage his own school foodservice.

He joined Harvard in 1997 and is currently responsible for dining services for about 1,350 primary and secondary schoolers in two buildings. He manages the cafeteria, vending and catering operations.

What's your menu like?
There are five meal choices each day at the high school. In the elementary school we have a fresh made-to-order sub shop and a full-size salad bar as well as some kid-friendly hot food and lots of fresh fruits and vegetables. Just about everything is cooked from scratch.

Do you do any local sourcing?
As much as I can. Is it economical? Absolutely not. Is the food we make economical? Absolutely not. Is it cheap in the long run? Absolutely! People say this is an affluent district—we only have about 1% free/reduced—but in a way it's like a poorer area in thatfor many of these kids, this is their primary meal of the day since mom and dad work in Boston and don't get home ‘til eight at night. So I don't restrict how much they eat. All the side dishes come with my meals and they can have as much of them as they want. It's self-serve with 8-oz. bowls and if a kid wants to take three containers of apple sauce or fruit salad, go ahead. What I don't like—and the kids all know this—is wasting food. I insist that they take only what they will eat.

So they can't just snack away...
Absolutely not. You can't just get a bagel or a basket of fries—in fact, we don't have a fryer—or just have chips and soda for lunch. There is none of that available at lunchtime, and, frankly, if you look at the quality of the meals we serve, why would you want anything else anyway? If they want a snack later on there are the vending machines.

How did you get interested in food?
I had watched Julia Child as a kid growing up in Miami. When I was 14, my father decided to move the family to Cannes in Southern France. I worked in restaurants there while getting my baccalaureate. How could you not get interested in food in a place like that? After I graduated, I had to move back to the U.S. because I didn't have a permit to work in France as an adult. I started college but soon dropped out to work in restaurants in California. Then my father asked me to manage the restaurant he wanted to open in Westford. I ended up doing that for 10 years.

What started the cider interest?
In France as a teenager, the place to hang out was the creperie, where they would serve sweet or savory crepes, and the traditional drink with that is hard cider, called cidre de bouche—"corked cider." When I moved to New England I got into home brewing of beers, but I also wanted to taste the ciders. However, when I looked around, I found that there were no commercially available ciders even though this is apple country. On the other hand, all the old Yankee farmers would have a barrel or two of the good stuff down in the cellar. I began to learn the techniques that they used and combined that with modern home beer brewing techniques.

How did you become so prominent?
The American Homebrewers Association happened to hold their annual conference in Manchester, NH, one year, so asked them if I could give a presentation on cider. This was the early 90s, when microbrewing was emerging. Anyway, I showed up with a friend and a five-gallon bucket of home-made cider, set up a table and poured glasses for people. That caught on and I wrote the style guidelines. Now, hard cider is a part of their national competition.

And those guidelines became your book?
The AHA has a publishing arm, Brewers Publications, that has a book on every beer style. So I wrote a book on ciders with history, stories and recipes.

And it's now out of print?
Yes, but I got a phone call recently from Globe Pequot Press in Connecticut, which wants to republish it. That's my summer job: I have to update it. It'll be out next year.

Any other cider doings?
There's the Cider Days event I helped organize that is now in its 12th year. I believe it is the largest hard cider festival in the country. It's held near here in early November. Full information is at www.ciderday.org for anyone interested in coming up.