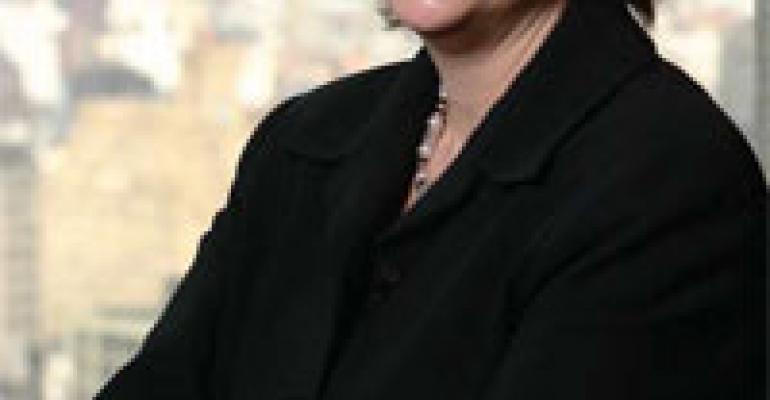 The name of the game in corporate dining these days is adding value for the host organization. That is what Amy Greenberg excels at in her role as head of executive dining conferencing and operations for Citi.

She cut her teeth in the B&I world with Wall Street investment firm Drexel Burnham Lambert during its 1980s heyday, then went on to manage dining operations for the various iterations of the Shearson/Lehman/American Express financial firm in New York for most of the last two decades.

In that time, she has led both painful cutbacks and dramatic expansions, overseen everything from employee cafeterias for thousands to executive dining rooms for a select few. Her performance in such a multitude of different environments, and in the pressure cooker that is onsite dining in the Big Apple's financial district, has earned her the 2008 IFMA Silver Plate Award in the Corporate Dining category.

Currently, Greenberg oversees eight executive conference locations for Citi (formerly Smith Barney, then Salomon Smith Barney, then Citigroup) — six in the New York metro area, one in San Francisco and one in Chicago — and manages a $19 million budget. Her staff of 143 (130 full-time) is responsible for anywhere from 200 to more than 1,500 meals a day, depending on the conference schedule. Each of the conference sites she manages includes a 300-seat auditorium. In addition to the dining-related operations, Greenberg also oversees multi media services supporting all operations, a department that processed nearly 10,500 work orders in the most recent fiscal year.

Her department's mission, as Greenberg sees it, is supporting Citi's business inititaives and operations by providing end-to-end meeting and dining services for employees and guests in a cost-effective way. “Expense management is always a challenge,” she notes. “We serve the leadership of the company but we want to do it in responsible way.”

Amy Greenberg came to a food-related career late. Though she grew up helping her parents cater corporate picnics at their day camp property, she majored in English in college and only decided on culinary school a few years after getting her BA.

After graduating from the CIA, she took a job with Saga Corp. to manage a corporate dining room for then-little-known Drexel Burnham Lambert.

“They were looking for somebody to really update the menus, bring some fresh ideas,” she recalls.

“It was 1980 and food was just starting to get sexy, and they felt that they needed to breathe some life into the program. It was a great opportunity and we were able to execute some really interesting changes. One dish I remember introducing was chilled chicken with peanut sauce.”

It was a fairly limited operation at first, one where 50 lunches was considered a heavy day, but Drexel was growing. In 1983 the company hired Greenberg away from Saga and put her in charge of its expanding in-house dining operations. These eventually encompassed three more satellite cafes, foodservice for traders on the trading floor and a new executive dining room on the top floor of Drexel's building. One of Greenberg's most vivid memories is a gala dinner there celebrating the reopening of the restored Statue of Liberty on July 4, 1986.

Unfortunately, Drexel's well-documented troubles later in the decade made life increasing difficult for everyone at the firm, and in 1989, Greenberg agreed to join the American Express unit Shearson Lehman Hutton.

“It was absolutely a stretch assignment for me,” she says. “I was hired to open this large building they were constructing in what's now Tribeca, as well as manage their executive dining in the World Financial Center.”

Also part of her charge was reducing a substantial subsidy as the firm tried to deal with new realities after the 1987 stock market crash. Greenberg did what was necessary to consolidate and prune Shearson's dining operations, chopping several hundred thousand dollars off the subsidy.

She chose to stay with Lehman when the unit was spun off in 1994, overseeing executive dining and a new cafeteria in Jersey City, but in 1996 she proved you “can go home again” by returning to the Tribeca building where she began her years with Shearson. This time her employer was Smith Barney, which had acquired Shearson's retail brokerage and asset management operations the year before Lehman was jettisoned.

“It had changed a lot in the couple years I was gone,” she says.

There was a new mangement team, new executive dining room as well as a conference center operation — her first exposure to this side of the business — and several remote locations. That was already more than she was managing for Lehman, but her responsibilities kept expanding as the company evolved, merging with Salomon Brothers in 1997 and then Citibank in 1998.

The moves inevitably led to redundancies as each merged company had maintained its own in-house dining and catering services. But that began to change in 2004 when a new unit called Executive Services merged all the disparate elements. As part of its structure, contract dining — cafeteria and employee retail operations — were separated from the executive dining and conference services functions, with Greenberg put in charge of the latter.

She took to her assignment with energy, forging cohesive, efficient in-house service providers from the elements left to her charge. On the conferencing side, from a system where different centers were reporting to different organizations and were managed by different contractors, she has brought uniformity of services, “so you get the same basic program and services in Greenwich as in Midtown.”

Despite the need to manage costs, Greenberg leaves her operations enough room to explore premium services, such as organics and locally grown product. Her chefs are given the freedom to find local providers and negotiate supply deals, a move that gratifies both the chefs and their customers.

She is also active in the industry, especially in the Society for Foodservice Management (SFM), where she has been a board member and president (1994-95). Her signature achievement undoubtedly was her instrumental role in founding the SFM Women's Council in 2004, bringing educational opportunities for leadership development to the women of SFM.

“Today we have seven women on the SFM board and a second woman president in a row,” she says proudly. “It's been a smashing success and I think it gave everybody a little kick.”