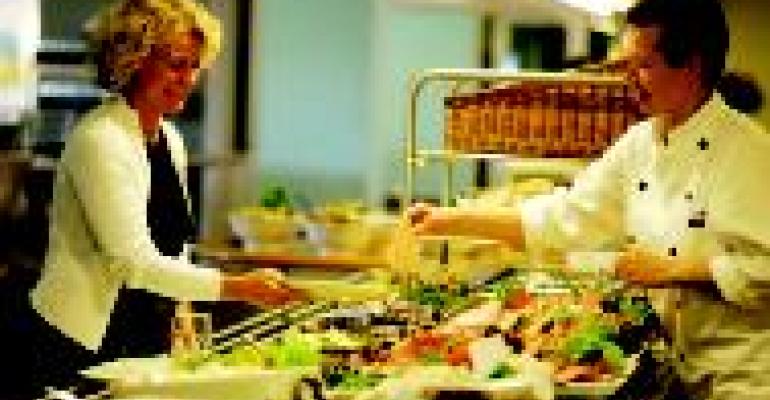 Beyond the Big Three...

While Compass, Sodexho and Aramark remain the world's largest foodservice contract management companies, they are hardly alone in international operations. A number of other companies operate multinationally, offering foodservice and other outsource services around the world. Here are some of the major ones:

CA One Services Australia provides food, beverage and retail services at several national airports and major railway stations in New South Wales and Victoria, while the AVS Catering unit provides concessions and fine dining at sports and entertainment venues like Melbourne and Olympic Parks, home of the Australian Open tennis tournament, and the Sydney Entertainment Centre.

Elior SA. With more than $3 billion (U.S.) in annual revenues, Paris-based Elior is one of Europe's largest contract catering firms, operating over 11,000 locations in more than a dozen countries, though France is its primary market, with nearly 60% of sales. Elior operates two divisions: Contract Catering, which manages onsite foodservice in noncommercial segments like B&I, healthcare, education and government facilities, and Concessions Catering, which operates retail-style foodservice along highways and in airports, museums, exhibition centers and rail stations.

Autogrill SpA. Autogrill, based in Milan, Italy, is an operator of more than 900 retail-style foodservice outlets in train stations, airports, malls and highway stops, for which it manages both its own restaurant brands and licenses popular outside concepts like Haagen Dazs, Burger King and Pizza Hut. In North America, the company operates through its HMSHost subsidiary. Autogrill is majority owned by the Benetton family, of fashion clothing fame. Total annual revenues exceed $4.5 billion.

ISS Group. ISS (Integrated Service Solutions) began over a hundred years ago as a Danish security firm but has diversified into numerous outsource services since, including foodservice as well as cleaning, maintenance, facility management and office support. Today it is one of the largest outsource services providers in the world, with over 100,000 business customers, some $7 billion in annual revenues and operations in 43 countries (formerly a public company, it was taken private earlier this year by a group of investors). ISS has grown aggressively since 1998, reportedly making some 350 acquisitions in that time. Foodservice, however, remains a fairly small part of its business mix.

Dussmann Group. A major German-based outsource services firm, Dussmann operates four divisions: Dussmann-Service, which is its primary contract catering arm; Kursana, an operator of senior living centers; Pedus, primarily a facility management outfit, and Dussman das KulturKaufhaus, a retailer of music, videos and magazines. Dussmann operates in 28 countries and has annual revenues of around $1.4 billion, with the Dussmann-Service unit accounting for about $1.2 billion of that total.