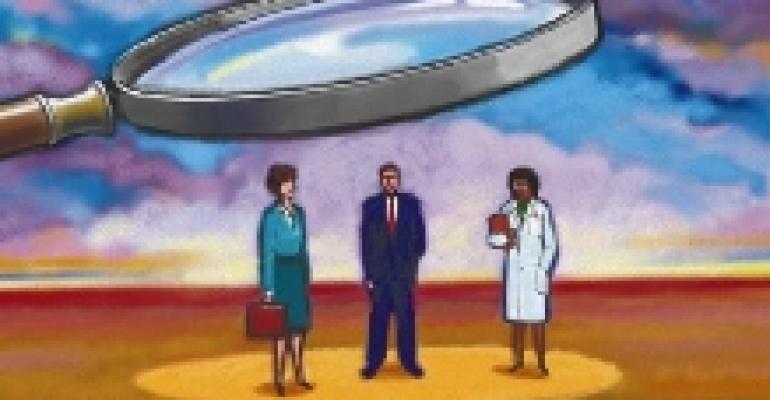 Finding the right person for the right job has become, for many in noncommercial, an exercise in frustration. In today's competitive environment, every operator in the noncommercial industry (and commercial too for that matter) is looking for a manager or chef with the right sort of handson experience to give their organization a leg up on its competitors.

The frustration doesn't end there, though. With the labor pool continuing to shrink, it's also increasingly difficult to hang on to those high-quality managers in your organization. You may be vulnerable to the recruitment juggernaut of a nearby school district that covets your foodservice manager or to that contract management company whose ambitious expansion plans call for an ambitious hiring effort that stops just short of a raid on your company.

While it's not easy finding and retaining entry-level people, recruiting and retaining experienced, well-educated and informed management level talent is even more challenging. Make a bad choice and it will cost you; some experts estimate a poor hiring decision typically costs between $4,000-5000.

But fear not. There are some tricks of the trade that can make the task of recruiting and retaining talented managers easy and effective.

Where to begin your search
There are many tools you can use when you have a management slot to fill. National and local newspaper ads are one source, but their effectiveness depends on many variables.

To be most effective, newspaper ads should list specific job qualifications, expectations, responsibilities, work culture and environment and advantages to working in your operation. Play up positives, such as opportunities for growth, for influencing change, for creativity, but watch your choice of descriptors.

"Don't use the word, 'institutional' or anything similar," warns Peter Cayan, director of food and nutrition at the University of Rochester's (NY) Strong Memorial Hospital. "Potential candidates may stop reading right then." He suggests using words like "restaurant" instead of "cafeteria" and descriptive phrases like "we are a team-oriented operation where creativity is encouraged."

If newspaper ads don't work for you, consider running ads in the business press (i.e. Food Management) or national press (i.e. USA Today,Business Week or in-flight magazines). At least two national foodservice management companies have tested the waters in these areas. (Since instituting an extensive recruitment program 11 months ago,which included ad placement in national magazines and direct links on the Internet with ADA and ACF, Marriott Management Services has built up a direct access database of more than 45,000 resumes, according to Paul Rowson, project manager, human resources field services, at MMS.)

Other options: work through professional associations. Most offer job bulletin boards or posting services for its members (some on the Internet).

You can also network with national and local culinary schools and associations, and colleges and universities with hospitality programs. Executive recruiting firms that specialize in the hospitality industry are another option.

Or you can take the more direct approach, like Tom Cooley, director of nutritional services, St. Luke's Hospital, Bethlehem, PA, did.

When Cooley was looking to hire his current chief clinical dietitian, he sent 25 personal letters to members of the local dietetics association (of which he is a member) who were currently working in similar positions, outlining the position available at his hospital and inviting those interested to call him. At least four qualified people applied.

"To me, direct mail is the best approach. It's more targeted, so you don't waste time interviewing people who aren't qualified," he says.

Some operators say you shouldn't hesitate to hire away personnel from other institutions. Gene Reed, director of foodservices at Ohio University (Athens, OH), recently hired an associate director away from another nearby university. "Do I feel bad about hiring him away from a colleague? No, because I have to do what's best for my organization."

"In the restaurant business, if a portion size is too big and therefore not cost effective, the manager or chef can make adjustments to better balance the cost," explains Donna Wittrock, director of food and nutrition services for Denver Public Schools. "Managers aren't able to easily make those kinds of adjustments in our facility because we must follow federal guidelines. The transition from commercial to noncommercial can be difficult as a result."

True, but some food-service directors specifically seek out managers with commercial experience. Strong Memorial Hospital's Cayan reports that when his staff hired the latest round of production managers, he specifically sought out and hired those with restaurant experience.

"Customer satisfaction is our number one goal. We want staff members who can bring in new ideas for attractively preparing and presenting sensibly seasoned food," he says.

But Cayan hasn't always been of this mindset. "Many foodservice directors close their eyes when it comes to recruiting from the commercial segment. I was guilty of that as well," he explains. "I thought the managers and workers we hired had to have only healthcare experience in order to understand the dietary restrictions we deal with. But I've found that culinary schools are doing a great job of including nutrition education in their curriculum so even if a chef or manager comes from the commercial segment, he or she has at least had some exposure to the requirements of our industry."

But even if you want to hire a manager or chef away from the commercial industry, how easy is it? You may have difficulty showing a chef in a commercial operation why he or she should come work for you unless he or she is looking for more of a nine-to-five-type job.

One of the biggest reasons is that commercial managers and chefs (or talented cooks) generally know very little about the day to day operations of the noncommercial market.

But if you can, through a newspaper ad, or through a one-on-one interview, show potential candidates from the commercial segment all the great advantages (regular work hours usually with no evenings or weekends, stable environment, room for growth, full medical benefits, etc.) to working in a noncommercial setting and convince them that the glamour often associated with the restaurant business doesn't necessarily pay the bills, more often than not you can convince them to join your organization.

"When you interview a commercial chef, you have to add the glamour back into the job description and responsibilities," says Bob Lewandoski, director of food and nutrition services at Englewood Hospital and Medical Center, Englewood, NJ. "Point out the opportunities for him or her to be creative and to be in front of the public through cooking demos, areas that play up to their egos."

What to look for and to look out for
Operators say that they are looking for a career-oriented, team player, someone with supervisory skills; the ability to roll with the punches, either landed or pulled; a sense of compassion and humanity; the patience and ability to train and counsel; and the flexibility to direct and be directed.

Alice Elliot, president of Tarrytown (NY)-based Elliot Associates, Inc., an executive search firm that specializes in the hospitality industry explains, "Searching for the ideal job candidate isn't about technical skills; it's about who fits the culture and who will embrace the opera-tion's philosophy."

So beyond reading resumes, how can you determine if a potential candidate has what it takes to make it in your operation? One of the best ways is to ask in-depth "what if" questions to get a better idea of how the person has handled him or herself in prior situations that may be similar to those he or she would encounter on the job in your kitchen.

"I create a scenario for interviewees and ask each one how he or she would react," says Lewandoski.

"For example, it's the person's first day on the job, I'm in a meeting, the evening supervisor called in sick and he or she has to close up the kitchen. I would like the person to tell me that he or she would round up the food-service staff, explain the situation and ask for their help since they are familiar with the procedures. What I don't want is someone to say that he or she would quickly read the operations manual and try to figure it out. That person isn't a team player."

"The right candidate has to have a great personality," Wittrock adds. "Kids look up to their lunch room staff, so I'm looking for people who can set good examples and who like working with children, teachers and parents."

Watch out, though, for interviewees who sound too good to be true.

"I have personal experience of hiring people who talked a good game in the interview, but once they started working, they didn't have the necessary skills," says Daphne Gulick, director of foodservices at Masonic Homes, Elizabethtown, PA, She advises operators to "be prepared when you interview. Don't settle for less than you're looking for."

Who should do the interviewing
Smart operators don't rely strictly on their own opinions when it comes to hiring decisions. Most foodservice directors ask final management-level job candidates to interview with at least one other department manager in addition to themselves. Some operators take the interviewing process further.

Carol Hackerott, assistant director of residential life at Oklahoma State University in Stillwater, OK, inter-viewed with more than 40 individuals when she was hired three months ago. "I think it's critical that every team members' voice be heard when it comes to hiring managers. It shows your employees that you're committed to making the right hiring decision for everyone," she says.

Besides interviewing with the director and the other assistant director of residential life, Hackerott was also interviewed by every dining unit manager, several production workers, even a group of student leaders on campus. "They mostly wanted to know my views on student services and what I would bring to the University," she recalls.

Besides others in your department, there are other influential people who might also be included in the hiring process.

When Steve Renz, vice president of operations for Creative Dining Services, Inc., a Holland, MI-based foodservice management company, needed to hire a chef for a client, he recommended a reputable local chef. The client, however, wanted to fly in a chef from the Waldorf-Astoria hotel to interview qualified candidates. The client eventually chose the chef Renz originally suggested.

"The client felt good about being directly involved in the selection process and the chef I felt was best suited for this position got the job, so it was a win-win situation for everyone," Renz affirms.

Keeping quality people on staff
When we asked operators for tips on how to keep good employees on board, they talked about building loyalty; of empowerment; of creating and emphasizing growth opportunities for individuals; and of making managers feel needed, like part of a team that wouldn't operate as well without them.

Opportunities for continuing training is also important. Renz brings his company's chefs to a culinary school in Grand Rapids, MI every year for a two-day training program where they can learn new skills and swap ideas.

Publicly recognizing a manager's contribution to the operation is another employee retention tool.

"I give my employees recognition in reports I send to our hospital's administrators," says Lewandoski. He shares copies of the reports with his employees. "In previous jobs, it always bothered me that the administrators didn't know who I was even though I contributed to the foodser-vice department's success. I don't want my employees to feel that way."

The bottom line: the best way to attract the caliber of staff you want in your operation and to keep them is to make your organization a good place to work.