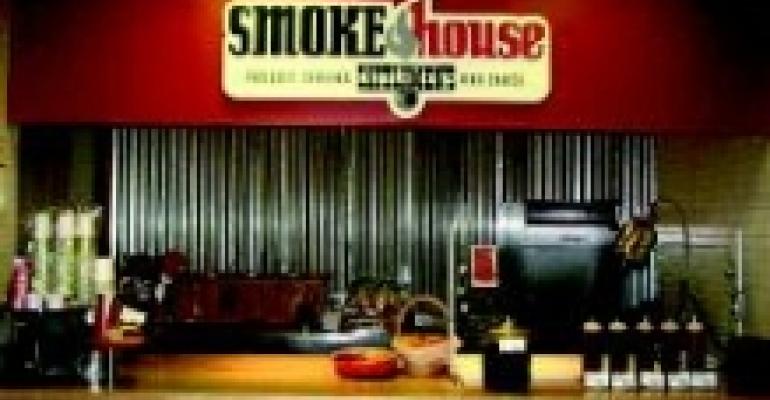 "Recognizing the many positive nutritional components, as well as the trend toward pomegranates, Gary developed a pomegranate barbecue sauce to drizzle over a grilled tender of beef," says Spicer

"The sauce can be used in a number of ways on just about any protein. The great thing about barbecue its ability to be both subtle yet flavorful.

"First you reduce the pomegranate juice so that it's the consistency of maple syrup, then you add lemon juice, honey, chipotle and cilantro. The end result is not only delicious, but very colorful."

"Texas boasts one of the most famous American regional barbecue-styles. When we introduced barbecue as a theme meal, the response was incredible. So incredible, that we developed and implemented the station concept The Smokehouse Barbecue.

"We pay close attention to the core proteins we offer so that variety and regularity share equal parts. Since we opened the station, we've smoked everything from brisket to quail to salmon. Salmon has been the favorite thus far. As a vegetarian option, we smoke portobello mushrooms, baked potatoes and even tofu. We alternate between a steak night and a prime rib and shrimp combination night that have been really popular with students.

"The idea is to keep it simple. We smoke with hickory and a homemade rub (see recipe below) at 240° for 15 hours. The slow cooking allows the proteins to develop the intense flavor profiles without much fuss on our part. We purchased a Cookshack smoker that makes it easy for the staff to use with little guesswork.

"Like many others in the school segment, we will often put together hot dog barbecue in the elementary schools. It is a pretty common occurrence for our little guys, and a way to get parents to come to school for lunch with their children."