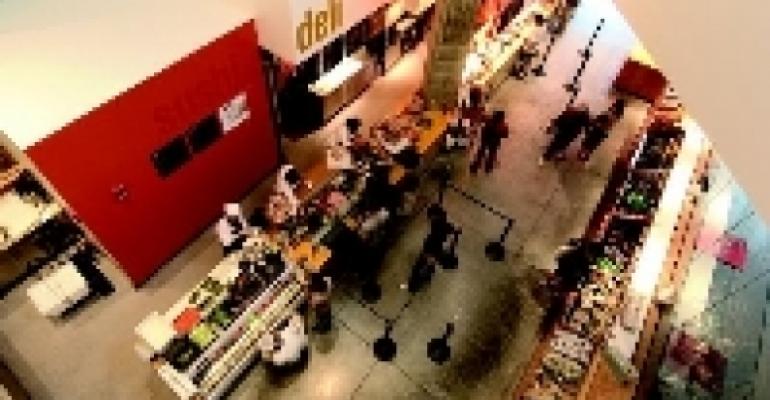 With 10 outsource providers on campus, MIT is harnessing market forces to foster excellence across its dining and catering operations.

Adam Smith wrote famously of the 'invisible hand' that guides markets, with consumers always seeking higher value in their purchases and entrepreneurs finding new ways to satisfy them in order to produce higher profits.

Similar thinking has led Cambridge-based Massachusetts Institute of Technology to adopt an unusual, free-market model for its campus dining operations over the past three years.

In doing so, the school's foodservice program has moved from a sole-source management contract to one that today is managed via contracts with not only all three of the largest foodservice management companies, but also with an eclectic mix of other, entrepreneurial providers from the region.

"Culturally, MIT sees itself as a 'competitive meritocracy' that embraces competition and achievement and makes them a core part of the educational experience," says Director of Campus Dining Richard D. Berlin, III, who joined the department six years ago.

"While it did not change overnight, the administration had a great deal of interest in taking a multi-contractor approach that would achieve this by encouraging more competition on the campus," Berlin adds. "We also planned to significantly expand the number of foodservice outlets in both our retail and residential areas and also via partnerships with local entrepreneurs."

Today, six years later, the MIT dining environment has become a microcosm of the free market in which all operations openly compete for the food dollars of students, faculty and guests.

As department head, Berlin's role is that of both arbiter and partner. On the one hand, he negotiates contracts and settles "territorial" issues such as menu and timeof-service overlaps; on the other, he works closely with his business partners to enhance their services and business prospects.

A 20,000-foot View
A Culinary Institute of America graduate who also has a business finance degree, Berlin brings both the culinary and business management perspectives needed to make such a program work. He earned his management stripes working for nine years in the campus dining and campus life departments of Cornell University under former director Peg Lacey, then served as assistant director at Duke University in the mid 1990s.

From his office in the student center, Berlin offers the "20,000-foot view" of foodservice at MIT and the thinking behind it.

"Our model assumes that, for any meal occasion, a customer has a choice: to eat in one of our facilities; to prepare his or her own meal; or to eat at a commercial restaurant. We want them to have this choice and our dining programs generally do not look to influence it, other than by keeping the options diverse and seeking to encourage meal value."

On the other hand, the university's campus life programs do have objectives that involve foodservice. In the mid-1990s, MIT commissioned two major studies that looked at ways student life could be improved. "A core finding was that dining as a communitybuilding mechanism was not reaching its potential here," Berlin says.

One reason: the school had not required student participation in meal plans for many years. It had also built most of its residential facilities with individual kitchens, where students could cook for themselves. Finally, most residence halls were small, housing only 200-300 students, making the economics of individual dining operations difficult. (For example, Next House was serving as few as 85 meals a night in the late-1990s).

The Best and the Brightest
"We have some of the best and brightest students in the world," says Larry Benedict, Dean of Student Life. "One of our goals is to help them add balance to their lives. We see dining as a cultural denominator and are committed to giving them dining opportunities that provide a sense of belonging and encourage more neighborhood communities."

On the other hand, Benedict recalls that when his department floated the idea of instituting a more traditional residential meal program a few years ago, "that went over like a lead balloon."

"Parents and students want more meal options today. We came to believe that competition is the American way, and that we should encourage more of it in our dining programs."

The upshot was that for a variety of reasons, MIT wanted to encourage a more entrepreneurial approach to foodservice and was prepared to restructure its dining programs in a major way to do so. That was the situation when it created a campus dining department in 1999 and hired Berlin to run it.

Breaking Up the Contract
With two years left under the existing foodservice contract at the time, Berlin says his first objective was to work with the existing contractor to take a fresh look at the strengths and weaknesses of all campus foodservice operations. At the same time, his department began to prepare an RFP that would restructure the way those operations would be bid.

"We really liked what Aramark was doing with our faculty club and with the MIT Catering operations. We wanted to extend their contract in those areas but decided to unbundle the residential and retail operations into separate lines of business," Berlin says.

"These had completely different business dynamics and, by structuring the bid in this way, we knew we'd be in a better position to evaluate competing proposals.

"We wanted retail to run as a competitive P&L model. We also knew we would have to subsidize the residential program because of the difficult economics its operations presented. And in the larger scheme of things here, we wanted to encourage as much creativity as we could to develop residential dining opportunities that would enhance our ability to build on campus community."

In 2002, all three of the largest U.S. management companies participated in the RFP and the submitted proposals were evaluated by a broad-based MIT committee that included faculty, staff and students. After field trips in which committee members visited showcase accounts managed by the bidders at other schools, contracts were awarded.

Beginning in mid 2002, Sodexho assumed responsibility for the lion's share of retail operations (including those in the new Stata Center); Aramark retained management of MIT Catering and the school's Faculty Club; and Bon Appetit took over the school's residential dining program. The school also has contracts with four vending companies.

"We also wanted to bring in some local operators," says Berlin. "We saw this as a way to provide more diversity from both a cultural point of view and in terms of choices available to the students."

For example, five different independent operators run restaurants and the large convenience store in the school's main Student Center. Another runs a c-store in MacGregor Hall and a seventh runs a late night cafè on the first floor of Simmons Hall. Retail contracts are written as P&Ls with MIT sharing in the financial success of each operation. MIT's debit card program—TechCASH—can be used at any foodservice location on campus as well as some operations off campus.

Competition among the providers is probably most pronounced in the catering arena.

Traditionally, on-campus catering services were awarded to one provider under contract. In the present approach, catering exclusivity is guaranteed only for selected venues; all MIT's foodservice providers compete for catering business elsewhere on the campus.

Thus, Aramark exclusively operates the MIT Faculty Club, but its MIT Catering services competes with Sodexho, Bon Appetit and even the independent operators from Lobdell Court for business in other venues. Campus event managers can use any provider they wish, including commercial operators from off-campus.

Berlin wants to see MIT Catering and other on-campus providers take a bigger share of the business that does go to the outside. "When an outside vendor gets the catering business, none of that money stays on campus," he says. "Our on-campus providers are exclusively dedicated to MIT, and we want to leverage that commitment."

What's the secret to effectively managing all this diversity? "Picking good people and working hard to develop strong partnerships,"says Berlin. "In terms of the independent operators, we looked first for people with a strong track record in foodservice, whether or not they were experts in the college market.

"It's also key to have a strong operations manager, like Ward, to oversee compliance with contracts and ensure that sanitation, menu quality and presentation are regularly up to our expected standards. These are the same things you would do in a self-operated environment."

Ultimately, Berlin says, "our dining programs are based on what our customers say and think.

"On the management side, we do a lot of customer research to know as much about their perceptions as possible. In the end, the customers vote is what matters, and they vote with their wallets."