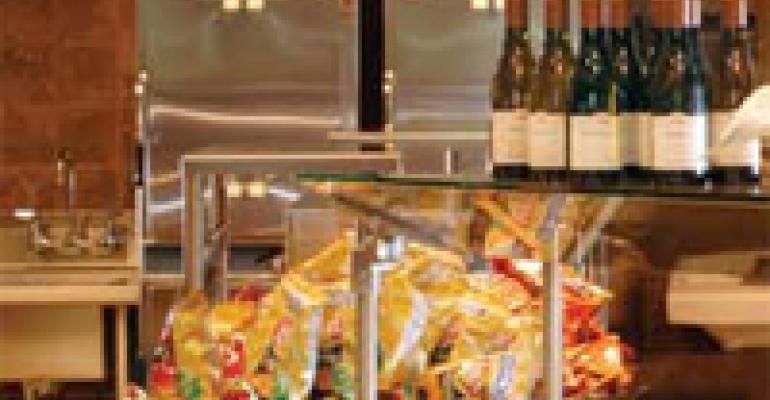 Eyes on the Price

How commercial can you be when you’re supposed to be noncommercial? That is the dilemma facing directors who must formulate retail foodservice pricing strategies in onsite environments.

In an era when onsite dining is often expected to “contribute” to the financial bottom line of the host organization, or at least pull its own financial weight, effective retail pricing is a critical component of operators’ fiscal health. In sites where retail operations complement revenue streams from board plans and patient dining, an effectively priced retail end is often the difference maker between a middling bottom line and a sparkling one. And where retail is the exclusive type of foodservice offered—as is increasingly the case in B&I and even some institutions—effective pricing is absolutely critical.

Fortunately, the traditional view that onsite dining is “noncommercial” seems to be eroding as consumers become more accustomed to paying market prices for goods and services in all sorts of environments, even in onsite foodservice where subsidized dining had always been seen as an amenity.

“The nonsubsidized model in onsite foodservice is still relatively new,” cautions Georgie Shockey, principal for the Ruck- Shockey Associates consulting firm. “It will take a while to get to the commercial operating model, but that is definitely the direction it is headed.”

How far to push commercialization depends of course on the segment and the particular venue. In many colleges, for example, straight-out retail pricing outside of the board dining hall is now a given, while in healthcare, a lingering sense of entitlement to a subsidized dining amenity by the staff sometimes impedes price restructuring. The 2006 HFM Membership Survey, for instance, indicated that nearly four in 10 hospitals continue to offer employee discounts in their retail food operations.

B&I has seen a de-emphasis on subsidy in recent years. Sometimes, that has resulted in the elimination of the inhouse dining amenity altogether, but in many other cases, the result has been an evolution toward “street” pricing and a sink-or-swim P&L approach that has challenged the operator—most often an outside contractor—to tackle the street head-on.

The aggressive commercial pricing mindset necessary to be successful in this competitive arena may not come naturally to operators weaned on the more forgiving attitudes (and bottom line expectations) of traditional onsite foodservice, but it is an increasingly necessary skill.

Here are some suggestions for improving your pricing strategy and embracing your inner capitalist.

One of the simplest and most effective approaches to pricing strategy is “menu engineering.” The concept is not new. It was first described in a book titled Menu Engineering: A Practical Guide to Menu Analysis, published way back in 1982 by Michael L. Kasavana and Donald J. Smith. Others have added to the theory since but the basic idea has not changed.

Obviously, your Star items should be the most prominent things on your menu board. Because they are already popular, marketing them mainly involves reminding the customers that they are available while on the pricing front, your best bet is to let them be. They are already generating high profit as well as lots of profit dollars because you are selling lots of them.

On the other hand, you should seriously consider increasing your prices on your Workhorses. Customers already like them—they are popular—so you could have a window of opportunity to nudge up your profits on these items with a judicious price increase. On the other hand, be careful that you don’t kill the goose that lays the golden eggs. Some items are popular in large part because they are not pricy.

The opposite problem exists with Cash Cows, which yield high margins, but low sales. You could consider a price cut—or try a temporary special or sale price—to see if you could nudge up the popularity. Sometimes, a bit of a price scaleback yields enough additional sales to make up for the dip in margin. Don’t become a victim of margin worship: your goal is ultimately to maximize your profit dollars, not your margin percentage.

Finally, you should regularly prune the Dogs from your menu unless there is a compelling reason to keep a certain dish (e.g., vegetarian and vegan items that earn their keep because they placate a small but often very vocal minority).

As you tweak your menu mix to maximize Stars, eliminate Dogs and fiddle with Cash Cows and Workhorses, remember that it will never be perfect. Tastes will evolve, customers will change and even the very action of changing your menu will alter the balance. It’s impossible to have a menu of all Stars (or, God forbid, all Dogs). Since the categorizations are relative, popularity is ultimately a zero-sum game and margins are measured against an overall target that not every item can exceed (if they did, the target should logically be adjusted).

Traditional onsite foodservice has been unable to get commercial-caliber prices because its offerings are often perceived as “generic” and not worth the premium earned by branded alternatives. Hence, one of the most popular strategies for price boosting is establishing in-house “brands” that replicate commercial concepts and hopefully command similar prices. “You can blur the distinction between your operation and an established national brand as long as the concept, menuing and ‘look’ parallel what the commercial enterprises do, and then you can expect comparable prices,” says Susan Wilkie of Wilkie Enterprises and former director at the University of San Diego. There she was responsible for implementing many of the school’s pioneering retail concepts.

This does not mean, Wilkie cautions, that any station can become a branded concept just by slapping a clever name on it. “Branding is not just signage,” she emphasizes. “It is developing a simple menu with a consistent product that mirrors the commercial experience of the customer.”

Eric Lenard, senior consultant with the Envision Strategies consulting firm, agrees. “Anytime anyone does anything they call it branded, but in order to be branded it needs to be replicated and recognized, a comfortable retail environment. What you have now are not so much branded environments as designed environments.”

Commercial brands do help set price expectations for unusual dishes with which they are associated. Don’t be afraid to copy exotic concoctions from the commercial world and then set prices according to the expectations set by the street.

Commercial chains can also do your market research for you, Lenard offers. He suggests researching the core of the menu boards of the commercial enterprises around your operation and using that as a guide for setting prices in your own branded retail concepts.

“Chart the price range of the items at the core of the menu board and that will give a good indication of what the market will bear. Chains employ millions of dollars worth of MBA talent to make these evaluations.”

The Psychology of Prices

Why are items often priced in seemingly awkward increments, like $5.99, rather than the much simpler $6.00? Obviously, it’s because the consumer habitually uses the initial figure as the benchmark when making a purchase decision, and the 5 rather than the 6 as the lead number has significance way beyond the penny difference. But the psychology of price increments goes much further, says Gregg Rapp, principal of the Menu Technologies menu consulting firm. For example, there is a psychological difference between $5.99 and $5.95 too.

“The 95 is friendlier than the 99,” he says (perhaps because the 95 implies that the operator could have—but generously decided not to—max out at 99?). So $5.95 is a friendlier price than $5.99, while a round figure like $6.00 has attitude. It says, you will want to pay this price because the item is worth it.” Generally in onsite environments, Rapp suggests using “95s” on high-volume dishes and saving the quartile increments like 25, 50 and 75 for low-volume items.

Give customers the opportunity to spend more. Delegate a portion of your retail operations to pricier menu choices if your population warrants it. “People don’t want to do business over burritos in the cafeteria,” says Shockey. “See if you can accommodate a venue in your retail mix that may have a higher food cost but also menus more expensive entrees for those who prefer that.”

Use occasion pricing. Most operators shun dollar menus, but it could be a winning strategy for adding incremental business during slow periods without cannibalizing sales during peak times.

Use high-impact extras to boost prices. “A club sandwich can become an avocado club sandwich selling for a dollar more with the addition of 25 cent worth of avocado,” notes Shockey.

Romance the menu descriptions. Another Rapp suggestion: “don’t use generic terms for the dishes; instead, describe the cooking method and the ingredients, listing the most expensive ones first.”

Menu only the combos. If you want to market combos, then put only those on your menu board, suggests Wilkie. “If people want the individual components, let them ask, but don’t encourage that by posting prices for individual items.”

Consider breaking up the combos. Going to a la carte pricing with a low price point on the entree might give you a better check average by enticing diners to buy sides and a drink after feeling they “saved” on the entree.

Take advantage of beverage spendthrifts. The price sentsitivity onsite customers often express toward food choices seems not to apply when it comes to beverages, whether it is pricy “coffee” drinks or new age bottled beverages. Take advantage of this to jack up check averages.