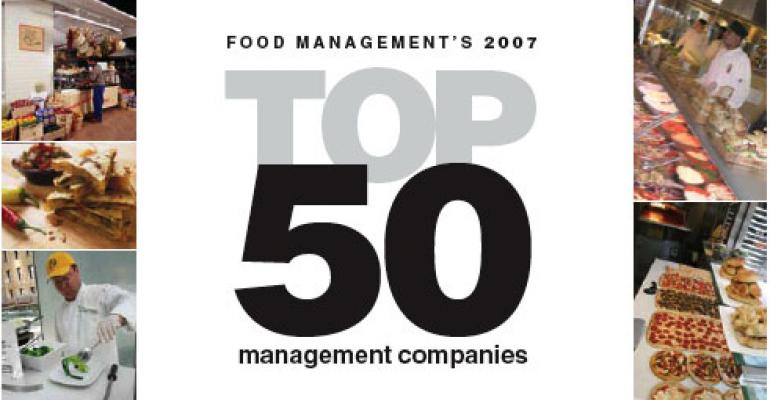 Since there were no acquisitions of Top 50 firms over this period, the overall gains came largely from a combination of growing volume at existing accounts, including vending and facility management business, and from self-op conversions.

The Top 50 is confined to firms that operate significant manual foodservice operations, whatever else they may do. For this reason, companies that are, for example, exclusively vending specialists or caterers are not included.

While the Top 50 is an excellent resource for determining the major national and regional players in the contract foodservice sector, caution should be exercised before drawing larger conclusions about a company's market position simply from its nominal standing on the list. Onsite foodservice is a remarkably varied industry encompassing operations in a wide variety of environments, from school lunchrooms to football stadium skyboxes. Given this diversity, one should review the business summaries for each company to get a more accurate picture of its market activity.

Another complicating factor: contract terms that affect the revenue a contractor derives from a particular operation may obscure the scope of what is being managed. For instance, a contractor may get more top-line revenue from a modest-sized P&L operation than from a straight fee arrangement that actually feeds many more customers. For this reason, some contractors prefer to speak in terms of "managed volume," the amount of business the company "manages" in the sites in which it operates, irrespective of the contract terms and the actual revenues the contractor realizes from its activities.

In the Top 50, we use the gross revenue number that reflects the dollars companies put on their top line rather than managed volume because in the end, a company's size is most accurately indicated by its gross revenues.

Through the first half of fiscal 2007, the percentage dropped slightly to 41%. However, Americas Division posted a robust 7% overall growth rate over the period, led by Chartwells in the Education segment and Levy Restaurants in Sports & Leisure. Both grew 9% over the period.

The unit continues to emphasize its Balanced Choices healthy dining program. At of the end of fiscal 2006, more than 700 North American accounts had implemented it.

Compass also inked an exclusive partnership with Martin Yan for a new Pan-Asian program. It will feature Yan's signature recipes and products and will be available for all sectors. Another deal brings the O'Naturals concept into Compass managed units (O'Naturals is a commercial "natural and organic food" restaurant concept launched in 2001 by Stonyfield Farms President/ CEO Gary Hirschberg). In-house-developed new concepts include Naked Pear Café, a cross-segment program that emphasizes natural and healthy offerings

On the operations front, Canteen completed the rollout of its I-vend route accountability and cash control system.

Chartwells's Pulse On Dining program has been fully implemented in three higher education accounts. Bon Appetit Mgt. Co. continues to be at the forefront of the sustainable/natural foods movement. It announced a "carbon footprint" reduction policy through which it will purchase as much product as possible within 150 miles of where it is to be served. Also new is a ground beef purchasing policy that mandates no use of human antibiotics as feed additives. Bon Appetit says purchases from local producers reached $55 million in 2006, 30% of its total food purchasing expenditures.

Aramark's major news last year was the $6.3 billion buyout of the company by a group of investors led by CEO Joseph Neubauer. That took the company private after five years as a publicly traded entity.

Aramark also made a number of acquisitions in the vending/OCS field in the past year. Among the food programs it recently rollled out are Catch of the Day, a healthy seafood initiative aimed at the K-12 segment. The company also introduced AMP Up with Breakfast for K-12 environments. It comes with easy-to-implement delivery options and a focus on convenience.

Sodexho, Inc., is the North American division of Paris-based Sodexho Alliance. The unit generates about 43% of the parent company's total revenues, and about half of its food and management services revenues. In fiscal 2007 North American revenues posted a 7.7% increase over the first nine months of the year. It was led by the healthcare and education segments, which grew 8.4% and 8%, respectively.

The unit has a new CEO, George Chavel, who succeeds Richard Macedonia. Also retiring is long-time School Services head Rod Bond, who is being succeeded by Lorna Donatone. Other key appointments: Scott Boynton to division vice president of vending services for the Business & Industry Market unit and Husein Kitabwalla to senior vice president of the Retail Brand Group.

In other major moves, Sodexho opened the Desert Willow Conference Center in Phoenix. It is the first day conference center built by the company. Sodexho also kicked off a program to implement MasterCard's PayPass system at its corporate dining sites.

In other news, parent company Sodexho Alliance has decided to delist itself from the New York Stock Exchange. It will continue to be traded on the Euronext exchange.

Delaware North has continued to move forward in areas such as health, convenience and sustainability. It undertook a movement to eliminate trans fats from the menus in each of its divisions and expanded the use of local ingredients in its Sportservice

In its airport operations, DNC added a grab-and-go concept with more attractive recyclable disposables and packaging. It also developed more interactive dining modules. For instance, by eliminating chafers in Sportservice-managed venues, 60 percent of the food items served are now prepared in front of customers.

There is also a renewed focus on expanding catering opportunities on non-game days at its sports venues. On the culinary front, DNC has committed to ensuring that all its salaried chefs are ACF certified by October 2008. Also, the company promoted Roland Henin to corporate executive chef and chief culinary ambassador for global hospitality operations. Henin is one of only 60 certified master chefs in the United States. Note: The numbers above are for U.S. operations only

Centerplate is a major provider of catering, concessions, merchandise and facility management services.

Its clients include six Major League Baseball and 10 NFL teams and two NBA and two NHL franchises. The latest is the new New Jersey Devils arena scheduled to open this fall. Sales through the first six months of 2007 were $326.2 million.

Most recently, Centerplate was selected by the Louisville Arena Authority to operate the catering and concessions services for its planned 22,000-seat downtown arena. The venue will serve as the home court for the University of Louisville's men's and women's basketball teams and will open in 2010.

AVI remains one of the nation's largest vending and office coffee services providers. In recent years, it has been concentrating on building its manual foodservice business. This now generates around $50 million in annual revenues.

The manual foodservice operations are divided between two divisions. One serves institutional clients like colleges and hospitals. The other operates in B&I in conjunction with the much larger vending group. Onsite dining clients include the University of Michigan Medical Center, the Cleveland Clinic, Slippery Rock University of Pennsylvania, Kenyon College and Delphi Corp.

Guckenheimer has grown from a West Coast regional player to now operating in over two dozen states. It continues to focus on emphasizing fresh, natural and authentic ingredients and from-scratch food preparation. The company is trying to meet increasing customer demand for healthy cooking techniques and vegetarian/vegan selections.

It has also introduced a number of POS advertising, discount couponing, food sampling and giveaway programs to build customer satisfaction and participation rates. Among newly opened operations are the café and coffee bar at Humana's headquarters complex (see story on p. 50).

Guest Services is a public ben- efit corporation with no stockholders (after-tax income is either plowed back into the business or given out as loans and grants to tax-exempt organizations). It derives about half of its revenues from dining, retail, catering and concessions operations, with its Lancaster Foods subsidiary wholesaling fresh produce and flowers to account for the rest of the volume.

Recently, Guest Services opened two dining facilities at the new National Museum of the Marine Corps. One is a fine dining operation and the other a casual cafeteria-style eatery. It also added veteran hotel/resort chef Fred Raynaud as corporate executive chef. The Lancaster Foods division recently purchased a 215,000-sq.ft. warehouse in Jessup, MD. That will double its capacities in produce distribution.

Thompson is one of the country's largest minority-owned businesses. It operates both franchised commercial restaurants and onsite dining sites. Both sides are expected to benefit from last fall's acquisition of the Austin Grill Tex-Mex chain.

In addition, the company is putting more focus on healthy menu options. It launched a zero-trans-fats initiative at its college dining sites. These include community and historically black colleges and universities like Alcorn State, Northern Virginia CC, Chicago State and Virginia Union. Thompson has also developed programs to better serve physically and visually challenged diners and to mentor minority and small suppliers. The next substantial business move will be an expansion into the healthcare segment.