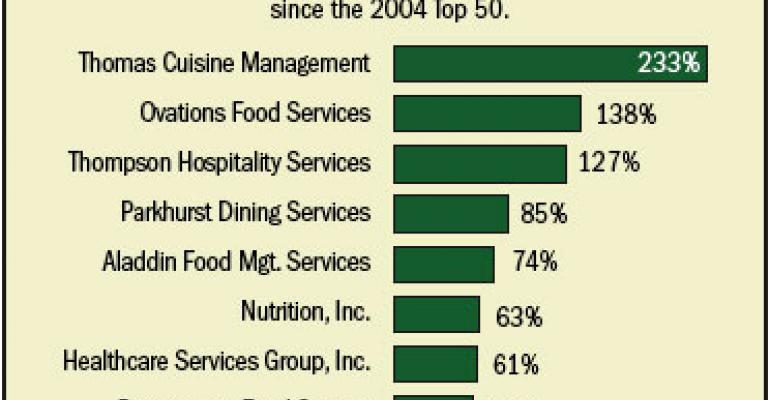 In its onsite operations, Whitsons implemented a zero trans fat policy across all accounts. In the corporate dining area, it expanded its Veggie Table vegetarian concept with new menu offerings. It also kicked off a once-amonth baking demonstration program.

Taher operates primarily in the Upper Midwest. Over the past year, it has increased its focus on serving fresh food. This includes more vegetarian menus and healthy selections. Taher has also increased its selection of graband-go items.

The company also added budget for training, particularly in the areas of HACCP, sanitation and customer service. In the operational end, it has made a major move toward local market purchases of fresh product.

It also eliminated trans fats from its offerings and redesigned its menus to include more from-scratch selections.

Southern recently completed arrangements with Quiznos to install 25 of their units in Southern-managed corporate dining facilities. It has upgraded its arrangement with Starbucks from a "We Proudly Brew" concept to a full-service master license agreement for Starbucks branded coffee shop operations. The first is currently under construction in the lobby of the American United Life Tower in Indianapolis. The company also rolled out the Boar's Head's upscale product line in its traditional deli stations.

Among its own brands, Southern expanded its ShowPlace presentation cooking program, using it to replace many of its traditional entree stations with a cook-to-order format. The company also upgraded its Culinary Classics grab-and-go concept. The enhancement includes a line of "made fresh today" items like packaged entree salads and gourmet sandwiches offered from airscreen coolers.

On the technology end, Southern expanded its iCafé program to incorporate nutritional analysis along with easy-to-order catering and delivery services.

Metz introduced two new concepts in the past year. One was the upscale coffee/grab-and-go InterMetzo Café. The other was Bordertown, a from-scratch Mexican/Southwestern themed concept. The company's Market Pure initiative, which divides the business into segment-specific divisions, was extended to the culinary area. Oversight of menus in each division has been assigned to different culinary specialists.

Another new initiative is HealthChecks. HealthChecks is a signage program that points out healthy menu items quickly. Also on the nutrition front is a redesigned mascot, Commissioner Nutrition. The mascot is part of the company's Wellness Friends K-12 nutrition education initiative.

Last January, Aladdin acquired Ameriserve Food Service Management. Ameriserve was a regional school/college specialist headquartered in Columbia, MO. It operated in seven Midwestern states. Aladdin now operates in 20 states across much of the Eastern half of the continental U.S.

Treat America's significant volume jump was primarily the result of its March 2006 acquisition of Swansons Corp., a former Top 50 company (#35 on the 2005 list). The acquisition is really reflected for the first time in the 2006 fiscal numbers. It added over a thousand sites—mostly vending and office coffee—to Treat America's portfolio (the contracts listed are for manual foodservice operations only).

Vending and office coffee now account for about half of Treat America's volume. The company also owns and operates the venerable EBT restaurant in the former Emery Bird & Thayer department store location in downtown Kansas City, and the Union Café in Kansas City's historic Union Station.

Crystal has been a division of Marsh Supermarkets (Marsh and LoBill supermarkets, Village Pantry c-stores) since being acquired in 1995. The unit derives over a third of its revenues from catering and much of the rest from a combination of manual foodservice, vending, OCS and concessions.

Last fall, Marsh was acquired by an affiliate of the Sun Capital Partners investment firm. The new ownership proceeded to close some stores and downsize the workforce. Crystal has continued to operate through the changes. Its Crystal University program provides continuing education and professional development opportunities for both managers and staff employees.

Cura is one of two onsite foodservice divisions of the Eat'n Park Hospitality Group's Onsite Brands Division (the other is #20 Parkhurst Dining Services). In the past year, the company introduced Flavors of Home, a traditional dish menu program. It utilizes ingredients sourced through the company's FarmSource local procurement initiative.

Unidine continues to grow, partly through acquisition deals. In the past year, it acquired a pair of catering firms, Celebrations Gourmet Catering of Boston and Corporate Catering of Danvers, MA. It also purchased a 49% share in Boston-based City Fresh Foods last November.

City Fresh is a minority-owned foodservice company. It has about three dozen clients in the education, senior services, government and business dining segments. Unidine also continues to push sustainability and health initiatives and is piloting a patient satisfaction improvement process in its hospital-based operations.