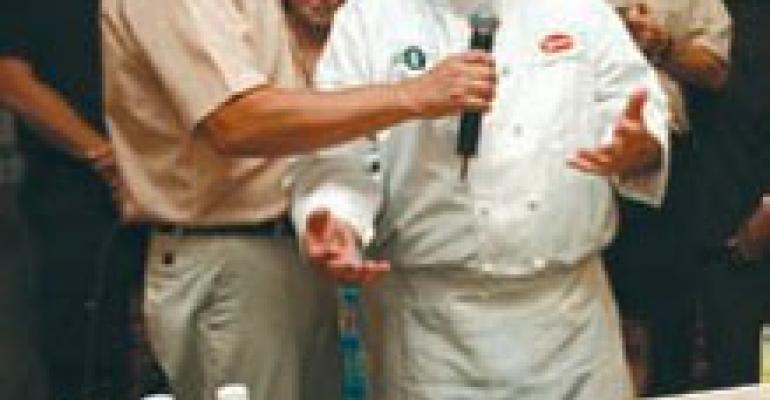 From French to Swedish

He has a Cordon Bleu degree and has been a chef in both France and New York. He has run his own

restaurant, managed dining and catering for a European embassy and even got bawled out by hotel queen Leona Helmsley after (briefly) serving as her personal chef.

But it's fair to say that Eric Eisenberg has never been more happy and content than he is today. He recently started his second year as the executive chef at Seattle's Swedish Medical Center, a position he is the first to hold.

At Swedish, Eisenberg oversees a culinary department that involves more than 200 people, five retail locations, patient meals for two hospitals with a total of 650 beds and a catering operation with more than a million dollars in annual revenues.

It is the end point of a journey that has taken him from an initial flirtation with theater that grew into a greater interest in cooking.

Following the Cordon Bleu experience, Eisenberg led a nomadic expatriate chef's life in France, working in a number of restaurants as well as earning room and board by serving as in-house chef for a French doctor's family.

When he returned to New York (he grew up in Brooklyn), he did the restaurant thing and also spent time as the executive chef at the Luxenburg embassy.

Eventually, he decided to follow some friends to Seattle, where he again got into restaurant work—including one stint owning his own place—and then spent time with a country club and with a startup bakery cafe chain. Bored as a "glorified cake maker," he ran across the job opening at Swedish on the Internet in early 2005 and has never regretted it

What did you know about hosptal foodservice when you applied?
"I did know about their room service program because I had been a patient at Swedish a few years earlier. So I was familiar enough to know that the quality was higher than the norm, but I expected it to be very different from what I'd experienced before. I thought I would be a pencil pusher. I though they wanted a guy who would walk around and count things."

And...?
"In many ways it has been the most challenging position of my career. My ability to be creative at key times is enough to keep me happy. In addition, I've had the opportunity to travel, to compete [Eisenberg and Nutrition Services Director Kris Schroeder recently won first place at the HFM Culinary Competition held during the group's 2006 National Training Conference in Orlando] and increase my participation with national culinary and chef organizations."

How did you wind up at the Cordon Bleu?
"After I got my degree in theater arts from New England College, I went back to New York and worked in commercial kitchens while looking for theater jobs because I knew how to cook. The chef at the Manhattan Ocean Club, where I was working, encouraged me to go to France to study the culinary arts because he saw real talent in me. Originally, I only intended to stay for a short time, just something to polish my resume. But when I got to the Cordon Bleu, I became a chef's assistant, which gave me a lot of free tuition, so I ended up taking the whole program and got the Grande Diplome. I then stayed in France and worked at a number of places, including Michel Rostang in Paris and Chateau D'Artigny in the Loire Valley."

What great experience for a chef! What stands out from those years in your mind?
"I remember we were doing sous vide—which is becoming more in vogue here now—15 years ago at Chateau D'Artigny. But aside from that, it was just a saturation and submersion into the importance of food. Our job was to make sure we treated everything that would eventually go on a plate with the utmost care and respect."

Why not stay in France?
"My parents both became very ill, so for personal reasons I had to return. After they both passed away, I seriously considered returning but finally decided to stay. I worked in New York for several years, then joined some friends who had moved to Seattle some years earlier. I bought and ran my own place for a while, then sold it and did a number of things before finally landing here with Swedish Medical Center."

What's the Leona Helmsley story?
"This was after I came back to New York from France, and it literally lasted a week. I never saw them for the first six days, and by the eighth day I was gone. I had cooked two meals Leona Helmsley loved and then a dinner she hated. The next day I was gone."

What was the meal?
"She wanted me to make a pork paprikash from her mother's recipe, which I did. Unfortunately, it didn't taste like she expected, so the venom spewed forth. A kid who worked there as my assistant told me to let it go, that ‘she treats everybody like that,' but I decided I didn't want to spend my time sitting in a house in Greenwich, CT, getting yelled at, so I quit."