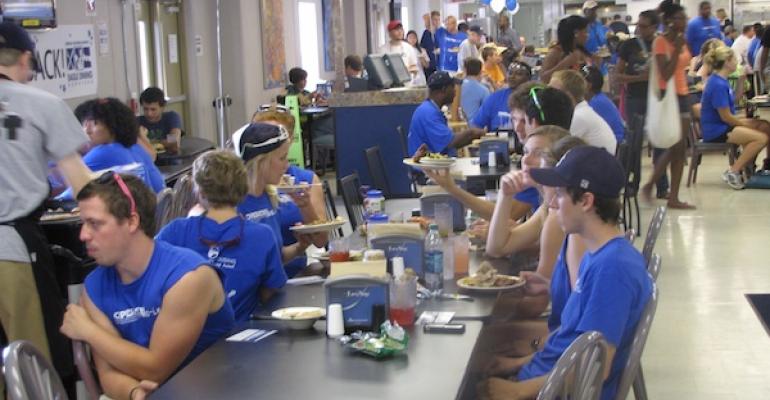 tudents at Georgia Southern University take their meals in the temporary “Nest” dining hall put up by Kitchens 2 Go in a parking lot while the school rebuilds/renovates two of its dining hallls.
Archive

Georgia Southern uses a temporary facility while both permanent dining halls are closed for renovation/reconstruction.

The campus dining services at Georgia Southern University were getting a bit long in the tooth. One facility, Landrum, was of 60s vintage and very much looked its age while the other, Lakeside, while only about 20 years old, was in desperate need of a makeover.

“We could have undertaken the projects separately, but that would have meant disruptions for an extended period,” says Dining Services Director Jeff Yawn. “We decided we would be better served if we took on both at the same time.”
Of course, since Landrum and Lakeside are Georgia Southern’s only two board dining centers, that posed a bit of a problem, even though the meal plan does offer equivalency options at the various retail outlets on campus.

Instead, the school hired a third party to put up a temporary dining facility on a parking lot. Called the Nest (Georgia Southern sports teams are the Eagles), it’s designed to provide all-you-care-to-eat dining from seven food stations throughout the 2012-13 school year. Both Landrum, which is being demolished and totally rebuilt, and Lakeside, which is receiving a major renovation, are slated to reopen in time for the fall 2013 semester.

The menu at the Nest is not only varied—stations include the Tilted Skillet entrée concept, La Bistro, All Day breakfast, Smokey’s Barbecue & Grill, HomeStyle Pizza & Pasta, Think’n Green salads and Sweet Spot desserts and pastries—but also will preview new menu items intended for the new permanent dining hall menus when they reopen.

The temporary facility has enough seating to accommodate the combined customer counts of the two closed facilities, which saw an average of about 5,000 students a day between them, Yawn says.

With an enrollment of around 20,000, Georgia Southern has a meal plan base of about 7,200 students, half of them freshman who are required to purchase plans. The prospect of having to eat at a temporary facility doesn’t seem to have affected voluntary meal plan sales: counts remain at traditional levels so far, Yawn says.

In addition to the dining halls, Georgia Southern Dining operates some 30 other foodservice outlets ranging from a pair of c-stores (including the Pickel Barrel, which specializes in healthy options like fresh produce and specialty beverages), the full-service Talons Grille restaurant, and a mix of self-branded concepts and commercial brands like Chick-fil-A, Starbucks, Einstein’s Bagels and Cold Stone Creamery.