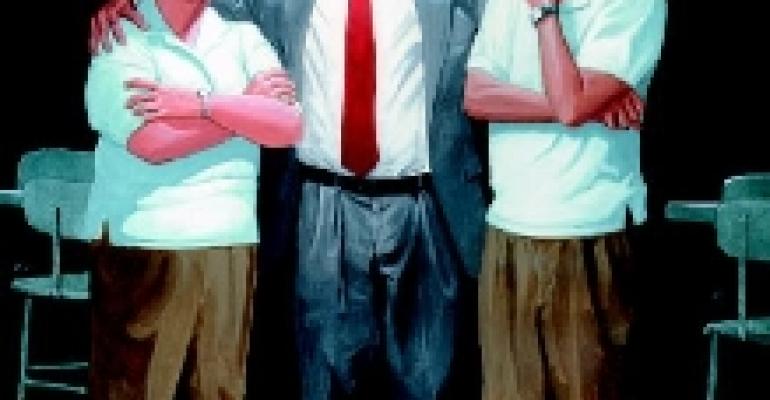 THERE S BEEN PLENTY OF DISCUSSION (AND MEDIA COVERAGE) lately about the changing ethnic diversity of America and how employers are dealing with the challenges associated with it. In fact, many businesses have speci c (and sometimes extensive) diversity training programs in place. Heck, there s even a whole association in our industry devoted to the subject.

But what about generational diversity? Are employers paying enough attention to this aspect of the diversity puzzle? They should be. Consider the following.

It s easy to see that the age make-up of the labor force is changing (some experts have called it the new generation gap ). What may not be as apparent is how managers can best handle the challenges and opportunities inherent in an age-diverse workforce.

Claire Raines, a leading expert on generational issues and author of Beyond Generation X: A Practical Guide for Managers, sums up the challenges associated with generational diversity:

Ten years ago, individuals of similar age worked together, and were pretty much separated from other age groups, she explains.. Baby boomers were high-level managers and Gen Xers were working in other parts of the same business. Today, that s completely rearranged. The workplace is a real hodgepodge. The Boomers are working side-by-side with the Gen Xers and now with increasing numbers of older workers.

So what s the key to managing in the changing fabric of the workplace?

The most important step is to accept that the different generations in your workplace probably do not share the same work ethic, interests and expectations. Each age group brings its own attributes to the workplace, and more diversity in age means more diversity in values and expectations. Formerly effective management tools may now be less useful.

Experience and seniority no longer rule the job market, says Bruce Tulgan, author of Managing Generation X, and many of the old management strategies are fast becoming obsolete.

More advice: Learn what the differences are between the generations represented in your operation (see sidebars) and use existing synergies to create programs and workplace environments that foster intergenerational cooperation. This can help ensure that workers from different age groups feel comfortable working with you and their co-workers, regardless of age.

Remember, each employee, regardless of age, race or gender, brings something unique to the workplace. It s up to you to harness employees best qualities.. Doing so will result in lower turnover, less misunderstandings and a happier workplace.

Strategies that Work
Let s look at some strategies you can use to successfully manage generational diversity in your workplaces. Avoid stereotyping and acknowledge, consciously or not, that you may harbor age biases. This advice pertains to employees of all ages. For example, Gen Xers (born between 1960-1980) are often labeled as lazy and bored while older workers are thought of as unable to do physical work or set in their ways. While this may be true in some cases, experts say that managers need to evaluate every employee on his or her own merits.

To do this, a manager has to make a conscious effort to set aside any biases, which is not always easy to do, notes Catherine Fyock, president of Innovative Management Concepts. Fyock has implemented age-related diversity plans for many corporations, including those in foodservice, and is an expert in hiring and managing older workers.

Danes offers similar advice in her book. Labels can be very dangerous. They can lead to stereotyping. They can be self-fulfilling and oversimplify people, allowing folks to categorize others rather than getting to know them as individuals.

It is especially important to dismiss biases in the hiring process. Make sure that you are evaluating each applicant based on his or her job quali cations, not based on the person s age, Fyock stresses.. It s too easy to dismiss someone based on the age. Make no assumptions, she adds..

Make your expectations clear and standard for all employees, regardless of age. If you re assuming your employees think just like you and know your expectations even though you ve not discussed them you are likely to have problems, Raines warns.

Most employees, both young and old, expect and want to have one standard for all workers.

I set clear work standards and parameters for all my employees, regardless of age and I hold our staff to them, says Ken Arledge, cash operations manager at the University of Montana, Billings. I don t say, Well, that s okay for you to do such and such because you re a student or you re an older worker. Average work is not acceptable to me or to our customers.

Be aware of the different work and life experience levels workers bring to a job. And encourage others to do likewise. For example, many older workers are often frustrated by the immaturity of younger workers and their lack of professionalism. The same goes for younger workers lack of appreciation of older workers attitudes and work habits developed through years of experience. Managers must foster mutual respect among workers, either by example or through direct communication, in order to help reduce possible con icts.

One way to foster mutual respect is to encourage mentor-type relationships, either formally or informally, between employee groups. These relationships help foster an atmosphere of respect between older and younger workers.

For example, one kind of formal mentor relationship may pair a less technically-savvy older worker with a younger, computer whiz kid who can teach the former how to use the department s new computer. Informal relationships usually come about naturally and often develop when a younger worker turns to an older one for advice, such as how to deal with a dif cult manager or a personal problem, says Fyock..

Create workplace environments that provide and address the bene ts and workplace issues that are important to each employee age group. Both older and younger workers have some common preferences when it comes to their workplaces, but there are some differences (see sidebars).

For example, younger employees generally prefer to be given a task, to have the task explained and then be left alone to gure it out for themselves. They don t want supervisors and managers looking over their shoulder.

Seniors, on the other hand, tend to be a little less con -dent and may need a little extra time or training to learn a task. They also are more likely to crave reinforcement for a job well done.

The goal is to create an environment in which all employees are comfortable and willing to work. This means that managers must recognize age-related differences and tailor programs and incentives that take into account employees various needs.

Provide exible work schedules. Most workers, regardless of age, want exible work hours but for different reasons. Managers must take these considerations into account when hiring and staf ng their workforces. Otherwise, employees are more likely to be unhappy and, ultimately, seek employment elsewhere.

For example, most senior workers, especially those returning to the workforce after retirement, generally want to work part time or in some cases, need to work part time in order to protect their social security bene ts. Younger workers may need time off to attend classes or family functions or may have to work around other job responsibilities. Or as many operators reported, they have outside priorities that, at least in their minds, are more important than work.

We used to be pretty strict on how much time our student employees took off in the summer, says Pat Miller,, director of dietetics at Seton Health System, Troy, New York. But now we are a lot more lenient and willing to accept a wider variety of excuses for absences because we d rather give them the time they want and keep them on the payroll than have to try to hire someone to replace them.

Recognize the entitlement mind set and try to modify it. Both seniors and younger staffers often harbor a kind of you owe me mentality and this can make a manager s job particularly challenging.

Older workers, especially those who have worked here a long time, often want to choose their own work function, think that they shouldn t have to do certain work, and believe they are entitled to certain consideration, says Jill Lansing, foodservice manager at Wisconsin Electric, a self-operated foodservice operation in the Milwaukee-based company.

Younger employees often have that you owe me because I m here attitude. It s very dif cult to deal with these mind sets.

Younger workers today are less career oriented and much more likely to call in sick or to take the day off for very minor reasons, she says.. Debonte believes that many schools liberal policies toward absenteeism are partly to blame for this mind set among the younger generation.

If they can miss 20 some days of school per year, they think it s okay to miss that much work as well.

In order to overcome this mindset, managers should look for ways to instill job responsibility in workers who lack it. How?

I stress the important role they play in our department, how they are part of the team, and how their absence affects other team members tasks and the whole department, Debonte says..

Teaching responsibility, especially to younger workers, can be a very dif cult task, especially when many of them don t learn it at home. It s twice as dif cult to learn it on the job, Lansing adds..

For example, younger workers today don t like face-to-face confrontations and in fact consider them to be potentially dangerous, says Art Main, area manager at the University of New Hampshire.

If a student worker has a problem or a concern, they are more likely to send me an e-mail about it and they expect me to respond the same way, he says..

Miller agrees, and adds, Our older workers are more likely to come directly to me with problems, she says.. Our night crew, which is mostly younger employees, will mope around and be frustrated about something but instead of coming forward, they prefer to wait until I ask them what s wrong. It s very frustrating.

As for younger workers, author Raines says that Gen Xers have a work ethic (despite rumors to the contrary), but that they have seen the long hours their parents have put in and the physical and emotional toll those hours have taken. Gen Xers are willing to work their assigned time, but not over-time. They want balance in their lives, time to spend with friends and outside activities.

Debonte sees this rst hand in her operation and says that her younger staff members don t display the same level of commitment to the entire facility as some of the older workers do.

They are there to put in their time and don t always look at the big picture and how their work and our department interacts with the rest of the facility, she says..

Find common ground. I m 43 and I don t have a whole lot in common with our younger staff and that makes for some managerial challenges, says Miller.. She did discover however that once she revealed to some of them that she attended the same university many of them do, suddenly, I was cool!