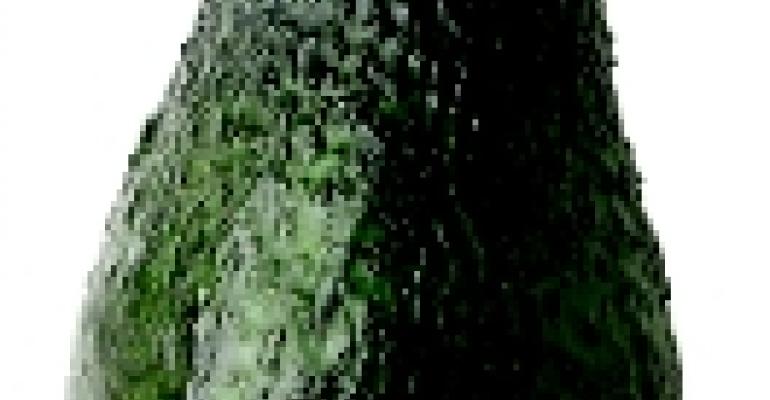 "Myth: Burying the avocado seed in the guacamole
helps to maintain the avocado's color."

Guacamole's star ingredient, the avocado, is easy to cut, seed and scoop, making nearly the entire fruit available for slicing, cubing or chopping into appetizers, soups, salads, entrèes or spreads.

Native to the tropics and subtropics, the avocado is a rich fruit known for its lush, buttery texture and mild, faintly nut-like flavor.

Florida was the site of the first U.S. avocado trees in the 1830's, however the largest percentage of today's crop comes from California as well as Mexico and Florida.

Originally dubbed an "alligator pear," the many varieties of avocados can range from round to pear-shaped.The skin can be thick to thin, green to purplish black and smooth to pebbly.The avocado's pale yellow-green flesh is creamy and succulent.

The two most widely marketed avocado varieties are the pebbly textured, almost-black Hass variety and the green Fuerte variety, which has a thin, smooth skin. In fact, more than 90 other varieties are also grown worldwide, although these are typically available only as specialty, seasonal items.

Depending on the variety, an avocado can weigh as little as three ounces and as much as four pounds. The avocado's taste and nutrient profile has led to rising consumption patterns.

In fact, the latest research from the California Avocado Commission, reveals that avocados rank highest in nutrients and phytochemicals such as monounsaturated fats, foliate, potassium, and magnesium among the 20 most mostfrequently consumed fruits.

With their high water and fiber content, avocados are also low in energy density, which means they can support a healthy body weight. Studies suggest that the monounsaturated fat in avocados boosts HDL (good) cholesterol and lowers LDL (bad) cholesterol, while simultaneously helping protect against a variety of diseases.

When preparing avocados, first slice lengthwise around the seed. Next twist the halves in opposite directions to separate. Slip a spoon between the seed and the fruit and work the seed out. Then either peel the skin back or slip a spoon between the skin and fruit and scoop away from the peel. If the avocado is too soft for either, it's prime for guacamole and other spreads.

Ripen to attention
Avocados will not ripen while still attached to the tree. Even once the fruit has reached full size and maturity it will not soften to an edible consistency unless picked. Over the years, this characteristic has helped the avocado growing industry better manage the seasonal "boom & bust" cycle typical of most fruit harvests, and also has tended to make pricing less volatile.

"While the mechanism remains a mystery to science, it is thought that the fruit receives a signal from the tree through the attached fruit stem which keeps the internal metabolic ripening system inactive," says Guy Witney, director of industry affairs, California Avocado Commission.

Once picked from the tree, the fruit's natural ripening system activates, taking from five to 15 or more days to soften the fruit.

Hard, unripened fruit can be ripened at room temperature for 3-10 days, then stored in a refrigerator.

Looking to speed up the ripening process? Simply place avocados in a paper bag with an apple for two to three days at room temperature. Ethylene gas from the apple helps to ripen the fruit.

Suppliers can also provide fruit at various states of predictable ripeness within the same order.

"By exposing harvested fruit to a constant flow of ethylene in pre-conditioning rooms, we are able to provide a constant supply of ripe, ready to serve avocados," says Witney.

Only ripened avocados should be stored in a refrigerator, where at 36°F-40°F they'll be good for up to one week.

"The ancient Aztecs believed avocados had
the power to induce amorous behavior."

Once avocado flesh is cut and exposed to the air, it tends to discolor rapidly. To minimize this effect it is advisable to add cubed or sliced avocados to a dish at the last moment. When a dish containing mashed avocado, such as guacamole, is being prepared, the addition of lemon or lime juice helps to prevent discoloration. Be sure to specify the variety, size and ripeness when ordering avocados. Choose underripe avocados when selecting fruit for hot preparations. Avocados that are just beginning to soften develop a piquant flavor during cooking. Hot avocados retain their shape and color in most preparations. Avoid exposure to direct heat.