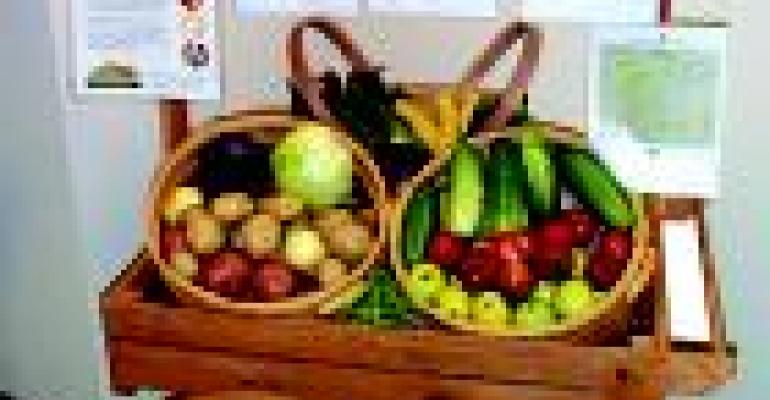 How to Buy From the Little Guy

As distributors struggle to accommodate local sources, onsite operators wishing to menu locally-produced food have often found themselves having to develop, nurture and maintain their own local supply relationships in parallel with their existing supply channel.

Time and Space
Given these obstacles, it's astonishing to see how many onsite operations are willing to take them on.

According to the Community Food Security Coalition, which tracks farm-to-school and farm-to-college programs, more than 400 school districts and 200 colleges had local buying programs last year, a number that has undoubtedly grown since. They join an expanding roster of high-end B&I operations, entertainment/arts facilities and private academies, and even some high-volume mid-level B&I, hospitals and eldercare facilities, that are starting local purchase programs.

Perhaps most crucially, the contract management sector has now also jumped on the bandwagon, a development that—given the purchasing power and broad market presence it represents—may spur more mainline distributors to devote attention to establishing reliable and efficient local-purchase programs.

"From a corporate perspective, we're trying to map out how we think we should best approach sustainability on a nationwide basis, since each market is going to be unique," explains Aramark Regional Manager Dave Shamel. His responsibilities include working with Yale University's high-profile Food Sustainability Project to procure local ingredients (Aramark manages Yale's dining operations).

"To manage that, we're working with Sysco and its operating companies to identify local suppliers and consolidate their products. We also work with a secondary supply channel. For example, there's a local producer in Connecticut called Fowler & Huntting that utilizes some 130 New England farmers. They bring their product to F&H's distribution center, where it's staged and then sent out to our customers. So rather than 130 farmers trying to deliver to all these sites, we have one."

Moore cultivates local grower contracts through state and local agricultural organizations (Pennsylvania Association for Sustainable Agriculture, the NY Dept. of Agriculture, etc.) and passes them to Eat 'n Park distributors. "For example, if I'm looking for tomatoes in Western Pennsylvania because the grower we use can't supply all of our needs," he says, "I may give a name to our produce distributor and say, 'Here's another grower.' So I'm sort of behind the scenes, pushing farmer names and saying, 'Give these guys a call!'"

Looking for a Few Good Farmers...
In expanding its Sustainability Project across all campus dining halls this fall, Yale has the benefit of lessons learned over the past three years at its pilot site.

Among the lessons: a flexible definition of local. "We don't want to draw a circle around the campus and say we won't buy anything outside of a 150 mile radius," says Dining Services Director Don McQuarrie says. "You want to be able to deal with folks who may be a little further-away as long as they support sound ranching or farming practices and you minimize the fuels used to get product to you."

Still, supply reliability remains a challenge. For instance, recently the grower supplying local tomatoes for a signature salsa had a crop shortfall due to excess rain, forcing a resort to alternate— California, in this case—channels. "But that's just part of the game when you're dealing with a project like this—you have to stay flexible and nimble," McQuarrie comments.

"Flexible and nimble" also applies to logistics. Mc-Quarrie cites one small spices/flavoring supplier. "He can't really make 11 stops around campus, but we have another supplier that repacks and delivers his products to our different sites along with its own product."

On a more modest scale, "We find suppliers through word of mouth" says Louella Hill, the "local foods ambassador" who works with Brown University to tap local food sources. "The word on the farm-street is that Brown is interested in buying."

Hill concedes that part of the reason Brown's program has had the success it has had—this fall it was using local apples, peaches, milk, eggs, honey, tomatoes and green beans and had just inked a contract with a processor to process Rhode Island potatoes—is that it is small enough to benefit from the efforts and enthusiasm of people like her. Hill is a recent Brown graduate who meets with farmers, organizes events and even takes a hand at loading and unloading trucks. Right now, the local product "basically complements the bulk of the meal, which is supplied by large, mainstream suppliers," she says.

Operations with more modest foodservice programs than a major university have had greater success in deriving more of their total food orders from local sources. The Unquowa School in Fairfield, CT, decided a year a go to commit to local purchasing as much as possible, and its charmingly Capra-esque catalog of suppliers illustrates the ad hoc nature of local sourcing.

In place of the major prime distributor it used in the past, it now uses a small local food purveyor that gets its produce from local farmers, says School Head Sharon Lauer. "We also have a relationship with the Farmer's Cow for dairy, with Stuart Family Farms Beef and we get our eggs from a farmer right up the road. There's also now an organic farm up the road, and they provide us with greens and other items in the fall and spring.

In Wisconsin, a program initiated by a group called Wisconsin Homegrown Lunch works with a grocery coop's central processing kitchen to chop and deliver locally grown green peppers, onions, potatoes and carrots to middle and high schools in the Madison district, where they are used to make soups.

"The orders are placed by the schools to the coop, which in turn contacts its local farmer suppliers" says Wisconsin Homegrown Project Coordinator Doug Wubben. "If an item isn't available locally, the co-op orders it from its distributor and gets it through their normal channels, just like for their retail stores."

Larger institutions are also beginning to experiment with local products, but, like the contractors, most prefer to work with major distributors because of volume demands. In California, the Kaiser Permanente hospital chain recently initiated a program to incorporate local product into patient meals through an agreement with distributor Lee-Ray Tarantino, a regional Sysco-owned fresh produce specialist. Local growers contract directly with Kaiser and work through the traditional packing houses that have supply relationships with Tarantino. The consolidated orders are then delivered by Tarantino to a central kitchen where Kaiser's patient meals are produced.

It's hardly a finely tuned machine, but those involved in farm-to-kitchen programs say their efforts are helping prepare for a more efficient system down the line.

"Once these things take root, they have a way of growing exponentially," says Chief Business Officer Dave McConnell of Kenyon College in Gambier, OH, where about a fifth of the dining hall menu—including dairy and meat as well as fresh produce—now comes from local sources. "Its just getting past those two or three years until you figure out the system."