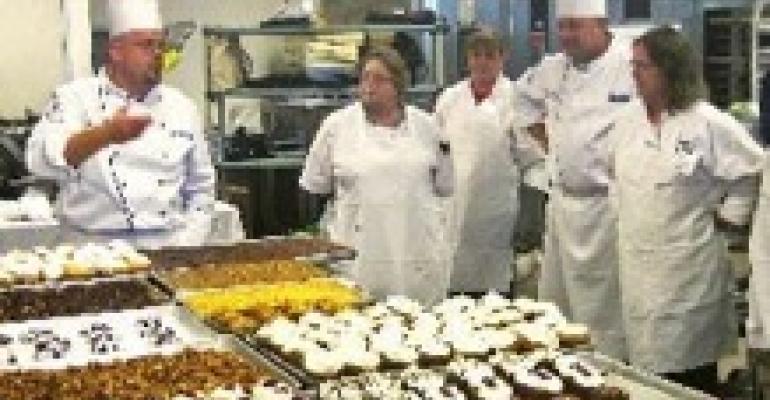 Tyson Focuses on latino Hunger
Tyson Foods is teaming up with the League of United Latin American Citizens (LULAC) and America's Second Harvest-The Nation's Food Bank Network to produce an in-depth study of the extent and root causes of hunger among Latinos. The company also pledged to donate one million pounds of food over a three-year period to America's Second Harvest foodbanks serving Latino and Hispanic populations.

To announce the collaboration and to kick-off the pledge, Tyson representatives made an initial donation of a truckload of more than 35,000 pounds of protein products to the Chicago Food Depository, whose member agencies serve Latino communities in the Chicago area.

"This was a great opportunity to network with peers from across the country," says Jim Warner, associate director at Ohio State University Medical Center. "The products were excellent, well thought out, and the speakers were relevant to all in attendance."

"Operator University brought forth an explosion of passion for food and being able to share with comrades and friends," added Mike Goodrich, executive chef at Oregon Health & Science University. "It was a foodie retreat of global proportions and perspectives."

J&J adds Veteran exec
J&J Snack Foods Corp. has named Vincent Melchiorre executive vice president and president of its Country Home Bakers unit. He will be responsible for sales and marketing of J&J's snack food businesses as well as overall management of Country Home Bakers. He will also assume the role of Chief Marketing Officer, replacing Michael Karaban, who had previously announced his retirement effective October 2007.

He previously spent over 20 years at The Campbell Soup Co., where he held the positions of vice president of marketing for Pepperidge Farm's Biscuit & Cookie Division and, before that, business director of the company's flagship Red & White Soup business.

The agreement, which also was made with Coke's largest bottler, includes Campbell's V8, V8 V-Fusion, V8 Splash and tomato juice in containers of 24 ounces or less, and will expand the products' reach from supermarkets and large retailers into c-stores, delis and vending machines.

"This transaction broadens Middleby's portfolio of products in the foodservice equipment industry and provides an entry into the heating and holding equipment segment, a segment that is estimated to have annualized revenues of $150 million," says Chairman/CEO Selim Bassoul.

"Carter Hoffmann is a well recognized brand and long-standing industry leader that has been serving the foodservice industry for 60 years with a broad product portfolio of heated cabinets, rethermalizing equipment, and food serving equipment."

The group says it chose Illinois schools because of the state's standing as the second-lowest in School Breakfast and Lunch Program participation among low-income students, according to a recent study by the Food Research & Action Center. The grant for the Massachusetts school was given to help them implement their first-ever Classroom Breakfast Program.

"This acquisition provides us access to private-label accounts, new products and additional manufacturing flexibility," he notes. "Marshall's strength in the private-label channel nicely complements our Sister Schubert's branded rolls. We remain interested in growing our specialty foods business through further good-fitting acquisitions such as Marshall Biscuit." Marshall's net sales are over $11 million annually.