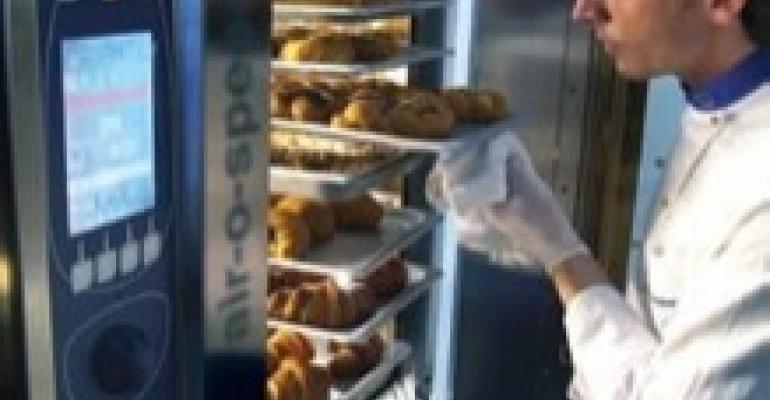 In the back of the house, a new generation of super-fast cookers is making the production of hot fresh foods more practical and extending where they can be served thanks to a greater application of ventless and hoodless systems. In other kitchen equipment areas, energy savings and food safety are key drivers of innovation. Ever more efficient coolers/freezers, warewashers, fryers, stoves and ovens are making commercial kitchens much more efficient energy users. Meanwhile, equipment with sophisticated temperature and seal integrity sensors make accidental contamination and spoilage less likely, and biocides embedded in unit construction materials helps control pathogens.

A particularly hot area right now is fast-cooking ovens that use various proprietary combinations of techniques (microwaves, steam, light, convection, etc.) simultaneously to cook food much faster than is possible with traditional methods. Many are practical for, and can be preprogrammed for, a much wider range of applications than previously, extending the ability of operators to offer freshly-prepared hot foods in satellite and even kiosk type settings quickly and cost-effectively.

Another cutting-edge technology in the cooking area is induction cooking, the process that uses magnetic waves to generate heat in iron and steel based cookware without burners or open flames. We're not talking simple countertop units here, either. Third generation induction cooking equipment generates heat directly in the cookware itself rather diffusing into the surroundings, conserving energy (induction cookers use electric power, not gas). That means less energy is needed to heat the food and there is less strain on hoods and air conditioning to regulate the temperature in the surrounding environment. Also, because the electrical energy is only used when needed, there is no wasteful preheating. With no open flames or burners, there is also less risk of accidents.

Currently, induction cooking's potential has only been scraped with its use in high-end environments, but as the technology becomes more widespread and prices begin to come down, its reach can be expected to seep into less exclusive applications (see sidebar on p. 44).

Cooking is not the only area where technological innovation is driving changes—or at least alternatives to traditional practices. At least one manufacturer is marketing a dishwashing system that uses "electrolyzed water" to disinfect and sanitize. As environmental concerns get ever-increasing play, such strategies might become more prominent in the future. Already, the notion of "green" equipment that uses less natural resources—primarily energy—and does less harm to the environment in terms of producing pollutants is a major driver of innovation, especially in high-energy-usage areas like refrigeration and cooking equipment.

In the front of the house, automation is reducing labor costs while still providing high-quality and customized choices through devices that let customers operate production machines without creating undue liability problems (this may be a potential future application for induction cookers).

It is also an area where the new generation of vending units might come into play. Already machines exist that deliver high-quality freshly-baked pizzas and fresh hot french fries not just in vending applications but in labor-sensitive environments like theater foodservice.

In a related area, a new generation of automated gourmet coffee dispensers are putting "baristas" into some high-end break rooms, as they are able to vend a wide choice of customized coffee drinks that rival what manned coffee shop chains can offer (and without tipping).