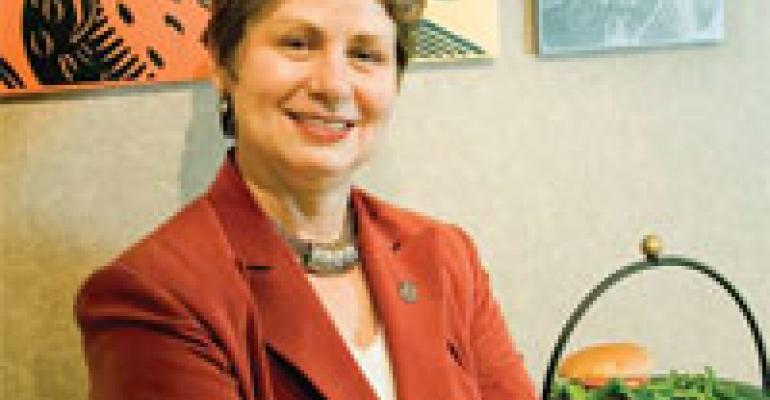 Mary Angela Miller never intended to apply for the directorship of Ohio State University Medical Center's nutrition services department. But fortunately for the institution, she was convinced to do so, despite a self-described lack of raw qualifications for the job back in 1990.

Smart move by OSUMC, which has enjoyed the benefit of having one of the onsite healthcare segment's top administrative talents heading its nutrition services operations for the past 18 years. And now it can also boast of having the 2008 IFMA Silver Plate Award winner in the Healthcare category in its organization.

Although Miller may not have had much direct foodservice-related management experience when she joined OSUMC, she did have exactly what the job required: managerial tenacity, strategic vision and a talent for taking calculated risks that has repeatedly led her to take her department into pioneering initiatives that have not only panned out operationally and fiscally, but earned OSUMC Nutrition Services a reputation for innovation.

Miller manages a multi-operational department under the Nutritional Services umbrella that includes patient and retail dining operations as well as a wellness center. With a combined budget in excess of $16 million, her department runs restaurants, cafés and mobile food units that service six hospitals on the sprawling OSUMC campus.

During her tenure, Miller grew clinical and retail sales from $2 million to $7.3 million in its latest fiscal year. Her technological and operational improvements not only increased volume and improved service but reduced labor needs by 90 FTEs, saving over a million dollars in total operating costs.

Miller is an Ohio native who grew up in Youngstown around “tremendously good food,” courtesy of her mother, who produced delicious meals both for her large family (Miller has nine siblings) and for a convent across the street, which helped put young Mary Angela through parochial school.

Nevertheless, Miller's interests were not so much in cooking as in science, and a nutrition class at Youngstown State University prompted a decision to major in dietetics.

Following her internship she joined the Cleveland Clinic as its first critical care dietitian, then migrated to Columbus to work for a private weight and wellness concern.

“I loved the small business opportunity but I wanted to get back into a large organization, and in Columbus that naturally pointed to Ohio State.”

At the time, OSUMC was starting a weight/wellness program much like the one Miller had overseen for three years, and needed a director. It seemed a perfect fit and great career move.

Unbeknown to her, however, OSUMC was in a bind as its longtime foodservice director had retired almost two years previously, leaving the department adrift. The job of filling that position fell to the same administrator who was to interview Miller for the weight and wellness director's position.

She wasn't laughing much when she got the job. “The thing that kept me up at night early on was that I knew I didn't have a lot of foodservice skills or background.As it turned out, these jobs are really not individually skilled jobs. They're jobs where leadership and — especially — human resource management abilities are key.”

Miller's first moves involved developing a dependable senior management team. The two associates she put in place in those first few years — Julie Jones as nutrition services director and Jim Warner as associate director in charge of culinary — are still with her, testimony to the soundness of the choices.

Meanwhile, her tackling of OSUMC's many operational challenges highlighted her talent for innovative thinking spiced with a dash of daring and leavened with a realistic assessment of broader organizational goals.

Those attributes were markedly on display when she agreed to participate in what is perhaps her department's signature technology-related foray: robotic carts that deliver patient trays to patient care units.

Her department's participation in the robot program helped ensure its success (since it represents at least half the volume the robots deliver), supported the broader organizational goal of leveraging cutting-edge technology and entailed some outside-the-box thinking (outside of OSUMC, such robots are almost exclusively used by warehouses, not foodservice operations).

Then there's the capper — rather than being satisfied with an admittedly “cool” move, Miller leveraged it into other efficiencies.

“Going to the robot carts for tray delivery not only eliminated the least-favorite task of most staffers — pushing carts — but enabled us to reassign people to tasks that service customers. It also let us take process from a decentralized system with about a dozen galleys and consolidate it all into one centralized retherm operation because we can now guarantee delivery in 12 minutes. And it also allowed us to reduce retherm staff.”

It wasn't just the robots. OSUMC under Miller was also an early adopter of e-CHOICE, a menuless patient meal order system, and a few months ago it debuted Seasons On-Line Express, a preorder option that extends the room service technology to staffers. They can now order meals online and pay through payroll deduction.

Miller has also been very active in the industry, and currently is finishing out her term as president of the National Society for Healthcare Foodservice Management (HFM). She has been one of HFM's most active members in pushing to fill the talent pipeline and making onsite — especially healthcare — foodservice an industry of choice for young culinarians and hospitality management graduates.