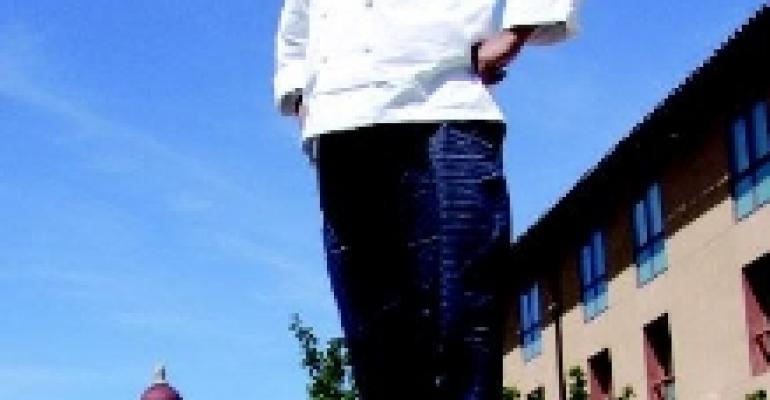 Master of Multiple Arts Carves Quite a Career

In addition to being a very talented chef, Raul LaCara is also an adept ice carver, which is the skill that helped the Philippine native gain entry into foodservice.

"I didn't really dream about being a chef," he says. "I was studying fine arts and architecture and working in hotels to pay for school."

LaCara first got interested in both ice carving and cooking while working as a hotel waiter in the Philippine capital of Manila. Eventually, he got a job with Exploration Cruise Lines, an Oslo, Norway-based concern plying the waters around Europe.

He honed his culinary skills while working his way around much of the world, finally ending up at Stanford University in Palo Alto, CA. Today he is general manager and executive chef at the Schwab Residential Center, an upscale extended stay facility housing students participating in Stanford's executive programs.

From cruise ships, it was on to hotels, first in Europe and then the United States. Eventually, he wound up in the Bay Area, where he came to the attention of Stanford Dining Services. The school hired him in 1999 as executive services chef for the Schwab Center, and later as executive chef for the Manzanita and Banner undergraduate residential dining operations. Now he's back at Schwab.

Splitting his attention between two different arts doesn't seem to have compromised LaCara's mastery of either. He has won some rather prestigious ice carving awards, including a second place finish at the National Wild Game Competition in Wisconsin in 1994.

On the culinary side, LaCara won the dining department's intra-departmental chef challenge in 2003 and then placed first in the NACUFS 2004 Culinary Challenge, where he competed against premier chefs from other universities.

Why does a young guy from the Philippines sign on with a cruise line in Norway?
"Cruise lines were booming at that point and they gave me a chance to expand my career. It was great. Every day you see different places, and you're getting paid for it while at the same time you're also learning."

And then, from Europe you went to the Middle East?
"I got a job in the Sultanate of Oman where I learned not only about Middle Eastern cuisine but also Indian and Pakistani cooking because a lot of the labor in the oil-rich countries in the Middle East come from there."

How did you get to the United States?
"After I left Oman I worked in cruise lines again, and that's where I met my wife. She's American, so after we got married I got a chance to come here. I started at

Miami's Intercontinental Hotel, where I learned about Cuban and Caribbean cuisine. Then we moved to California because my wife is from San Francisco and she missed it."

What's your favorite cuisine tradition?
"Southeast Asian, and I think Singapore has the best."

Do you have a specialty?
"I don't know. Here in California so many crazy things happen. I like traditionaltechniques. Bring back braising, I say. No one braises anymore. I love braising traditional lamb shanks with spices and herbs..."

What kinds of spices and herbs?
"On lamb shanks I have this recipe where I use melted tomato and then some sweet red wine and then just braise it down with mirepoix and let it cook by itself in its own natural juice. Then, once the flavor comes out, I put some garbanzo beans with it. And that's it."

Tell me about the ice carving...
"Ice carving is a very intimidating job because if you break the block, it's all over for you. But I love it. I did some sculpting in school, so I'm comfortable with it. Unfortunately, these days very few customers order it because it's so expensive."

Do you still get to do some carving, though?
"Once in a while here at Schwab."

How long does one typically take?
"It varies, but for example, the Stanford logo takes me about 45 minutes."

What is the longest you've ever worked on a carving?
"I once did a Kremlin for a Russian convention. That took me about four days to build..."

I can see how it took you four days!
"The hard part is that you have to carve the ice block by block and then assemble it on the day of the event. You can't put it together beforehand because there isn't enough room in the freezer. So you have to guess from block to block."

Have you tried teaching your kids yet?
"They're too young to handle chain saws."

Chain saws? I thought you used a chisel.
"In the Philippines when I started I used only a chisel. Today, I don't know how I did that. Now, all I need is one chain saw and I can carve anything."