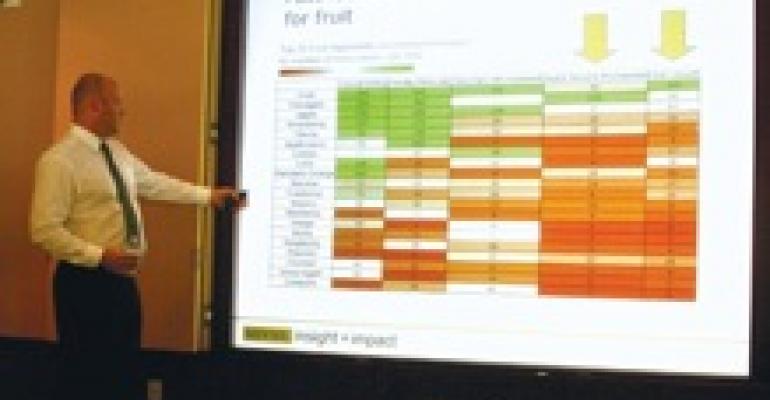 Breakfast, dessert and other foodservice meal and dayparts are under-penetrated when their menus are evaluated in the context of consumer interest in seeing more fruit options in their menu choices, according to new research conducted by the Mintel International Group.

According to David Morris, a research analyst for Mintel, quickservice style operations and those with breakfast tra~ c in particular have an opportunity to menu fruit and fruit ingredients more e˚ectively. One benefit is that it improves overall customer perceptions of the healthfulness of their menus; other advantages include making those meals more appealing to women, parents looking to purchase meals for children and consumers who want to feel that they are "doing the right thing" in their dining habits.

Customization Opportunities
Service stations that let a fruit side dish be customized based on a diner's made-to-order choices "is as close to a home run as a survey can provide," Morris notes.

"More than three in four respondents say they would be interested in such a side dish." Women in particular are interested in customized fruit dishes, he said.

For those in a full service or catered meal situation, Morris said the research suggested consumers also would welcome small fruit dishes as "palate cleansers" between courses or a dessert sweetened with fruit or fruit juice instead of sugar.

Demographic Differences
In other observations, Morris noted that Hispanic consumers are significantly frequent consumers of 13 of the 18 fruits identified in the survey. "The five fruits in which there was no significant difference were all mainstream fruits: apples, pineapples, peaches, bananas and mixed fruit."

Summaries of the full study are available from Dole Packaged Foods, which originally commissioned the Mintel research. To obtain a copy, go to www.dolefoodservice.com and look under "brochures and sellsheets."