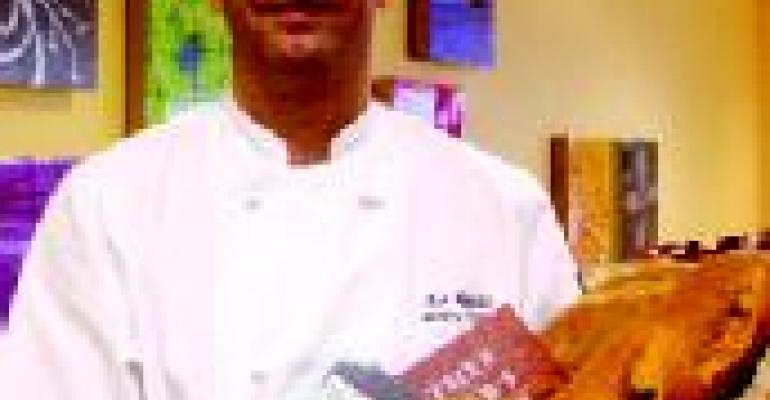 From the Mountain to the Bay

How does someone go from cooking for military personnel manning a radar station atop a mountain in the South Atlantic to cooking for the sophisticated palettes of Bay Area techies? Ask Stephen Higgs. He's done it.

Higgs is currently chef manager for the Bon Appetit Management Co. operation at Symantec Corp.'s world headquarters in Cupertino, CA, near San Francisco. But in a previous life, he was manning the field kitchen on that mountaintop in the Falkland Islands for the British Army shortly after its 1982 war with Argentina over possession of the Falklands.

Higgs joined the Royal Air Force as a chef at 18, after graduating from catering college. In addition to the radar station gig, he was also stationed at an air base in the Falklands, part of a catering team that supplied in-flight meals for personnel flying through the base on their way to or from the South Atlantic.

After leaving the military he migrated to the United States in the late 90s, attending the California Culinary Academy in San Francisco and then joining Bon Appetit. He subsequently served as catering manager at Pacific Bell Park in San Francisco, and then did a stint at Santa Clara University before coming to Symantec in 1998.

At Symantec he is responsible for the corporate cafè that provides breakfast and lunch to an in-house population that swelled from around 650 to more than a thousand following a recent acquisition. It also serves visitors and Symantec employees from around the globe who come to the world headquarters.

What were the challenges of cooking in the Falklands?
It was pretty crazy. We were about 1800 meters up the mountain on a radar site and there were 37 people there. Basically we were pretty much fenced off at a quarter of a mile square area because it was physically dangerous to go outside. It was always very windy. They were mostly engineers, radar guys.

What was the food like?
It was basic. But because it was a very captive audience you found out pretty quickly if there was something people didn't like. After all, you lived and slept with them. Most of the product came in from the UK on boats. One thing we did get a lot of was fresh vegetables...

You had fresh produce?
We had fresh produce twice a week from the UK, so that wasn't so bad. It was pretty cool because you had to get inventive and try and mix it up a little bit for the guys.

Did they prefer what we now call 'comfort foods'?
Very much, because we had a lot of army kids who were going out patrolling or just doing exercises. So once you've got some guy who just walked 15 miles over half the mountain, he just wanted something nice and hot and plenty of it.

What was the kitchen like?
It was a fully functioning kitchen. It was actually made from iso-container, from the containers you have on the backs of trucks. They were welded together.

How long were you there?
I had two tours, each lasting four months. After I left the radar site I went to Berlin, then to the UK before returning to the Falklands to do in-flight catering. That was pretty interesting, since we basically did all the food for every military aircraft coming through. There were Hercules C-130s, which used to go around checking on the fishing fleets, as well as the helicopters that moved troops and equipment from place to place. Another kitchen fed the air crews when they were on the ground. We were responsible for packing the in-flight meals, not just for asir crews but for the troops that came over from the UK twice a week on the TriStar aircraft. Each of those carried about 250 people.

How did you get to the US?
My girlfriend—later fiance—worked for Oracle, and she settled in Washington State. I decided to leave the military and follow her here, but I could only get an educational visa, so I took a busman's holiday and went to the culinary academy in San Francisco. I worked as a culinary intern at the school, doing preliminary prep for chefs who were teaching there. I not only got to work with people the caliber of Gary Danko, Madeleine Kamman and Barbara Tropp, but got to spend time alone with them as they prepared for the classes. I asked a lot of questions and was like a sponge soaking up everything they said.

How did you get to Bon Appetit?
My student visa had run out and I had to go back to the UK. Just before I left I went to Bon Appetit and asked for a sponsorship. My interview was literally two days before I left. I was hired and got my visa so I could return. My first position was as catering chef at Pac Bell Park in San Francisco for the Giants.

Did you actually understand baseball?
No, and that was a problem at the beginning. Someone would say, 'Take this to first base,' and I'd say, 'Okay, but where the heck's first base?' It took me a couple months to learn all the places in the ballpark. But it was a wonderful time because it was the season Barry Bonds was going for the home run record.