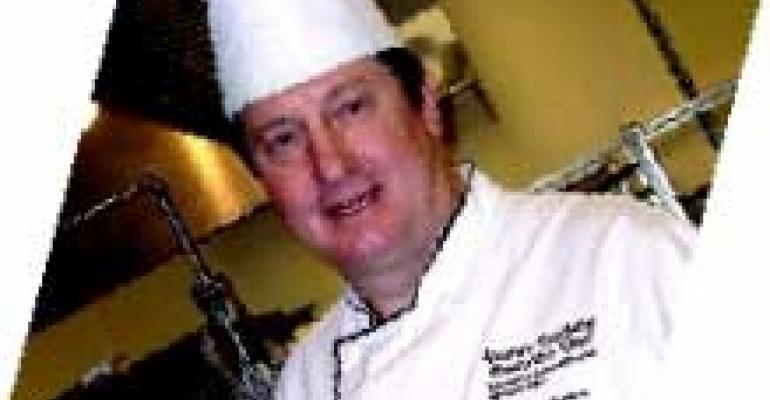 George Carlberg has seen it all, or at least a lot of it. The foodservice world, that is. Carlberg, who is currently executive chef at Littleton (CO) Adventist Hospital, has seen more sides of this industry than most.

From a start in the hotel dining business as a young apprentice still in his teens, he migrated to the restaurant sector, working in turn at a high volume white-tablecloth establishment, and then a popular sports bar before opening and operating his own place (Weldon's) for several years. Following that, he spent eight years at Denver's oldest restaurant, the Buckhorn Exchange (founded by one of Buffalo Bill's scouts, it holds Colorado's State Liquor License #1).

Later, he migrated into a grab-bag of foodservicerelated pursuits outside the commercial restaurant sector—cooking for a cook-chill style central kitchen serving skiing areas, serving as general manager for a meat company supplying restaurants and institutions with customcut proteins, and then overseeing banquets for thousands as executive sous chef at the Colorado Convention Center. He joined Littleton Adventist last year.

At the hospital, Carlberg oversees production and writes the patient, catering and retail foodservice menus. Littleton Adventist, which uses a room service style model for its patient meal service, averages a little over a hundred inpatients at a time. The facility is undergoing an expansion that will expand to 230 beds next year.

Were you interested in cooking as a kid?
Actually, I kind of fell into it. At first, it was just an opportunity to make money, but the more I worked at it, the more I realized it was something I was good at. And of course, with more responsibility came more money, so it was really the American dream. I started at 17 as an apprentice in a local hotel kitchen and stayed for six years before moving on. I never went to culinary school.

What was your own place like?
We had an Irish pub theme with a lot of dark wood because those types of places were my favorites as a customer. The house specialty was pancooked to order. It was quite but we closed after less than three of a dispute over the lease.

You then joined Buckhorn Exchange. That must have been a gas!
It was a very enjoyable time. I was there for eight years, including the place's one hundreth anniversary, and I got to cook with a lot of unusual game meats— venison, pheasant, buffalo—as well as prime beef. In cooking them, I tried to use ingredients thast would have been used when Buffalo Bill was around— dried fruit, wines, berries.

Why did you leave?

The place was a time capsule, with over 500 game trophies dating back to the Buffalo Bill era all over the walls. That sense of history got limiting because the menu couldn't really change. When people came in, they expected to see the same things as the last time they were there, even if it was decades ago.

You eventually ended up at the convention center. What was that like?
They had just completed a new 32,000-sq.ft. kitchen, and we were regularly catering parties of 3,800 to 5,000 people. The two most memorable were the NBA All-Star Game after-game party with all the celebrities, and a Harley Davidson dealers association convention. It was a great time, but I ended up staying for only about a year. It was really hectic. You'd come in a five or six in the morning and never know when you might be able to leave.

How did you find out about the hospital position?
I saw it posted on a website. I thought about it, talked to some friends who were in healthcare and met with the nutrition services manager here. The more we talked about it the more it seemed like a good fit— much better hours, only seven minutes from my home and an opportunity to really work on upgrading the menu so that it rivals the quality of any sit-down restaurant.

How much did you know about hospital foodservice?
Not a lot, but the fact that Littleton had room service made it similar to the shortorder model I was familiar with than a traditional trayline model would have been. It made the transition easier, but learning to cope with dietary restrictions was a challenge. I'd want to implement some changes in the menu and then find out it exceeded sodium or fat requirements, so I had to learn to work around those factors.

Of course, you're a lot freer in the retail and catering ends. What are you doing there?
We're doing a really upscale grab-and-go in all three retail locations, with selections like Egg Salad With Fresh Watercress, Roast Chicken With Cream Sauce And Roasted Red Peppers and Roast Beef With Brie And Red Onions.

What are you famous for cooking at home?
Every year for Christmas I make an herbcrusted prime rib with fresh mashed potatoes and fresh vegetables. One year I did pork loin instead and there was almost a riot.