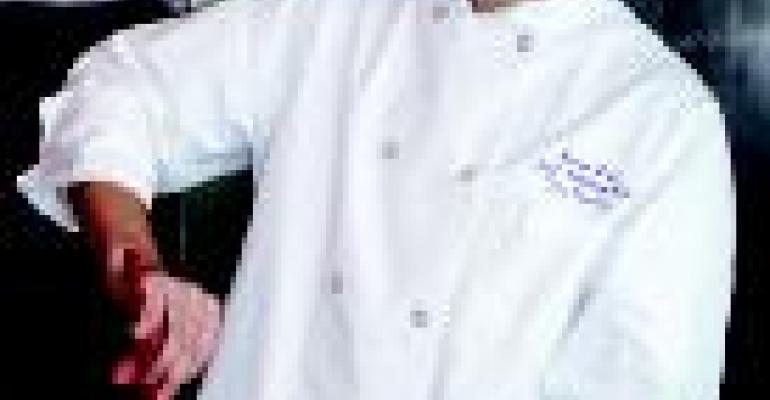 Nurturing the Next Generation

Forty aspiring chefs and cooks from the Seacoast School of Technology, Exeter, NH, got some unbeatable real-life experience in frontline foodservice this past December. The students, participants in a high school culinary program, worked side by side with the dining services staff at the University of New Hampshire to prepare meals for the university dining halls.

The purpose of the interaction was "to give them a 'live' experience that they can use later when they are seeking employment in the foodservice industry," says UNH Executive Director of Dining Services David May.

"The experience also exposed these young future culinarians to our part of the industry, one that remains much less publicized than the restaurant and hotel end. Perhaps this will prompt some of them to consider careers in our industry in the future."

Indeed, although his schooling predates this program, one graduate of the Seacoast School already works full time in the UNH Dining Services operation. With this program, May says he hopes more will consider making the same career choice.

Different students assisted in different areas of the kitchen and servery. Some helped prepare food while others trayed it up. The goal, says May, was to provide the young culinarians with not only real-world experience but also to demonstrate the wide array of responsibilities that a major noncommercial foodservice operation such as UNH Dining Services encompasses.

The germ of the idea was provided by Jim Collins, a former lead manager with UNH Dining who now works for the Seacoast School. Collins approached May last year about working together to provide his students with some real-world experience. May says he was immediately taken by the notion. The onsite community has recently been making a concerted effort to promote itself to the next generation and May says he this initiative was a part of that effort.

The Seacoast students didn't just get a free ride into the program. In fact, the educational component began even before they were accepted for participation. To get into the program, each candidate had to submit a resume and cover letter articulating their interest in a particular area of the dining program. To know about those different job options, they had to research the various functions that a college dining program supports. Their cover letters then had to reflect both a working knowledge of the position they were interested in, as well as make a convincing argument about why they should be included. (Collins worked with them on this stage to sharpen their proposals.)

Not that Seacoast students weren't already somewhat familiar with a foodservice environment. SST Culinary Arts is an intensive two-year, five-day-a-week program in which students attain and sharpen the skills they will need to get into college programs, or straight into the working world or the military.

Throughout their tenure, they are constantly evaluated against a rigorous set of state standards in culinary arts and foodservice management.

They also get live experience from participating in running both a restaurant open to the public, as well as a catering business. Indeed, this past fall, SST culinary students catered a wedding for 75 people in Newmarket, NH, a "game dinner" for 70, a dessert banquet for 500 and many other meals. From August through December, they served nearly 3,000 catered meals.

Meanwhile, the student restaurant menus upscale fare made entirely from scratch. The establishment is open weekdays for lunch and periodically for special dinners that always sell out.

In these dinners, the students take their guests on domestic regional and a international culinary tours. The weekly menu for the restaurant can be found at www.seacoasttech.com/culinaryarts/julias/html.

The UNH event went so well that May and Collins are now planning on a repeat session of the program, tentatively scheduled for this spring.