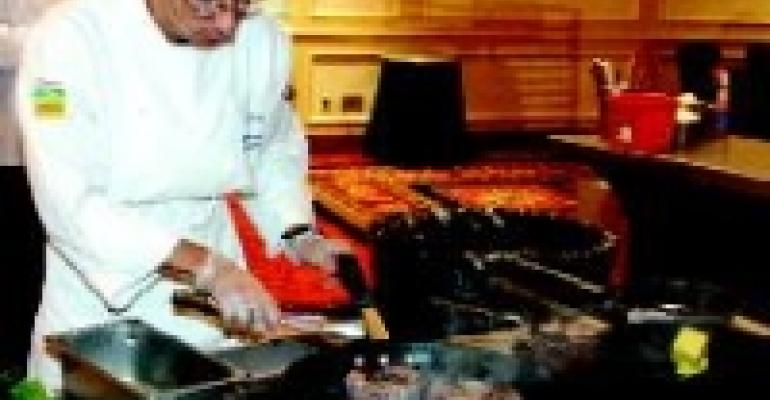 From Patagonia to Piscataway

When Sebastian Nieto won first place honors at the recent 5th Annual NACUFS Culinary Challenge, his winning lamb entree utilized quince as a primary ingredient. Afterwards, he noted that quince is a traditional ingredient in his native Argentina, and its use was meant as a "tribute to my heritage."

Indeed, it has been an almost 20-year sojurn for Nieto since he began his professional culinary career in 1986 while attending the Hotel & Restaurant Association Culinary School in Mar del Plata, Argentina. His travels have taken him from hotels and restaurants in his native country through world-class culinary hotbeds like France and Italy and finally to the United States in 1993.

In this country he has worked at the Gotham Bar 7 Grill as well as hotels like the Hilton in East Brunswick, NJ. He joined the culinary staff at Rutgers University in 2003 and today serves as one of the school's four catering managers. In that capacity he shares responsibility for catering some 5,000 functions annually across Rutgers's five campuses in the New Brunswick/Piscataway area. These range from simple coffee breaks for half a dozen to elaborate Rutgers Foundation dinners for a thousand, and feeding visiting dignitaries to catering tailgating events that preceed Rutgers home football games (a soccer fan, Nieto is only starting to learn the intricacies of American football).

How did you develop an interest in cooking? "My grandmother was a great cook and I learned from her, just how to feed a family. When I started college, I was intending to become a lawyer. Meanwhile, I continued to cook for family gatherings and small parties. When my sister graduated, I cooked for a larger party of 20 to 30 people and realized this is what I loved to do. A family friend suggested I go to culinary school. Of course, 20 years ago in South America, this was not exactly the most popular thing to do, but I've never regretted it."

How has Argentina influenced your career? "Early on I worked in some smaller hotels in Argentina and I really enjoyed it because I got to deal with customers on a one-to-one basis. When you're working in a 12-15-room hotel, guests will comes down to your kitchen and ask for what they want. The Patagonia region where I worked is a big hunting and fishing area, so people would come to me with fresh salmon, trout or venison they caught and ask me to prepare it. You have no choice but to be creative in those kinds of situations in order to meet customer expectations."

How did you wind up in New Jersey? "My wife had friends here, so after she graduated we visited and I met one of her friends who was in the restaurant business and offered me a job as a cook in a very busy place in North Bergen. Because I had experience with back-of-the-house operations, sanitation and buying I was later able to land a job with the Gotham Bar & Grill in New York City as an executive steward. I was with Gotham for about four years and even though it got me away from the kitchen and cooking it was a great learning experience. I was able to learn a lot from Alfred Portale [Gotham's executive chef ], especially about American food, since my training had primarily been in classic European cuisine. Then I spent a couple years with the Hilton, ending up as banquet manager."

How did Rutgers happen? "I knew some people who worked there and heard good things about working in a college environment. Then, I saw a posting on the web for a job there, interviewed and was hired."

What were some of the more memorable functions you've had to cater? "I don't know if any stand out. I love the fact that I get to meet peope from so many different places and walks of life. One day I could be serving a coffee break to Nobel prize winners visiting the university, and then the next I'm feeding football recruits who come from all over the country. I've cooked for the president of Argentina as well as the president of Costa Rica when he was doing his international tour after winning the Nobel Peace Prize. In a few weeks, we'll have the Dalai Lama coming through [the Dalai Lama gave an address at Rutgers Stadium on Sept. 25-ed.]."

What'll you cook for him? "The menu's still being developed but I know he's vegetarian so we'll have to stay away from meat."

I would guess football Saturdays are pretty busy. "Yes, we not only cater the press box and private boxes, including the president's box, but also corporate tents, the alumni association and donor parties."

Do you have a cuisine specialty? Your training seems to be Classical European. "It is, but I'm also very influenced by Argentinian cuisine, which is very much a melting pot of different traditions—Italian, Spanish and so forth. I like to mix things up. For example, for the NACUFS competition I used things I grew up with—quince, Swiss chard—and combined it with a more traditional presentation."