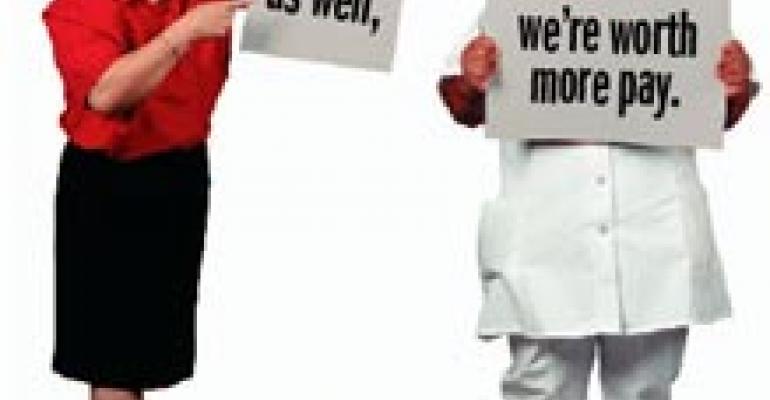 Top prize in the employee retention sweepstakes has unof cially been awarded to a couple of software company executives who are handing out keys to new BMW automobiles to employees who stick around for more than a year.

One of the executives told The New York Times in June that the $270,000 cost of the rst installment of the BMW incentive (annual lease on each $31,000 car runs about $7,000 a year and insurance another $2,000) compared very favorably with the approximately $900,000 he had spent on recruitment and training in the previous 18 months.

It s only fair that the ashiest new retention strategy comes from the software industry, the most competitive, high-paying, job-hopping market out there. But what is happening in high-tech industries is being replicated although on a smaller scale, at a slower pace throughout the U.S. in all industries and at all levels.

More of us are changing jobs more often. A 1997 poll reported that 53% of all working people expected to quit their jobs within ve years. A 1998 survey reported that on average, employees were changing jobs every three to four years. In a national survey released this year by Kepner-Tregoe, a Princeton, New Jersey-based international management consulting rm, 60% of the 1,290 survey respondents admitted they themselves think about leaving their job one to two times a year. And in the U.S. as a whole, annual turnover is estimated at 10 to 15%.

Foodservice is and has always been at the heavy end of the turnover scale, with rates of 100% and higher common among entry-level foodservice jobs. Onsite foodservice directors, while not yet lining up in car dealerships, are exploring a variety of strategies in their efforts to motivate and retain employ-ees at all levels. They ve got good reason.

Successful retention of employees makes good business sense; out-of-control turnover can have a devastating impact on any operation. The nancial cost of losing an employee is just the beginning. There s the cost of termination, cost of hiring and cost of the new hire. The Kepner-Tregoe study, entitled Avoiding the Brain Drain, put the replacement cost of a fast food chain store manager at $21,931 and the replacement cost of a kitchen or counter person at $1,520.

Consider, for a moment, the line item costs when an employee leaves:

You see a wide range of numbers when you talk to people about what turnover is costing them, says Michael Carter,, vice president of The Hay Group, an international human resources management consulting firm.

But if you re a foodservice operator with 100% turnover, your costs are high and you ought to be doing more to retain people. The guy who bought his employees BMWs obviously decided that the cost was worth it if it kept his employees on the job.

Foodservice directors have been forced to be creative when it comes to retaining employees because so many of the parameters of their departments jobs are beyond their control, particularly with regard to pay and bene ts. But that isn t necessarily a big dis-advantage. Increasing pay levels, the knee-jerk management response to increased turnover in the past, is not a magic bullet.

In fact, when Kepner-Tregoe asked work-ers and managers what they believed were the three most common reasons high-performing employees had left their organizations, 56% of the respondents did not select money as one of the three. Instead they selected limited opportunity for advancement (33%), not feeling valued (26%), and con ict with supervisor/manager (16%).

An especially startling nding was that while many surveyed managers and workers report that their companies have tried all 10 of the retention strategies listed in the survey, a similar number said these strategies have proven ineffective (see Perks chart).

Companies in the foodservice industry, because of their smaller pro t margins, have had to be very innovative in coming up with ways to retain their employees, says The Hay Group's Carter.

Stock and retirement plans are two areas that are getting a lot of attention because everyone is worried about saving more for retirement, but many work-ers have no employer-provided retirement bene ts, he notes,, adding that the effectiveness of retention strategies often varies with the age of the employees.

Generation X-ers are different from baby boomers, he says.. The X-ers are looking to develop their careers, make money, and enjoy their free time. They ask, Am I learning? Am I growing?

Baby boomers are looking for a balance between their work and personal lives. They re more interested in family-friendly policies and exible bene t packages. There are no hard and fast rules on what works and what doesn t. It comes down to what works in your operation with your employees.

To help you consider all your options, we offer this sampling of retention strategies that have proven successful for several onsite foodservice directors.

Empowerment
When Dan Zellner arrived at Pendleton Memorial Methodist Hospital, in New Orleans, as director of food and nutrition services for Morrison Healthcare Foodservices, in 1995, turnover was running up to 70% and production was plagued with problems caused by absenteeism. Today, turnover is running below 20% and Zellner gives credit to an empower-ment/motivational program which he dubbed STAR (Start the Astonishing Recognition).

The program focuses on recognizing positive job actions and contributions by employees. All employees at all job levels have the opportunity to accumulate points as they move through a succession of six program levels. In its rst three-year pilot, three of the 60 foodservice employees achieved the top level, while 92 percent completed at least one level. Each new level carries an increase in base pay and a variety of honors and gifts.

The positive actions include submitting ideas that generate revenue or reduce costs, conducting in-service sessions for other employees and working for fellow employees who call in sick.

I can count on one hand the number of employees who don t want summer work, she says. We can t do anything about the academic calendar. But we can be creative about searching out opportunities for summer work.

What Hennessey has done is forge part-nerships with other campus departments, including conference services, buildings and grounds, and a greenhouse/nursery.

The shifts, as well as the work, itself usually are very different in the summer jobs, she says, but the employees seem to like the break from dining services. Some of them enjoy working outside in the summer and some of them like the early shift they get in housekeeping.

We just negotiated a new-four year contract in which we spent a lot of time looking at how bene ts are affected when employees don't work year round, says Hennessey..

We ve tried to even out peaks and valleys by changing the way health bene ts are calculated for employees. The employee contribution used to be calculated on a week-to-week basis, so employees would have to pay the full cost of bene ts for weeks they were not working. Now their contributions are based on the average number of hours worked over a 52-week year.

Work Environment
When you get to the heart of why we have employees who have been here for 38 years, they stay because they like what we have created here, says Pat Higgins, director of dining services at the University of Maryland, in College Park. They like the people they work with, the university setting with the red brick and the Georgian architecture, and the feeling we have here of family.

There is a camaraderie and a pride in what we do, and that has increased as we have become more involved in activities of the university at large.

That involvement has us working with people throughout the school, and it has changed our reputation so there is a widespread recognition that there s more to us than three meals a day.

An information technology employee who joined Higgins staff as an undergraduate,, for example, has since received his master s degree and remains on her staff.

For him the attraction is, I think, the challenge and variety of the job, she says..

He's got three professional staff working for him now and the areas they get involved in are always changing.

Higgins says an annual three-day staff retreat at an off-site conference center also contributes to team spirit and produces a mindboggling number of ideas and suggestions for improvements and changes.