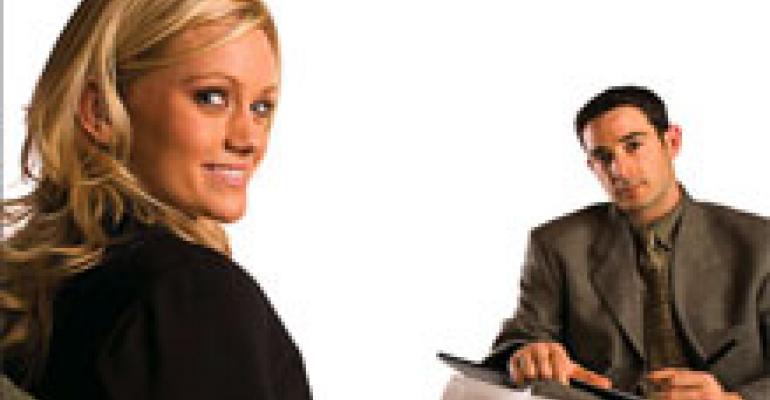 “In over 20 years’ experience in this industry, recruiting is the one area I’ve found that’s not cyclical. It’s been a challenge throughout,” states Bryn Mawr College’s Director of Dining Services Bernie Chung-Templeton.

Unfortunately, according to the experts, it looks like the situation is just going to get worse. As Clive Solomon, president and founder of Association of Hospitality Recruiting Executives (AHRE) and principal of his own Recipe for Success recruiting firm in Los Angeles and Ft. Lauderdale, says: “The workforce is shrinking, and the industry won’t be able to keep up with openings. There’s a great deal of competition for our workforce from industries outside of foodservice, such as retail, call centers and other hospitality services.”

What’s a foodservice director to do? Everyone knows to post positions on professional organization and general job web sites, place ads in newspapers, or even solicit the help of head hunter services, if the job warrants. But there are some other, smaller – and often, pretty low-tech – ways onsite operators have found that work, too. As Chung-Templeton says, “It takes a multi-pronged approach.”

Proactive vs. Reactive
One place to start is with an attitude adjustment about the subject. “Recruiting is all about building relationships,” states David Rose, vice president of Recruiting at Yellow Dog Recruiting Co., based in Minneapolis and Ft. Lauderdale. “The key to it is being proactive, not reactive, to be in a position where you don’t have to suddenly scramble when you have a spot to fill or, as a contract company, have a new account to staff.”

A former senior recruitment manager for Compass Group, Rose suggests to clients that, as a rule of thumb, they try to introduce themselves to three new people every day. “Get to know people, and continue to speak with them. Build the relationships before the need arises.”

Tom Long, executive chef at the Sodexhorun Holy Spirit Hospital in Camp Hill, PA, does just that. While it’s always a logical move to notify local vocational schools with culinary programs when a kitchen position opens up, Long takes it a step beyond.

“I’ve found it’s helpful to really get involved with the school’s program. Go in and do a guest chef stint; teach a skill; really develop a rapport with the instructor,” he advises.

Rather than just reading a job posting, this approach puts a face on the job situation for prospective employees. “Kids can see you in action during a guest chef appearance, and say, ‘I want to work for him,’” Long notes. “It’s been a good way to find entry level culinary workers. And there’s nothing better than getting someone in who is really interested in the job.”

About a year ago, Director of Nutrition Services Dexter Hancock, MHA, RD, LD, started working with the local community college in Tuscaloosa, AL., in the hopes of training some culinary talent as possible future prospects for his department at DCH Health System.

“We noticed the hospital had a problem getting phlebotomists a while ago, so they just started a school to train them. We decided we could do the same thing,” he says.

Instructors at Shelton State Community College were delighted with the arrangement, Hancock says. “Their culinary program was maybe four or five years old, so they were very interested in building it further.”

The pact works this way: DCH’s Executive Chef Gary Lane and other department cooks go to the college to conduct demonstrations and some training; then, participating students (about two to three at a time) travel over to the hospital and work in paid positions several hours a week, while receiving additional training.

Although the ultimate goal is to lure some students into full time positions at DCH after graduating, they are not obligated to do so at this point. However, Hancock says he’s looking into establishing some scholarships that would then require students who accept the funds to agree to work at DCH for a certain amount of time after receiving their A.A. degrees.

Your Best Advertisement
It’s a cliché that word-of-mouth publicity is the best kind you can get. But a number of operators have found that truly harnessing that idea can pay off. When applications for part time foodservice positions dropped over the last 18 months at Robert Wood Johnson University Hospital in New Brunswick, NJ, Director of Food and Nutrition Tony Almeida decided to enlist current staff members to help out. Taking conscious and deliberate efforts to consistently ask and remind staff to keep their eyes open for prospective hires, he’s found the results astonishing.

“You’d be surprised how many of your own employees do know people that need work,” he says. “About 90 percent of our current utility team – pot washers and tray deliverers – have come from referrals.”

Although Almeida hasn’t had to implement one, often a monetary incentive program helps with referrals. The food and nutrition services department at Fairfax County Public Schools in Virginia offers recruitment bonuses of $200 for employees who bring aboard a new worker – part time or full – who stays more than 90 days.

“There are some employees who’ll recruit five, six, seven people a year. It adds up to be quite a bonus,” says Food and Nutrition Services Coordinator Amy Hubal, SNS. “Word-of-mouth is one of our best ways of finding new employees.”

At Bryn Mawr, Chung-Templeton awards a $500 referral bonus after a new full time employee has clocked in 90 days. “The current workers know the culture and are invested in helping out any new employee they bring in,” she explains. “Really working this system is cheaper than placing a $2,000, four-line ad in the Sunday paper, and it’s more effective, too. Since we’ve been pushing the idea of word-of-mouth referrals to our employees, we’ve been selling positions faster and having people stay longer.”

In a slight twist on the concept, Chung- Templeton also keeps up personnel-oriented dialogues with industry colleagues at other colleges and universities in the area.

“I know it seems counter-intuitive to ask another operation for their ‘rejects,’ but it’s really not the case,” she explains. “Just because someone might not be right for one college doesn’t mean they might not be right for another. Sometimes, it’s just a matter of timing – you might come across a good applicant and think, ‘If only I had a position for this person!’ Well, another operation nearby just might. We’ve actually filled quite a few positions very successfully that way.”

During the academic year, student part-timers comprise about 40 percent of Chung-Templeton’s workforce. But in the summer, to keep abreast of conferences and other programs conducted on campus, she had difficulty filling spots until she took to emailing staff and faculty to invite their high school and college-aged children to apply for summer jobs with her department. “It works out well for us. They get to ride to work with mom or dad, so they show up on time.”

Another way Chung-Templeton lures prospective employees is to offer temporary workers a higher rate per hour than normal, but no benefits. “This gives them a chance to try out the position. We’ve had a couple of miscellaneous temporary employees go this route and then switch over to full time.”

Overlooked Applicant Pools?
At SAS, the business intelligence software company in Cary, NC, Foodservice Manager Julie Stewart has, for a decade now, staffed the entire dishrooms in both of her cafés with autistic employees she has met through the University of North Carolina’s TEACCH division (Treatment and Education of Autistic and Related Communications-handicapped Children).

“We had begun doing job trials with students with developmental disabilities, and were introduced to the TEACCH program when we first became interested in hiring a student supported by the organization,” she says.

Currently, Stewart employs seven full time people – all adults now – with backing from the program, which supplies two trained, onsite job coaches. One coach in each location daily supervises and encourages the workers.

“Before we found these employees, we were constantly trying to fill those dishroom positions,” Stewart says. “Our autistic employees need routine and structure, so the dishroom duties are a good fit for them. They’re also very dependable, and they achieve satisfaction from their jobs.”

In fact, in the 10 years since she began her affiliation with TEACCH, Stewart has lost only one employee from the program, who just happened to move out of the area. “The rest have been here the whole time, and they’re thrilled to come to work every day.”

Before learning about TEACCH, Stewart had already begun working with special education students from Wake County high schools in an informal arrangement, bringing in students a few hours a week to learn job skills in exchange for their help in the kitchens.

But in recent years, she organized the effort into a full program, also pulling in adult students from the Compensatory Education Program at nearby Wake Technical Community College. Students now work through four modules of training, from customer service and cleanup to salad, entree, then bakery preparation. About 20 students participate in the unpaid internship program per year, working about four hours a day, two to three days a week.

“They progress at their own pace, some getting through just one module, and others making it all the way,” Stewart explains. “It has proved invaluable for the students to work in an actual business environment rather than a simulated setting in the classroom. This way, they learn job skills firsthand, and experience what it’s like to be in a workplace.”

Culture and Climate
Corporate culture can also help recruit and retain employees. Effecting change on that end is no easy task, but a look into how other companies and organizations operate could help get the ball rolling.

As AHRE’s Solomon notes, the companies always cited as best to work for “have made sure to establish a balance in work and life. Companies that are really listening to their employees and asking them what they want are inspiring passion that will keep them in their jobs - things like sabbaticals, and different days off that work better for particular employees.”

Of course, an excellent benefits package can work wonders for recruiting, if your organization is lucky enough to have one. At Fairfax County Schools, Hubal notes that complete benefits cover even part time workers starting at three hours a day, five days a week. It’s such a strong draw that out of 1,100 hourly positions, she’ll have maybe 10 vacancies to fill at the beginning of each school year. With 11 paid holidays, full health coverage, ten sick days, a supplied uniform, retirement benefits and one free meal per day, it’s a hard package to beat.

Bryn Mawr College requires all freshmen students who want a job on campus to work for dining services. That translates to about 200 to 220 automatic part time employees a year. Director Chung-Templeton notes that some students jokingly – or not so jokingly – refer to it as “indentured servitude,” but in truth, the department ends up retaining about 50 to 55 of the students in subsequent school years as supervisors. “They see that there’s really growth potential, elevation and responsibility, and end up wanting to continue working for dining services,” she says.