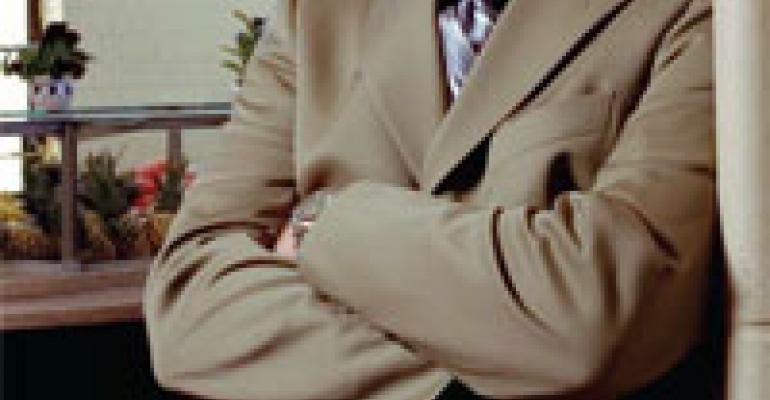 Dining at the University of California at Berkeley is not all organic granola, holistic tofu and hand-milled brown rice.

If only it were that simple!

In fact, the university's 30,000+ students and thousands of staff and visitors make pretty much the same demands for convenience, quality and value as at any other college, says Shawn LaPean, who has served as the school's director of dining for the past five years. And it is LaPean's success at meeting those needs as well as addressing contemporary issues such as sustainability that earned him the 2008 IFMA Silver Plate Award in the College/University category.

That success has been achieved in the face of some daunting obstacles that LaPean had to negotiate from the get-go, including an antiquated, much-maligned meal plan, outdated dining facilities, underperforming retail operations facing vigorous on-campus competition and a general lack of morale among the dining staff. (The latter had been aggravated by the department having gone more than nine months without a full-time director before LaPean was hired).

Yet in his five-plus years at Cal-Berkeley, LaPean led Cal Dining (the name he chose for the department to emphasize its new focus) to nearly double its annual sales from $24 million to $47 million, making it the fifth largest college dining operation in the country. Key to that increase was an explosion in the number of optional meal plans sold — from 399 when he took over, to more than 2,300 in the 2007-08 academic year.

LaPean has also upped the culinary component, modernized facilities, expanded some customer services, like extended hours, and added others such as an online grocery store. He also put the retail operations back in the thick of the campus competitive mix and — this being Berkeley, after all — made Cal Dining one of the nation's “greenest” campus dining departments by, among other things, launching one of the first certified organic salad bars on a U.S. university campus and playing an important role in the construction of the only “green” business-certified building on the Cal Berkeley campus.

His other achievements include boosting catering sales on campus by 220 percent in his first six months, spearheading a food court concept that produced a 60-percent increase in retail sales, and developing an award-winning website that serves as both a marketing and educational resource (for more on Cal Dining, see also the cover story in the June 2005 FM).

LaPean grew up in Bloomington, MN, near Minneapolis, and attended the University of Wisconsin at Eau Claire.There, he majored in political science. His first exposure to foodservice was working as grill cook at a golf course where a brother-in-law was general manager.

After graduation, LaPean migrated westward, first to Tucson and then to San Diego, working his way up in the restaurant business, from bartender to associate manager in the W.R. Grace Restaurant Co. seafood concept Reubens Plankhouse.

Unfortunately, Grace foundered in the late 80s and LaPean started looking around for a more stable environment. He wound up at San Diego State University as a central kitchen production manager.

When future Silver Plate winner Susan Wilkie took over as director in 1990 and began her program of introducing branded concepts to the campus, LaPean — a veteran of the branded chain world — was naturally chosen to head many of the projects. One was bringing the first KFC onto a college campus. A huge hit, it generated over $2,500 in daily sales right off the bat.

In early 1996, LaPean left San Diego to head back to Minnesota, but his tenure as associate director at the University of Minnesota lasted only a year — UM was getting ready to contract out its campus dining and he preferred a self-operated environment — before he left for Vanderbilt University. The weather was not only warmer in Nashville, but LaPean got to work under another future Silver Plater: then-director Frank Gladu. Unlike SDSU and UM, it was a small private university with a strong retail component already in place.

LaPean hit the ground running. “I got there in April 1997 and in four weeks I put together a business plan to redo our main cafeteria into a self-branded food court,” he recalls.

In 2003, LaPean became the top contender to take on the director's job at Cal Berkeley. He started that January, his debut coinciding with the opening of the newly renovated 850-seat Crossroads dining facility, a modern-looking, exhibition-style servery that gave a promise of what was possible.

LaPean's first challenge was to get his administration over the idea that Crossroads was a panacea, a one-and-done solution to the dining department's ills. For one thing, the lackluster offerings in the other dining halls put great pressure on Crossroads, where a kitchen designed to serve 2,500 a day was often swamped with more than 5,000.

Retail wasn't much better. The four campus retail restaurants were losing $450,000 a year despite revenues of $3.8 million.

“My charge was to stop the bleeding in retail and increase satisfaction in resident dining,” LaPean says.

He honed in on the meal plan as a major change driver. “One thing I learned from Susan Wilkie was that you not only have to add ‘satisfiers,’ but also reduce ‘dis-satisfiers’. That is sometimes almost easier — and the meal plan was a huge dis-satisfier!”

His solution was a point plan that could be used in both the dining halls and retail outlets. The new plan debuted in the 2004-05 school year and the impact was immediate, with voluntary meal plan sales more than doubling, to over 900. It is now at 2,373, representing $3.2 million in revenue.

The venues where those points can be spent have also been upgraded. Joining Crossroads in being substantially renovated was Clark Kerr Dining Hall in 2004 and Cafe 3 last year. Each now represents a distinct campus “neighborhood brand” with its own identity.

LaPean also revamped the on-campus catering operation, which had been losing $100,000 on only $200,000 in revenues annually when he got there. He split it into two separate businesses: a full-service operation based at Clark Kerr and Cal Catering Express, which delivers box lunches, coffee and breakfast platters to meetings and small get-togethers on campus. It now generates $2 million in sales annually.