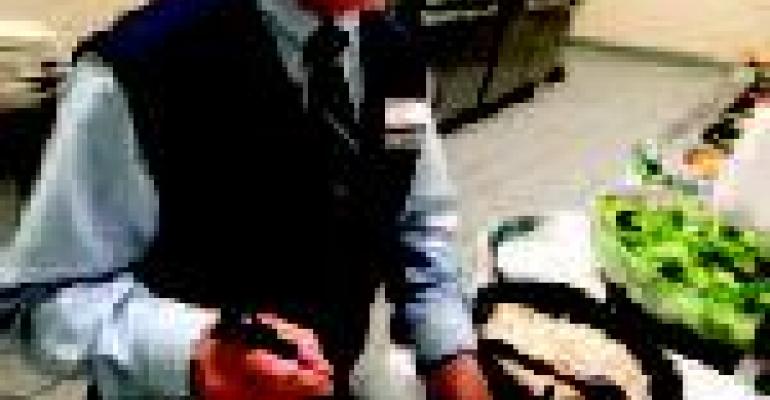 Under the Radar
Barclay concedes the past few years have been difficult for a company like Southern that depends so heavily on B&I. "Our growth rate has been diminished over the last few years," he concedes. "But," he quickly emphasizes, "we're very comfortable with what we're doing simply because we're healthy and we have long-term relationships. We see the market doing nothing but getting better and better for us."

Southern has always kept its focus on the idea that, ultimately, business success is measured not by how many dollars you generate but by how many you keep. And it has apparently been very, very solicitous of its bottom line. "We've never had an unprofitable year," Barclay notes proudly.

We'll have to take his word on that, since the privately-held firm doesn't release details of its financials other than the top line revenue number. Yet, something must explain the undeniable reality that Southern remains not only a factor in the B&I segment, but one that continues to post impressive account wins, most recently Fermilabs in Chicago, won away earlier this year from one of the Big Three.

In 2004, says Hoefer, Southern will have added eight new accounts while closing five. That net gain of three doesn't sound like much but does prove that the company is not gliding through the lean years merely by holding on to a small cadre of loyal longtime customers while battening down costs.

Overall, Southern has averaged about 90 accounts at a time over the past five years. About 90 percent of its business is in the B&I segment.

In B&I, Southern has attracted some impressive clients, not only in the South, despite its name, but as far away as New Mexico, Cleveland and even Seattle. It operates in 16 states, with regional offices in Chicago, Atlanta, Austin and Charlotte.

To explain Southern's appeal to these clients, Barclay and Hoefer deploy the usual underdog rationales: a "closer-to-thecustomer" business model, greater operational and menu flexibility at the unit level, less pressure to meet short-term financial targets because the company is not publicly traded and a firm belief that there are clients out there who prefer going with the "little guy" rather than one of the "Big Three."

"Our goal is to be the alternative to the big companies at the table when clients decide the direction to take," says Hoefer.

How to Grow
Whether it's the "little guy" or "big guy," management companies today operate in a B&I environment with little cushion. P&L accounts are the rule. At Southern, they outnumber fee contracts four to one.

"We have to make our own way," Hoefer concedes, "and that's become somewhat more difficult with the recent escalation in food costs."

To cope, the company has to be selective and subtle. "We try to increase prices incrementally and on selected items," Hoefer says. "You have to get creative by offering higher-priced choices that have appeal so that you build those check averages and increase participation. We find that customers are willing to pay extra if they feel they are getting their money's worth. For example, food that is prepared fresh in front of the customer and customized to individual preferences can command a premium price over the same dish, but offered 'pre-prepared.'"

Is light glimmering at the end of the B&I tunnel? Bill Wallace, Southern's Southeast regional manager (with 16 accounts in the Carolinas, Georgia and Tennessee) says things are "looking up. Layoffs have stabilized, participation has shown a slight increase and check averages have remained stable." His territory has added 10 accounts in the past three years, Wallace says.

Building incremental revenues in P&L environments is one way to grow the top line. Other strategies include adding services and expanding into other segments.

But Southern has not demonstrated much interest in straying too far afield from its core competency. It did offer environmental and building management services in the past but these are miniscule parts of the business today. Also changing is its approach to vending, which used to comprise about a fifth of revenues. Today, Southern still offers vending management services but the actual execution is often subcontracted.

The most recent vending initiative has been the "Smart Snacks" program, introduced a few years ago, which offers a variety of healthful snack options (fruit, granola bars, low-fat chips) in vending environments.

As for considering other segments outside B&I, Barclay says Southern is looking primarily at niche markets that can be served using the company's existing programs and expertise. Private schools is perhaps the most prominent such foray and one with the greatest growth potential, he notes. Currently, the segment accounts for the bulk of the company's non-B&I revenues.

Barclay says private schools are a good fit for Southern because their expectations are similar to those of B&I clients and Southern can use many of its existing menu concepts to service them. The company's strengths in being able to individualize programs to fit specific clients is another advantage.

"It's a good niche for us because they like the attention we can give to them," Barclay confides.

The recreation segment is another potential area of expansion. During 2003, Southern landed the contract to offer foodservices at the Birmingham Zoo, and Hoefer says the experience could allow the company to add other similar venues in the future. "Venues like that particularly provide significant catering opportunities, and catering of course is already something we're familiar with because we run catering in many of our business locations," he notes.

The "Sore Thumb" Factor
Private schools, zoos and special event catering are nice add-ons, but in the end, Southern will rise or fall based on its success in B&I. To get the kinds of clients that fuel real growth, Southern increasingly will have to compete with the industry's Big Three. Is it up to that challenge?

To illustrate Southern's strategy to position itself as the independent alternative, Baclay cites an emerging contract opportunity where a major multi-site client is consideringconsolidating its foodservice managementoperations under one contractor. Southern already manages one of this client's sites and has qualified to be one of the bidders for the overall contract. Presumably, the Big Three will also be in the running, a prospect Barclay professes to welcome.

"I love it!" he exclaims. "I hope it's just them and us because we're going to stick out like a big ol' sore thumb."

That "sore thumb" factor is one reason Barclay also welcomes the consolidation that has radically shrunk the number of independent firms operating in the B&I sector.

"Sometimes you can't do anything about that," he concedes, "but I think we've made inroads. I think they don't like to get into a situation where they have to compete with a solidly managed regional contractor that already has a piece of the business, meaning it has already demonstrated what it can do."

That validation by proven performance is key to Southern's sales strategy, whether the client being pitched already has experience with the company's service, or has to be educated by others who have.

"Of course you first have to prove that you are capable of managing the business," Hoefer concedes. "But once you've done that, you can then go on to describe what differentiates you. What we've found to be especially effective is not so much us talking but our existing clients talking and saying what we've been able to do for them. Nothing we can say is as effective as having a Bosch or a Fermilabs say it because these are highly respected companies."

In positioning itself as the independent alternative for clients who prefer to work with a management company other than one of the Big Three, Barclay claims Southern is looking to become the "last independent standing."

Future Growth?
Despite the aborted healthcare foray, by the mid-1990s Southern had reached $50 million in annual revenues. The late-90s saw a significant expansion, with revenues hitting $68 million by 1999, but since then growth has plateaued. Revenues for the last full year, 2003, were $68.775 million, actually down about $100,000 from 2002. This year doesn't figure to be much higher.

That begs the question: does Southern have to start growing the top line to remain a viable enterprise?

"Yes, and we will," Barclay insists. He notes not only that the company is now going after fairly big-time business for which it competes with the Big Three in almost every instance, but a number of other factors have also recently begun to impact operations in a positive way.

"The overriding thing for us has been a maturation of our management team,"

Barclay notes. "As the Big Three have gone into acquiring other companies, we have ended up attracting some people to our company with very strong backgrounds in those organizations, and that team has 'gelled' now in a way similar to how a sports team 'gells' into a championship squad."

He also notes a greater recent emphasis on training that has led to more operational efficiencies in areas like waste reduction, and an updating of in-unit marketing operations, something he credits Hoefer for.

"Being a small company," he notes, "I think we were always strong in things like client relations, being responsive, being flexible, but traditionally we tended not to be as much in touch with the industry trends— things like exhibition cooking and take-out that are more than just short-term fads— but now we are."