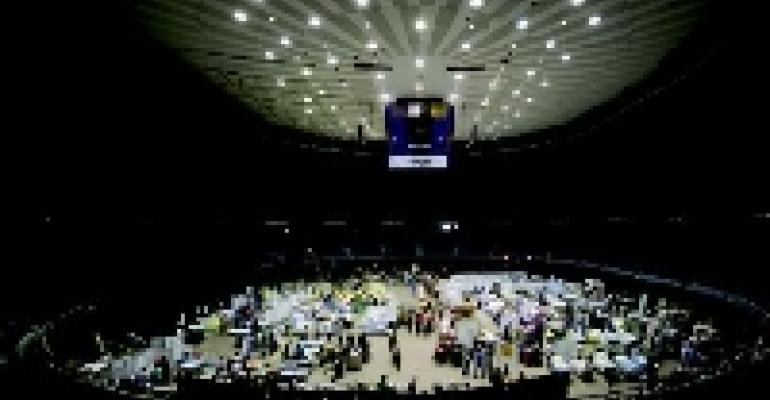 His story is one of thousands that make Hurricane Katrina the worst natural disaster in our nation's history. Its aftermath damaged beyond repair thousands of homes, schools, hospitals and businesses in Florida, Alabama, Mississippi and Louisiana, leaving thousands of people in emergency shelters.

In the midst of this devastation in New Orleans, Biloxi, Mobile and elsewhere along the Gulf Coast, food and water became basic human needs. And just as they have so many times in the past, foodservice operators large and small found their skills, teams and facilities uniquely suited to provide help and support to members of the many affected communities.

Large institutions, in particular, found themselves facing both unique challenges and unique opportunities

The Largest Field Hospital in History
The Pete Maravich Assembly Center on the LSU campus was converted into a field hospital for thousands of evacuees from New Orleans and other affected areas. It has been deemed the largest acute-care field hospital in U.S. history. With 800-beds and at least 500 staff members, LSU was feeding, at cost, four meals a day to the hundreds housed in the PMAC and in other areas of the campus.

"Quite honestly, we didn't have the staff or the supplies on hand to feed the number of people who were here. It was overwhelming," says David Heidke, regional district manager at LSU. "We went through it meal by meal, day by day."

Chartwells, a division of Compass Group, sent six managers and chefs to help on campus. LSU used both their primary distributor, Conco, as well as a number of local suppliers. There were three groups of local volunteers (Bananno's Fine Catering, a local Baptist church group, and the nondenominational chapel on campus) who helped serve meals prepared in offsite kitchens.

"We took in 35,000 students, not to mention staff, doctors, volunteers, National Guard, and FEMA," says Heidke. "The successes of our relief efforts were in great part due to the volunteerism of students and locals, the willingness and support of Chartwells, my staff and the University, as well as those who reached out from other communities, like NACUFS."

Schools also mobilized to help Gulf Coast communities and colleges ravaged by the hurricane. In Biloxi, Gary Whittemore, foodservice director for Biloxi Public Schools, was officially appointed overseer of 'emergency personnel' including production and sanitation at the schools which in many cases had been converted to emergency shelters.

New Entitlements
To facilitate feeding of the children of evacuees the USDA Food and Nutrition Service issued a memorandum outlining a policy for school children in devastated areas. The memo addresses feeding children who may be temporarily housed in other states as a result of evacuations.

The USDA issued a waiver of normal school lunch accountability systems for schools in the disaster area. It permits flexibility in meal patterns, milk requirements, meal times and offer-versus-serve policies. In addition, the waiver allows school offices to serve meals free to homeless families and children outside of the individual application process.

The Texas Education Agency (TEA) is one of many systems welcoming displaced children into classrooms across the state.

Districts with a significant influx of students due to the hurricane, such as Dallas Independent School District, may increase entitlement under the federal free and reduced-price lunch program automatically to the extent students qualify as homeless.

"We enrolled about 300 displaced students in three of the Dallas schools," says Dora Rivas, division manager, Food & Child Nutrition Services, Dallas Independent School District. "It's difficult to hear of the thousands of people stranded until they are able to return home, make new living arrangements or find jobs."

Foodservice association job banks are becoming an indispensible tool for those rebuilding their lives after Katrina. For example, the American Society for Healthcare Food Service Administrators (ASHFSA) joined other organizations such as Women's Chef & Restaurateurs, Council of Independent Restaurants Association, and the James Beard Foundation, in establishing job banks to help members who have been displaced from their jobs to find employment. ASHFSA is encouraging members and non-members to contact the national office about temporary and permanent job openings.

"It is difficult for any of us to comprehend the extent of the devastation," said Regina Toomey Bueno, ASHFSA President. "But, hopefully, together we can join in providing some security, albeit small, to our members along the Gulf Coast."