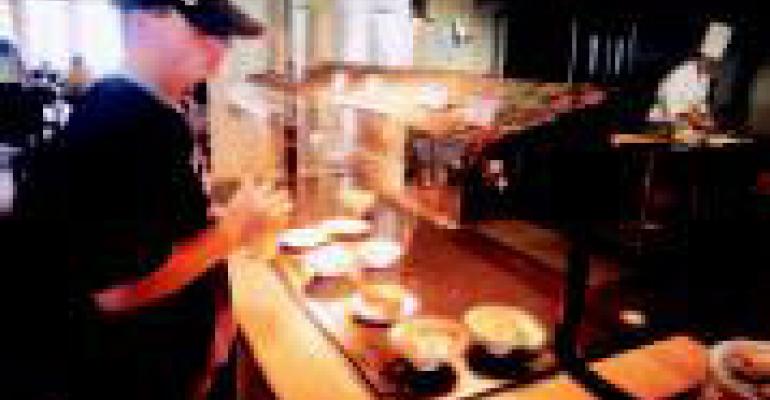 Students take them for granted. But when parents walk into a contemporary college food court, marketplace or scatter-system servery today, they never fail to comment on the dramatic changes that have taken place since their own days on campus. Typically, the classic tray lines are gone. Often, so are the stainless steel counters, the steam table serving lines and predictable hot meal cycle menus.

In their place—an ever-widening variety of food stations, whether freestanding, modular or mobile. Even where existing servery lines remain in place, they have often been re-engineered to provide separate station concepts that give the impression of a long line of mini-restaurants, each with it's own entree concept, food customization options, display ambience and flavor profiles.

That is what students expect today, and that is what college foodservice directors strive to give them.

Yet while much attention has been given to the evolution of the menus, concepts and brands typical of today's campus dining, less has been paid to equally dramatic changes in underlying station design. But in fact, station design has had a major impact on the way directors manage labor, traffic flow, menu rotation, production support, merchandising and even participation rates.

For this article, FM interviewed college directors, foodservice consultants, architects, culinary professionals and others to identify the most significant trends affecting station design, the operational solutions stations are providing and the new capabilities they will deliver in the future. Here's what we found.

Fresh, fast and fabulous “The most obvious driver in campus dining and in station design is your ability to satisfy a huge influx of customers in the short periods of meal time caused by university class schedules,” says Frank Gladu, director of dining services at Vanderbilt. “Not all dayparts are as hectic as lunch, but lunch drives our platforms.

“Satisfying customers is also more complex because speed of service is no longer enough. Service today is characterized by exchanges like, ‘What do you want on that?' and ‘Which flavor profile would you prefer?' even if the food is produced in streamlined fashion. Customers want variety, customization and food they know is fresh-prepared, not cooked who-knows-when, behind a wall in a back kitchen.

“As operators, we have to be on guard,” he adds. “We get so hung up on the ability to have product in place when it's needed that we sometimes sacrifice quality and freshness to meet demand.”

Customers today “want individual service, but are reluctant to wait in any kind of line,” agrees Paul Nye, director of innovative design solutions, part of the in-house consulting division of Aramark Corp. “That has led to stations that offer complete meal solutions, so a customer doesn't have to shop at multiple stations.”

Another trend: “Narrower menus,” adds Nye, “with variety added through customization rather than so many choices. Even if you have a hundred items on a salad bar, there can be a perception there is not much variety. But a custom salad station, with a menu that offers ingredients and dressings selected to give distinct flavor profiles, is perceived differently.”

In Aramark's “Fresh Food Co.,” a servery concept it has installed in about a dozen colleges, Nye says “that means stations that offer three choices, instead of six or eight, and rotating those choices daily.”

At the same time, this approach means “you have to manage the menu mix more closely,” says Mark Baida, executive chef at the University of Southern California. USC's Parkside residential dining facility offers a unique “tasting/grazing” approach to meal time, with quarter size portions prepared fresh, plated and on display at each station.

“Our managers are expected to make a beginning forecast and compare it to actual at the end of each meal,” says Baida. “We keep notes to help us improve our future forecasts. How many portions did they find it useful to have ready? How did a particular item do in competition with the other things offered in the servery that day? If you pair an item with something else, it may do better or worse next time.”

This need to adapt stations to changing menu concepts makes achieving production efficiency more difficult and has driven station design to keep up.

“Instead of designing a pizza station, we design a station around an oven, or several ovens, that can do pizzas or fresh bread and desserts and can easily handle change, like a move to add calzones or baked eastern flatbreads.

“Alternatively, you might organize a station around a rotisserie and a grill. That type of configuration can do anything from steaks to rotisserie vegetables, from gyros to tacos, from Mexican fare to Brazilian fare. Good station design lets you change your menu without significantly changing your facility.”

“I will not put in a gas fired wok that is one-dimensional,” he adds. “Instead, I will put in a range that can be outfitted with wok fryers in rings so the station can be adapted to changes in trends and demand.”

Particularly in regions with high labor costs, operators want stations designed so workers can be allocated to wherever demand requires them. In-line stations, properly designed, make that easier. So does careful siting of equipment that can be shared.

“We have a stone oven pizza program in line near a deli station, so sandwiches can be made with a rotation of fresh breads coming out of the same oven,” says Rich Berlin, director of campus dining at MIT.

“Or, if someone at the deli wants a toasted sandwich, it can be popped into the pizza oven. If you design station menus for this kind of shared flexibility, it expands the variety of what you can offer and how much customization you can provide.”

Operators also need to carefully analyze the “usability “ of station space, says Mantini. “A step is different than a reach. If a worker has to keep stepping, it is like needing another body. If he can reach, it is ergonomically better. Those extra steps represent labor you are paying for.”

At the Eleanor Roosevelt College at UCSan Diego, the new residential dining facility that opened in September has four display cooking venues designed around a standard grill and a Euro kitchen with an island suite.

“That's more display cooking than is typical,” says Webb Design President Jim Webb, the consultant on the project. “But the goal is to have a counter experience in which you feel like you are in the kitchen and a meal is freshly-prepared, whether it actually is or not.”

“We have discussed platter-style display service as an option with many clients,” Webb says. “Carving and slicing meat loaf and roasts on demand gives customers a sense of just-in-time service.

“College operators should look at how they merchandise food at well-run amusement venues like Disneyland,” Webb adds. “There, customers do not see their food as fast food and it is worth studying the different ways they approach the service challenge.”

Another caution: design stations with future, not existing traffic, in mind.

“We have a beautiful facility that was built for 2,500 meals a day, but is serving 4,200,” says U of C-Berkeley Foodservice Director Shawn LaPean. “The storage needs for that volume were not planned for; as a result, we need much more frequent and less efficient food deliveries. We are equipped for some cook-chill but don't have enough refrigerated storage to make full use of it.”

Coping with the added demand necessitates its own flexibility. In LaPean's case, that has meant more use of frozen convenience foods and modification of production flows to employ more batch production and less cook-to-order.

“You still need the perception of custom cooking,” he says. But with more demand than capacity for meals prepared at a Mongolian Grill station, “we added woks to add capacity. Customers' attention is on the chef at the grill, but a lot of what is served is prepared in the woks, with customizing ingredients added at the end of the run.”

The upshot: “Make sure you earmark capital in the budget to cover the inevitable changes you'll have to make in stations after you open them,” LaPean suggests. “Every new station has some limitations you discover only after the opening.”

Marketplace-style designs have received a lot of attention in recent years, “but they're not the right approach for everyone,” he says. “A marketplace increases the amount of labor and space required as well as capital costs. You need to have the customer base and traffic to support one.

“If you don't, you instead should be looking to design stations that allow more multitasking and stations that can share common areas and resources. Think of deli and pizza stations that are side-byside, sharing an ingredient table; or deli and bakery stations that share a convection oven and mixing equipment.”

Countertops generally need to be able to do more, says Aramark's Nye. “Action stations need to be able to visually merchandise the ingredients—remember, it is not the fixture that is the message, but the food. “Look for drop-ins that can handle either hot or cold; for more heated and cooled display space that can merchandise individual-portions or plates as they are prepared.You want customers to be able to request-a customized dish, but you also want them to be able to take a dish they want right from a heated or cooled shelf.”

“Sneeze guard configurations can be some of the most difficult things to nail down,” says Bob Pacifico, FFCSI, executive vice president of Romano Gatland, Inc.

“They tend to lock you in because of code requirements, which grow more stringent all the time. But you need them to be flexible and adjustable. Is your station going to be self service, or behind glass? Can the sneeze guard be adjusted to act as a guard in the morning and as a glass case front in another daypart?”

Also, as contemporary servery designs have brought the cooking process out of the kitchen and into the serving area, supply lines have lengthened or disappeared.

“Remember—you are often out there on an island today. You are not standing with your back against the kitchen, where all the resources are,” says Kooser.

“You have to look at such stations as self contained restaurants, often with a design similar to that of a quickservice restaurant, even though they may not be preparing traditional quick-service food.

“You can't count on extra help coming from the kitchen” during a lunch rush, he adds.

Ergonomics issues are sometimes created by the stand-alone station approach, says Sodexho's Mantini. “Ask yourself— if you had to stand and work a station for eight hours a day, how would you feel about its design?” he says.

“I'd rather have a cold well or reach-in box than a cold drawer you have to bend down to reach. Have a kitchen designer do all that bending and see which he prefers!”