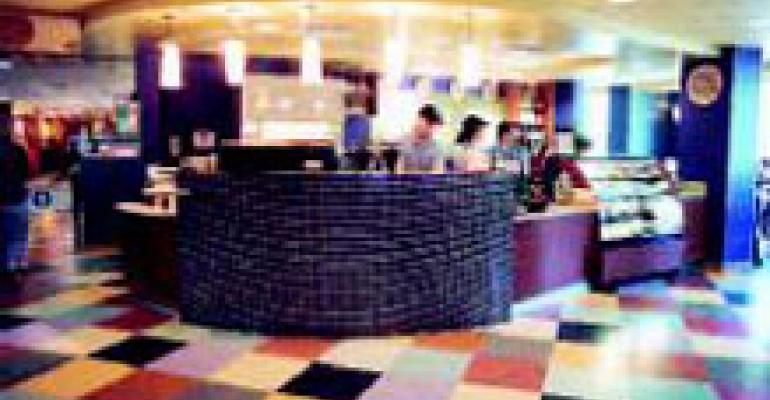 Influencing the design team Every source intereviewed for this story emphasized the importance of having directors and chefs involved in the early stages of station and servery design. “That is the best way to ensure that practicality and flexibility are stated goals early-on,” says Pacifico.

“Take ramping up and ramping down— in some locations that can mean taking a station that does 350 covers a day to a special event that handles 3,000 in a single afternoon,” he adds.

“The same space may have to open for an evening event where it does only 75 covers over a 2-3 hour period. The design team needs to understand those needs and how staffing and layout interact in those kinds of situations. If the layout won't allow a single person to operate the station, you will always have to have two as a minimum.”

Directors can also help educate the team to the realities of the campus foodservice environment, says Ricca. “For example, there is a big difference when you talk about an all-you-care-to-eat platform, compared to a cash-only platform,” with registers at each station. Designing stations to be able to handle cash requires extra space and a different configuration.

“Directors should try to establish which approach is needed as early as possible in the process,” Ricca suggests. “When this decision is made late in the game it can add costs and complications to station design.” At the same time, the advantages of structuring new food stations and serveries so they can readily handle both retail and residential meal plan traffic efficiently figures prominently in the future plans of many directors.

At the University of Washington's new Terry/Lander Hall facility, the newlyconstructed cafÈ building that joins both residences has been designed for easy street access, with security access only from it into the actual residential areas. The same is true at Ohio State, where the new Neil St. facility was designed to attract traffic from the Medical Center across the street while also serving as a “swipe friendly” option for campus students on meal plans or with cash cards.

At Vanderbilt, traditionally a retail-only environment, the addition of a meal plan to encourage community dining means “the meal plan is available simultaneously with retail,” says Gladu. “The stations have to provide food that will satisfy both types of customers. Only the cashier needs to know whether you are on a meal plan or on a cash basis.”

Coping with the intense peak demands of the college segment creates its own training issues. “When you have stations designed to offer customization, the person behind the counter needs to understand individual customer needs and negotiate the specifics quickly,” says Executive Director of Dining Nadeem Siddiqui, of Stanford University in Palo Alto, CA.

He believes college directors also need to work on “training customers so they know how to interact efficiently with the person behind the counter. “You have to encourage new customers to learn from experienced ones,” he adds. “Every time we open a station,we put a few staff members in the crowd at the busiest time, to show customers the most effective way to order. If you do it right, you will have ‘seeded' your customer base with the knowledge to help make the station operate more efficiently.”

Many of those interviewed for this story agreed that ventilation and exhaust hood requirements need to figure more prominently in plans for flexibility, beginning earlier in the design process. “It's not uncommon to find facilities that will require five or six hoods but which have been budgeted for two or three,” says Kooser.

“If you have a smaller operation, that's another economy you can add, by designing stations that share ductwork,” he adds.

“It almost never pays to skimp on ventilation equipment,” agrees Bob Mesher, a principal with Mesher Shing Architects and Interior Designers “It doesn't cost that much more to put in the right hoods when you are starting out.

“Take a kiosk that used to serve pizza and has been outfitted with a Type 2 hood to vent hot air and gas. If you want to replace it with a stir-fry concept, you have a hotter temperature and need grease extraction and a fire trap. That requires a more complex hood to meet code and can be expensive to retrofit.

“Sometimes you can dogleg one duct into an adjacent one, but if you want that option, ductwork has to be specified initially to make it available at a reasonable cost.”

Managing dayparts and P&L's Demand for extended hours of service has also caused directors to re-think station needs. OSU took such an approach. So has MIT, in its plans for the foodservice to be offered at the new Stata Center under construction on that campus.

According to MIT's Berlin, a prominent feature of the Center will be a so-called “ student street,” a serpentine-shaped space almost 300 yards long. Foodservices will be managed by Sodexho and will be offered at a strategically located “fork” in the space, capturing traffic at a crossroads where it comes from two parts of campus.

A combination coffee/pastry station will anchor the space from 7:30 a.m. to 10 p.m. Set back about 10 feet is a line of other stations that will include a sushi bar, Asian and Indian cooking, deli sandwiches and a bubble tea concept, among others. Most of these will be open only between 11 a.m. and 3 p.m., minimizing staffing requirements.

Meanwhile, as demand for retail-oriented environments has increased, the menu crosssubsidization strategies of the past have been phased out. Station concepts “must be financially viable in terms of meeting their own P&L objectives,” cautions Siddiqui.

“You might be able to have a station designed to draw traffic or provide ambience, which itself is not the most efficient or profitable station in the mix, but you can't afford one that isn't at least self-supporting. You have to manage each by its own numbers so you can determine if it's successful or not.”

At the new U of W facility, “each station has its own order list, labor and inventory requirements and revenue stream,” says Executive Chef Jean-Michel Boulot. “Each one has to stand on its own. And if a concept proves not to be viable, the station has to be flexible enough that it can be modified to support one that is.”

P&L demands have led to a lot of creativity in terms of using self-service in nontraditional ways. At the new UC-San Diego dining facility, special event “restaurant nights” offer diners a full service menu at higher-than average ticket prices, but keep meals affordable by using “partial service” in which customers place entree orders at the counter, to be table-delivered when ready, but carry other meal components to the table themselves.

Merchandising takes center stage In order to produce high volumes of freshlyprepared food, “we have de-coupled production from pre-production,” notes Pacifico. “That has let operators shift more of the labor to off-periods.”

It has also put more of a station's space emphasis on managing the display of finished product. “Food is much more visible in today's environment,” he adds.

“Designers are using display technologies from the supermarket world in very creative ways to put food right in front of a customer's eyes. It is very European—‘paninis in your face,' so to speak.”

That means a dramatically different approach to the space right in front of the customer, says Ricca.

“Rather than thinking of a serving area as a single flat plane, 36 inches above the floor, that fills up very quickly, you need to think of filling the face of the counter,” he suggests. “It may be with retail products or artifacts, but they should create a market feel and give depth to the space.”

Ricca suggests the original Eatzi's location in Dallas as a useful model.

“As a customer there, you feel enveloped with product, from low shelves and cases to product way above your head that you can't even reach. Your eye can not find a space where it is not stimulated by something that contributes to the ambience. You never miss the notion that this is a place of abundance.”

At U of W, innovative display options are a key features of a new station concept Boulot is working on for a dining facility set to open at Terry-Lander Hall in September.

Designed as an Asian concept, the station will feature an enclosed, heated glass case in which Boulot will display hanging product, like barbecue, duck and whole chickens prepared in different styles.

The goal is to merchandise food “much like you would find it displayed behind the front windows of food stores in Chinatown,” Boulot says. Menus will be displayed on a plasma screen that can be controlled from the chef's office.

The new facility will also feature a “chef's table” and cookbook library integrated into a display kitchen that is central to the four main stations in the servery. “It will serve as an R&D facility, a training location, a vendor sampling area and a special dining option for VIP events,” Boulot adds.

Equipment has to be specified with this kind of flexibility in mind, “and you have to hire chefs who know how to build menus around it,” says Siddiqui. “What is a salad bar today may be a carving station tomorrow. Your chefs need to have the creativity to look at a station's equipment and suggest flexible menus to match it.”

Common mistakes directors make? “Not carrying a concept through to completion,” Mesher says. “Failing to brand it fully— developing the menu, but not working out the concept so that the menu is appreciated. Delivering fresh food but not packaging it correctly so it is perceived as fresh.”

The biggest mistake of all? “ Underestimating the expectations or sophistication of your customers,” Mesher concludes.