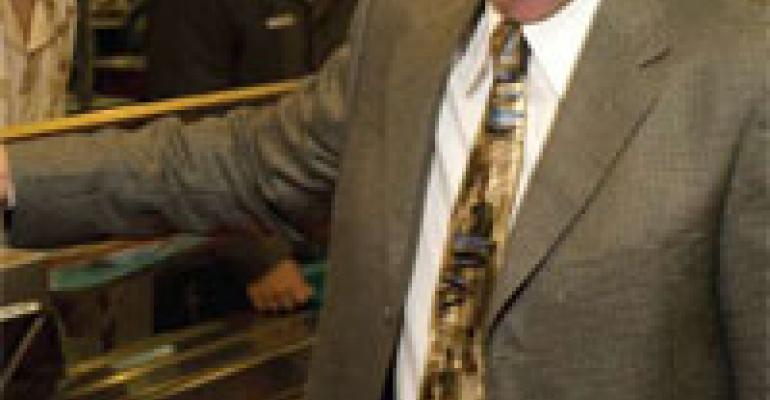 Few if any Silver Plate winners have worked in as many segments as Steve Hammel, winner of the 2008 IFMA Silver Plate Award in the Specialty Foodservices category. The award recognizes his accomplishments as dining services program manager for the U.S. Navy's Southwest Region, but military foodservice is only the latest chapter in a career odyssey in which Hammel also made highly successful stops in the lodging, B&I, senior dining and retail coffee shop segments.

For the Navy, Hammel heads what he describes as “one of the largest self-operated foodservices in the country,” including retail, “galleys” (dining halls reserved for military personnel) and a full-service catering program.

Among his accomplishments since joining the department in 2004 are spurring sales increases of around two percent annually, primarily by using his wide-ranging industry experience to promote a more aggressively commercial approach to operations, marketing and merchandising. He has also cut costs, including the cost of goods by five percent, through sharper purchasing and greater control over inventory levels.

Though the galley operations he oversees remain primarily “straight-line” set ups because of the massive numbers they must serve, Hammel has upgraded food quality and consistency through the increased use of convenience items and revised menus to provide for expanded selection and more “healthy” choices. “We have extensive salad bars and look to emphasize nutritional value,” he offers.

“Like colleges, where students have to eat in the dining halls day after day, we are also constantly asking ourselves, ‘How can we make it different each day?’ We make sure we always have healthful, high quality meals with great variety as well as everyday standards like burgers.”

On the retail end, Hammel has brought more commercial brands to the bases, established a loyalty card program that has drawn more than 15,000 participants and increased the range of options, from snack bars to delis, to meet customer needs in the different environments.

“It's a joy to really do something that serves our folks in the military,” Hammel says. “It's inspiring to work here.”

On a practical level, given that military enlistment is entirely voluntary, he says he wants to ensure that his dining operations do their part to encourage re-enlistment.

There was always something out of the ordinary about Steve Hammel. When he was a sixth grader, a vacation trip to Miami, where some family friends owned a motel, spurred an interest in the hospitality business. When he returned, he told his teacher he would go into the hotel business when he grew up.

“Many years later after graduating from college with a hotel degree,” he says, “I went back to visit her and she said, ‘You know, in my 30-odd years of teaching, you're the only student that ever stayed the course for what he said he wanted to be!’”

Hammel's first hotel job was with Host International. “They had built a Marriott across the street from the St. Louis airport, so I wrote Mr. Marriott a letter saying I was going to school and I knew he was building a new hotel across the street and that was looking for a summer job.”

Talk about going to the top! Why not just apply through the usual channels? “When you're 19 years old, you don't know any better,” Hammel laughs.

Upon graduation, he joined Marriott full-time as a trainee, but rather than the “front-desk” environment he originally envisioned, “I trained in the catering and room service areas at the Chicago Marriott.”

That led to stints at the Marriott Lincolnshire Resort as room service manager and then the Hyatt Regency Chicago as restaurant manager and later assistant to the regional vice president before a move to Atlanta to work for Radisson Corp.

It looked like the sixth-grade premonition was going to flower into a career in the hotel industry, but then he made a sharp turn.

“An industry acquaintance who had gone into recruiting said to me, ‘You know, I think I have the perfect place for you,’” Hammel recalls. The “perfect place” was back in Chicago, but not with a hotel chain. It was with First Chicago Bank, which was looking for someone to manage in-house dining.

Hammel served as vice president of corporate foodservices for 10 years there, overseeing all the private dining rooms and employee dining operations of the company.

He then did private consulting for three years before getting back to the front lines, this time in senior dining with Forum Group, which operated luxury retirement communities. He was head of all food and beverage operations, from rental apartment dining rooms to foodservice for assisted living residents. When Forum Group was acquired by Marriott in 1996, “I again decided I wanted to do something different,” Hammel says.

“Different” is putting it mildly. From serving meals to seniors, Hammel migrated to serving meals to kids and families at Disneyland Park, first as an operations manager but soon moving over to concept development for Disney's California Adventure.

“We were doing all the restaurant designs for the park,” he says. The experience gave him valuable insight into the dining and service expectations of a broad range of customers, a skill he further honed in his next stop: director of retail food & beverage for Starbucks Corp.

This was in the early 2000s, a time when the Seattle-based coffee giant was starting to move past its original coffee roots. He oversaw a number of successes, such as the holiday hit the Cranberry Bliss Bar, before adding unit-level food safety to his set of responsibilities.

Starbucks was booming. “When I got there we had about 1,200 stores and when I left we had 6,000,” Hammel says. That boom provided great learning, but by 2004 he was ready to seek a new challenge.

The position with the Navy opened up because the previous holder of Hammel's title decided to retire and recommended that her successor be brought in from the outside in order to bring a new perspective and commercial experience. Hammel, with his wide experience, seemed perfect.

He has indeed brought his experience to bear, not only bringing greater commercial emphasis and customer focus to his operations but also working with the outside world, especially manufacturers. Manufacturer representatives are regularly invited in to present new products and tour the facilities to get an idea of what the operations are like and what kinds of products might fit in.

The education is beneficial for both sides. “I have yet to meet a manufacturer who thoroughly understands what we do here — and I would say the same about myself when I first started,” Hammel admits.

Now, he wouldn't change it for anything. “This is something I had never thought of before, but now I think it's the best thing I've ever done in my life.