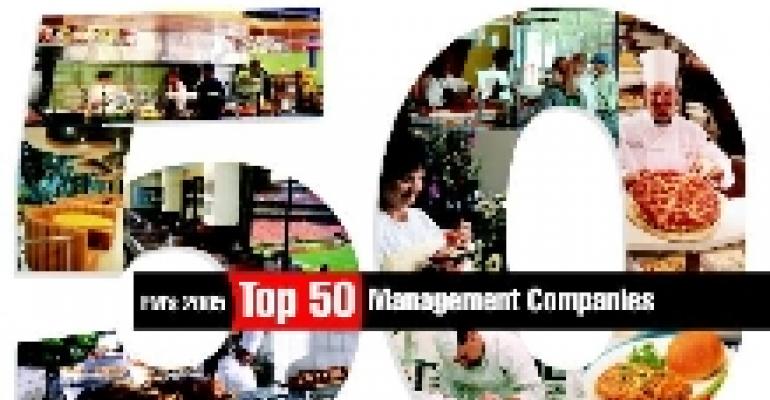 Food Management has been compiling and publishing a listing of the noncommercial foodservice industry's 50 largest contract management companies annually since 1998. In that time, the contract sector has undergone a significant evolution characterized by consolidation at the top and the emergence of three broad-market companies that clearly dominate the sector.

While AVI remains primarily a vending/office coffee provider, it has made significant efforts in recent years to grow its manual foodservice business, which we estimate is now around 10 percent of revenues, or about $45 million. Our philosophy has been to include companies in the Top 50 if their manual foodservice volume alone would qualify them for listing. This omits most vending specialists that do little if any manual foodservice, but encompasses firms with broader business models like AVI and All Seasons Services (#10).

Once listed on the Top 50, companies are ranked according to full top-line revenues, including vending, OCS and other non-manual-foodservice-related activities.

The second major addition to the 2005 Top 50, Xanterra joins other prominent contractors to the recreation/entertainment segments that populate the Top 50's upper half. However, Xanterra is the only one of these firms whose clients are almost exclusively national and state parks. As such, much of its business involves non-food-related activities like managing lodges and hotels, operating retail shops and providing other visitor services.

The revenue number that determines each company's place in the Top 50 is its domestic top-line revenues for the most recent completed fiscal year (in past years, when we asked for estimated numbers for a year if actual numbers were not yet available, we occasionally received estimates that later did not agree with final actuals). Because most companies in the Top 50 operate on calendar years, most will show a 2004 figure. In the few cases where a company completed and compiled 2005 fiscal numbers, we've used that figure and it is noted in the listing.

Other than the additions of AVI and Xanterra, the 2005 Top 50 diverges minimally from 2004. The "Big Three" remain at the top followed by 11 companies with volumes over $100 million.

Of the 11 "midsize" players, only three ( Thompson Hospitality, Valley Services and Gourmet Services) can be characterized as primarily being manual foodservice providers to the traditional noncommercial core segments—corporate dining, college/university, schools and healthcare.

The other eight are specialists, many for various recreation/entertainment segments. Guckenheimer (#8) focuses on high-end B&I almost exclusively while Guest Services (#9) realizes the majority of its revenues from serving government facilities, museums, resorts and the military. As noted, AVI and All Seasons are primarily vending/office coffee services providers.

The sales volume shown is for Aramark's domestic Food & Support Services business for fiscal year 2004, which ended last October ( U.S. Food & Support Services sales through the first three quarters of fiscal 2005 were $5.3 billion). It includes revenues from both foodservice and the many nonfoodrelated support services (facility management, maintenance, housekeeping, etc.) the company offers. Not included in this number is an additional $1.827 billion generated by the International Food & Support Services unit. Total company sales—including Aramark's Uniform & Career Apparel business— were $10.192 billion. (The segment percentages listed above reflect only U.S. foodservice business). In major company news over the past year, Joseph Neubauer returned last September to the helm of Aramark as chairman and CEO less than a year after stepping aside in a major top management restructuring. The announcement came just as the company wrapped up its involvement as the food service provider to the 2004 Olympic and Paralympic Games in Athens, Greece, the company's ninth Summer Olympics since 1968.

Other than growing its business, Aramark's primary focus in the past couple years has been a strong research effort, with studies targeting America's eating patterns and preferences,"tween" and teen eating patternsand preferences and the growth in demand for vegan alternatives among college students. Another study examined outsourcing in higher education. In the healthcare area, the company launched its Customer Close-Up Retail dining initiative earlier this year.

Currently, Aramark manages dining and food services for 1,300 business dining locations, 525 correctional facilities, 400 colleges and 420 school districts, 388 hospitals and long-term care facilities and 228 recreation and convention venues. It also manages services at 51 conference centers through its Harrison Lodging division and provides vending services to 3,100 clients and office coffee at 49,000 locations, the latter not included in the number of contracts listed above.

A division of London-based Compass Group PLC, Compass Americas was known as Compass Group North America until the consolidation of its Western Hemisphere businesses into a single unit under the direction of former Compass North America CEO Gary Green earlier this year. The unit posted strong like-to-like growth across most of its business segments in its 2004 and first half of 2005 fiscal years, with manufacturing-sector-dependent vending being the only exception.

The Morrison healthcare unit was boosted in January by the acquisition of HDS Services (#6 on the 2004 Top 50) and the winning of accounts like the Hospital of the University of Pennsylvania, the Medical Center of Central

Georgia and St. Francis Hospital in South Carolina. The Chartwells education unit (serving both colleges and K-12) debuted a series of new concepts including Bamboo Asian Cuisine, Mesquite Ranch BBQ & Grill, Sub Generation and Tuscan Oven. New education accounts in the past year and a half include Northern Kentucky University, Case Western Reserve University and the Chicago, Richmond and Newark public school systems.

The Eurest division unveiled Profiles 3, a new program that seeks to create a "third" destination for customers beside the home and the workplace, while the Flik unit added University Place at IUPUI (Indiana University-Purdue University of Indianapolis) and the University of Texas Hotel/

Conference Center to its client roster; the Levy Restaurants unit took over the Wrigley Field contract in Chicago.

With former North American division CEO Michel Landel slated to take over as CEO of Paris-based parent company Sodexho Alliance this month, Sodexho's North American division has been headed by CEO Richard Macedonia since the beginning of this year. Another new top executive is Michael Norris, who took over the company's B&I and vending unit as group president in May. Meanwhile, Sodexho spun off its Retail Brand Group early this year into a wholly-owned subsidiary that will seek to penetrate the wider commercial restaurant market with concepts such as Jazzman's Cafe and Pandinis, which it originally developed in-house for onsite environments.

Among new programs at Sodexho are Your Health Your Way, On the Go, which offers healthy options in the workplace dining environment; Total Patient Experience, a reworking of the way nonmedical services are delivered in hospital environments; and Healthy Habit Handcare for Kids, which encourages schoolchildren to exercise good personal hygiene to reduce school sick days.

Delaware North continues to emphasize organic and sustainable cuisine choices, staff diversity and environmental responsibility as part of its Project 21 initiative. One particular recent highlight was the organic options cart at July's Major League Baseball All-Star Game in Detroit. Meanwhile, the company's annual chef's summit last fall featured an emphasis on organic and local foods and ways to highlight them in dishes. Another initiative, GuestPath, seeks to benchmark customer satisfaction as part of a larger effort to brand DNC's guest service quality.

Centerplate is a leading provider of catering, concessions, merchandise and facility management services for sports facilities, convention centers and other entertainment venues. Its clients include six Major League Baseball and 10 NFL teams as well as 25 spring training and minor league baseball facilities, 34 convention and civic centers, as well as horse racing tracks, motor speedways, zoos and ski resorts. At the beginning of this year it named a new president, Janet Steinmeyer. The revenues listed above are for the calendar years. Sales through the first six months of 2005 were $289.25 million.

AVI remains primarily a vending and office coffee services provider. It operates its own commissary/bakery, where it prepares the sandwiches, salads, entrees, pastries and cookies offered in its vending machines. However, it has been concentrating on building its manual foodservice business in the past several years, which now generates an estimated $45 million in annual revenues. Onsite dining clients include the University of Toledo, Ohio State University-Lima, Beaver County (PA) Community College, Wayne State University, the University of Michigan Medical Center and FirstEnergy Corp.'s Davis-Besse Nuclear Power Plant.

Xanterra (known as Amfac until 2002) was formed in 1995 through the acquisition of TW Recreational Services, a business that traced its history back to 1905 when, as the Fred Harvey Co., it began managing concessions operations in Grand Canyon National Park. Today, Xanterra manages operations in a dozen national parks, including the Grand Canyon, Yellowstone, Mount Rushmore and the Everglades, as well as eight Ohio state parks, and freestanding resorts and conference centers like Silverado and Furnace Creek in California and Gideon Putnam Resort & Spa in Saratoga, NY. The operations include more than 60 restaurant outlets ranging from full-service to quickserve cafes.

Xanterra has aggressively touted its environmental stewardship and its commitment to sustainable and organic cuisine, becoming for example the first hospitality company to join the World Wildlife Fund. It has won a number of environmental achievement awards from the U.S. Interior Dept., the National Park Service, the EPA and the Travel Industry Association for its efforts.

In the past year and a half, Guckenheimer has implemented safe food handling and HACCP training systems; shifted its purchasing strategy to focus on organic, natural and hormone-free meats, poultry, produce and dairy products; and adjusted its recipe development strategy to offer more authentic scratch-prepared Asian, Indian and comfort food programs. The company manages dining operations in more than 400 locations, most of them higher-end business dining venues.

A public benefit corporation with no stockholders (after-tax income is either plowed back into the business or given out as loans and grants to tax-exempt organizations), Guest Services provides food and management services to hotels, resorts, senior living centers, colleges and the military—an area of particular recent emphasis—in addition to the segments listed above. A subsidiary, Lancaster Foods, wholesales fresh produce and flowers. About half of revenues are derived from dining operations.

The firm's most prominent recent initiative was the launch of a major rebranding effort complete with new company logo. Recent contract additions have included Big Sur Lodge at Pfeiffer Big Sur (CA) State Park, Herndon (VA) Harbor House Senior Center, the John & Mabel Ringling Museum of Art in Sarasota, FL, and the newly renovated food court at the Justice Dept. in Washington DC. Guest Services has also continued to convert each of its food court operations to encompass selected concepts from among the company's Choice Cuisine line of branded concepts. These now number 23 with the recent additions of Keep It Fresh (tossed to order salads made with organic vegetables and proteins) and O'Henry's Stew n' Boule (stews served in bread bowls with assorted toppings).

Though vending remains its primary focus, All Seasons is included on the Top 50 because of its substantial manual foodservice business (about $35 million). The company operates some 39,000 vending machines in more than 10,000 sites across the country. Last September it completed the latest in a long string of acquisitions when it purchased Anderson Paramount Food & Vending Services of Rochester, NY. In December it completed a joint venture deal with VTL Group USA to use VTL's real-time monitoring technology to keep track of its vending machines. Last month it reversed course on its acquisition strategy and sold off two OCS operations in Hartford, CT, and Burlington, VT.