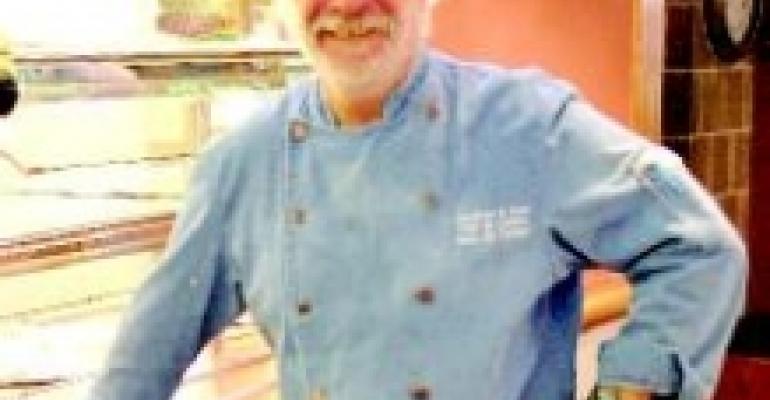 There are no second acts in American politics, goes the old saw. But apparently there are in music and cooking, because Jonathan Dorn is a living example.

Dorn had a long and highly satisfying career as a musician, touring the world and playing tuba in concert and recording sessions with artists like Leon Redbone, Jimmy Scott and David "Fathead" Newman.

Then he decided enough was enough, so he quit the music business and turned to his other lifetime passion, cooking. After working for a time in commercial restaurants, he secured a position in the dining services department of Villanova University, where he is now one of the chefs.

It couldn't be a better second act for the native of the Philadelphia area, who now lives and works only about 20 minutes from where he grew up.

How does someone who played on Leon Redbone albums wind up cooking at Villanova?
"I was in the music business for a little over 30 years and I had enough. I did everything that I dreamt of doing as a kid. I played with the Philadelphia Orchestra, became a studio musician, toured the world, played with a lot of stars, did shows. But I wanted a change. I'd always had a passion for food and cooking, so I worked at a bar/restaurant for a while, got some experience and then around 1990 a friend of mine told me there was an opening at Villanova. I started there as a general cafeteria worker."

Were you still doing music too?
"The Villanova job at the time was 6 a.m. to 3 p.m., so that left the night time available. I did that for a couple years. No more."

Where did the passion for food develop?
"I always liked to cook as a hobby. Even as a kid I remember liking the cooking shows they had on in the 50s. I also loved watching my mom and aunt. They were fantastic cooks."

What are you working on at Villanova?
"I'm doing a lot of research on the trendy ethnic foods, but also trying to go into other areas like foods from Ecuador and the Balkan countries, things you wouldn't normally think of getting on your menu. Also, for the Donahue Court operation where I work, I've developed about 40 gourmet pizzas, including Spaghetti & Meatball and Macaroni & Cheese, as well as dessert pizzas like Creme Broulet, Peanut Butter & Jelly and Strawberry Shortcake."

Boy, get you around a pizza oven and nothing's safe...
"A few years ago I developed this theory that almost anything can go on a pizza except chicken noodle soup, because the broth pours off..."

What do you like to eat?
"I love Indian, also Italian, Greek, Spanish, anything spicy. One of my hobbies is hot peppers and I make my own sauces, so I can take a lot of heat."

Is there a favorite dish you make at home?
"I make a killer chopped liver. It's my mother's recipe. You fry onions and livers with a little sherry wine and then add a little mayonnaise before putting them in the processor to make them creamier."

Do you keep up with the jazz music scene?
"Jazz and classical. I started as a classical musician, but I love all kinds of music. A good musician should be able to play any form at the drop of a hat."

So you started in classical. How did you get into the other forms?
"I got into nightclub and banjo band work and then Dixieland bands and recording studio work."

Is that how you met Redbone?
"I met him in the studio and played on his first album. After that he asked me to join him on the road in concerts. We played Saturday Night Live four times in the 70s."

That was the classic era. Did you meet the cast—John Belushi, Bill Murray and the rest?
"Sure, there would be a private party after the show with the whole cast at a local restaurant in New York. It would go on until the sun came up."

Were those your most memorable concert experiences?
"I don't know, I've worked with a lot of singers—Mel Torme, Henry Mancini, Tony Bennet, Bette Midler. They were all memorable experiences."

Are you still involved in the music scene?
"I keep in touch with tuba players all over the world through e-mail and we pass things back and forth to keep tuba alive. Many actually remember me from my playing days, and I am always happy to give out advice. One player from Canada e-mailed me recently because he wants to include me in a celebrity tuba players calendar for 2007. I can't wait to see it just to see who else is in it."

Do you do any hands-on teaching?
"Right now I don't have time but after I retire, I'd like to get involved in coaching and maybe even do a little playing again And I want to finish my book on the tuba."