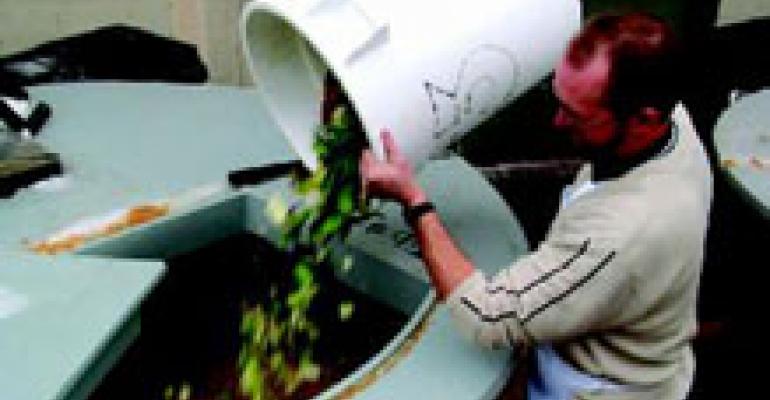 Waste Is a Terrible Thing to Mind

...but some operators are succeeding with a variety of recycling strategies

They look like quirky dumpsters sitting in a fenced-in area behind the Emma B. Lommasson Center on the campus of the University of Montana in Missoula. Indeed, kitchen employees regularly march out and dump food scraps in them..

However, the two units are not conventional dumpsters but “Earth tubs,” plastic recycling machines that produce rich compost for the university's landscapers from a pungent mix of food scraps and wood shavings. The tubs have helped UM Dining services not only reduce food waste going into conventional trash removal channels but have also given it a “green” cache with environmentally conscious students and faculty.

UM Dining is hardly the only onsite foodservice operation to adopt recycling. With environmental awareness of increasing concern, and with waste removal costs escalating, the logic for exploring recycling has never been more compelling. Often, though, the recycling takes place off-site, away from kitchens and dining rooms where the waste is generated.

“The younger kids, especially, think it's neat,” says FSD Kathy Jorgenson. “It makes them feel they are doing something important for the environment.”

At Cornell University in Ithaca, NY, a comprehensive campuswide composting program encompasses the whole campus and not just the Dining Services Department. The program is considered so important that new dining units must include temperature-controlled waste pick-up areas in their designs (the university's composting site picks up scraps at each unit location). “They pick up regularly during the week, but over weekends, especially in warm weather, you don't want the scraps just sitting out,” explains Dining Projects Director Paula Amols.

At the University of Vermont in Burlington, food waste is collected from five campus locations every weekday and taken to a nearby composting site run by a non-profit business about a mile from campus. Food scraps, plate scrapings and paper napkins are all collected in carts marked “Food Waste Only” before trays go to the dishroom. Scraps are also collected by kitchen personnel during food prep.

Some schools have found more picturesque ways to deal with organic trash.

At Carlton Palmore Elementary School in Lakeland, FL, the uneaten lunch scraps left by students are destined to wind up not with a composter but as food for “Hubert the pig.” Hubert— actually a collective name for a herd of swine living at a nearby farm—has been getting Carlton Palmore's lunch scraps for 10 years. Their owner, part-time farmer Richard Allen, picks up the lunch scraps every day.

It's the remnant of an earlier time when schools would contract with farmers in “swill programs.” Most such relationships have faded away, victims of increased urbanization, administrative red tape, health codes (food left out but not picked up tends to attract vermin) and changing school feeding strategies. A new “offer versus serve” approach that emphasizes choice and portion control in the cafeteria has generated less food waste at Carlton Palmore than before. That reduces the incentive for a farmer to make the trip to pick up the scraps. So the 72-year-old Allen is one of the few left with the time and inclination to do so.

However, his relationship with the school does provide it with a compelling connection to the land and the closing of the “ energy cycle”—the idea that recycling returns the energy used to produce food back to the land, to be used to produce more food.

As for the children at Carlton Palmore, “Hubert's” food preferences are a subject of endless speculation.
—Mike Buzalka

The dining services department at the University of Maryland thought they were doing a fun but responsible thing when they served a popular nonalcoholic beer with a “Louisiana Night” theme dinner of crawfish, corn-on-the-cob and potatoes in the school's dining halls recently (the leftover bottles were sold with the following day's dinner).

A campus newspaper sought to expose the practice as a violation of liquor laws, suggesting that not even non-alcoholic beer could be served to underage patrons. It turned out that the paper was not only the only party worked up over the incident, but was worked up over nothing.

According to the Prince George's County Board of Liquor Commissioners, non-alcoholic beverages do not require proof-ofage “carding,” though some businesses—especially bars located near college campuses— may do so as a matter of convenience and company policy.

As for the “Louisiana Night” dinner, “the students loved it,” says FSD Pat Higgins. So did the administration. “The provost told me afterward, ‘This is a great idea and you should do it more often!'” Higgins adds.

The National Restaurant Association (NRA) and its Educational Foundation hosted its annual Salute to Excellence awards banquet the Saturday preceding its national show in Chicago last month. The event highlights contributions to restaurant, foodservice and culinary education and honors hundreds of culinary student delegates annually. It also recognizes key industry leaders via its Dipolmate and other awards programs.

NRAEF inducted Helen Doherty, director of nutrition & foodservice for Massachusetts General Hospital, this year. In her acceptance, Doherty told the audience that “The key to excellence is doing the right thing when nobody is looking.” She also reminded the group that as the first employer of many immigrants to the U.S., “we have a special responsibility to teach them to have pride in their jobs, their work ethic and their new country.”

Other recipients of the Diplomate award included Frederick Dame, fine wine director for Allied Domecq Wines USA and International Food Safety Council President John Farquharson. The Thad and Alice Eure Ambassador of Hospitality Award for outstanding achievement, leadership and contributions to foodservice educationwent to former NRA president and Marriott Corp. Chairman Dick Marriott, who observed, “My father always used to say, ‘We are not in the food business, serving people; we are in the people business, serving food.”

Almost 40 percent of the 42,000 students in the St. Paul (MN) Public School District are Hmong, members of a Southeast Asian ethnic group that migrated to the Twin Cities in the 1970s following the end of the Vietnam War.

Adapted from recipes submitted by parents to conform with federal nutritional requirements for reimbursable meals, the dishes have been a hit so far, says District Nutrition Services Director Jean Ronnei. "We didn't introduce the meals to increase participation so much as to add excitement and something different," she says.

In addition to the Hmong dishes like Beef Fried Rice (see recipe) and Sweet & Sour Chicken, St. Paul Schools has served Mexicanstyle rice and pinto beans. Next up will be Somali dishes to reflect that African immigrant group's place in the district's diverse populationmix.

Ronnei says the biggest challenges in adapting ethnic dishes are not so much the kids' tastes as the restrictions imposed by a mass production operation with limited types of equipment. She credits Ramsey County Public Health Dept. Nutrition Program Manager Jerry Soechting with helping make the program a reality by finding cooks in the ethnic communities who helped develop the menu items.

California Gov. Arnold Schwarzenegger, some Republican state lawmakers and school officials have called for the repeal of a law passed two years ago that limits the ability of school districts to outsource functions like foodservice. The law's defenders, including many Democrats and the California School Employees Association, counter that it only prevents districts from saving money simply by cutting worker salaries.

The issue has become central to a battle between the governor and legislature over his appointment of Jeannine Martineau to the state Board of Education. Martineau, who chairs the coalition trying to repeal the bill, must be confirmed before next January by the state senate to sit on the Board. No hearing have been scheduled so far.

The dining services department at the University of North Dakota in Grand Forks had never served a million meals in a single year in its history. The record was around 930,000, set last year.

But that changed shortly before the end of the recent spring semester—at exactly 5:45 p.m. on Tuesday, May 4. That's when Brenton Smith stepped through the checkout line...and into UND Dining services history.

To mark the “millionth meal” occasion, Smith was presented with a DVD player, 19-inch flatscreen TV, $200 added to his campus dining account and various other tidbits like gift certificates and apparel.

Like most hospital foodserviceoperations, Grant Central-Station can use every retail dollar it can get. To that end, the cafè, located in Grant Medical Center in a busy section near downtown Columbus, has been offering nearby workers and residents a 10-percent discount. The program helps add several hundred customers to the cafè's more than 2,000 daily patron total.

The discount program is nominal. In fact, users no longer even need identification. A verbal request is sufficient in most cases, says General Manager Joe Brown of management company Aramark Healthcare Services, which runs Grant's foodservice operations. “In most cases, we already know who they are anyway,” he says. As for giving a discount to any customer who asks, Brown says the point is to draw more patrons and increase word-of-mouth about the cafè as a lunch alternative.

The cafè offers a choice of three entrees plus a soup and a grill specialty every day, along with a salad bar and a grab-and-go salad of the week, such as Cobb, chef or chicken Caesar.

St. Xavier University on Chicago's Southwest side is a largely commuter school with an enrollment of about 5,600 students, almost half of them graduate students. Until recently, the campus had little in the way of gathering places, especially in the evening.

But that is about to change, thanks to a donor who isn't even a graduate of the 158-year-old independent Catholic institution. Richard Driehaus grew up in the neighborhood around St. Xavier but never attended (actually, he is a graduate of DePaul, a rival Catholic university in Chicago).

However, the highly successful investor has presented the university with a substantial donation: the deed to a block-long strip mall located across the street from the campus. Among the strip mall tenants is a local institution, Gilhooley's Grande Saloon, an Irish-themed pub.

Gilhooley's will remain open following transfer of ownership and will be run by the school's foodservice provider, Chartwells Dining Services, as a retail venue for students old enough to drink alcohol. It may also be incorporated into a new hospitality program St. Xavier is considering.

The rest of the strip mall will be taken over and used for campus expansion, says university president Judith Dwyer.

There's nothing new about serving pizza to hospital patients, of course. However, Aramark Corp. thinks it has made a dramatic leap in quality with the introduction of its “Pizza for Patients” program, which it is launching in conjunction with manufacturer partner Schwan's Food Service.

Patients can choose from a variety of traditional toppings— pepperoni, sausage, vegetable— depending on diet restrictions. A bacon-and-egg breakfast pizza is also available and guaranteed to be delivered in 30 minutes or less from time of order.

Pizzas are kept warm during transport using techniques similar to what commercial pizza delivery drivers use.

The team created cookie-making kits that, along with basic information about the university meal plan, include a bag of cookie mix, icing, sprinkles and an H-shaped cookie cutter.Now, students can make tasty, alma mater-inspired treats at home.

"We wanted to express a sense of home and warmth to the students and we thought, ‘what better expresses that than cookies?'" says Christa Martin, Harvard Dining Services.

Surprisingly the kits cost less to produce than some of the more traditional, four-color, bound brochures the department had created for past promotions, says Martin.

For its “out of the box” thinking, Dining Services was awarded the 2004 International Gold Quill Award from the International Association of Business Communications, sponsored by Mercer Human Resource Consulting.

The cookie kit also got rave reviews from its recipients. “The students thought the kits were a lot of fun,”says Martin. “With all of the information they receive from Harvard, many said it was nice to receive something that was warm and friendly.”