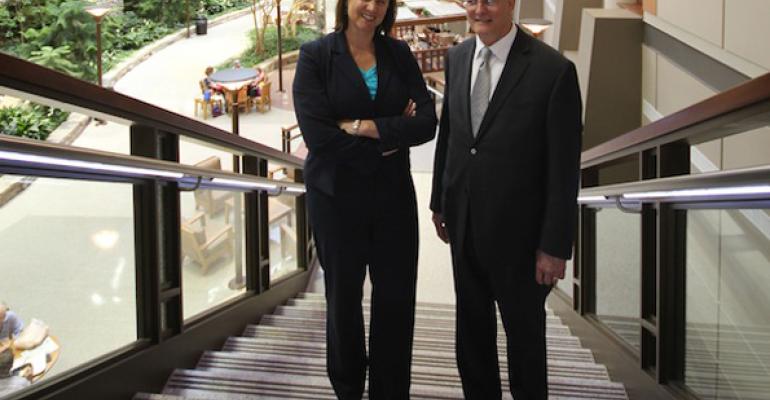 Henry Ford Health System commits to an ambitious and comprehensive program become a provider of wellness services and programs for the communities it serves.

Just a few years ago, Henry Ford Health System was a fairly typical hospital network centered around a main urban campus and focused on treating the sick. Its dining operations were outsourced and provided a basic food service program for patients, staff and visitors by way of fairly typical operations.

Today, the system is in the midst of a highly ambitious strategic transformation. It’s one that Henry Ford’s top administrators believe will position it to succeed and thrive in a future healthcare environment they see as quite different from the one that exists today.

That new environment, driven by financial, regulatory, demographic and cultural factors, is expected to shift the role of healthcare providers from the traditional model of caring for the unhealthy to encouraging the healthy to adopt habits and lifestyles that help them stay that way. Henry Ford is determined to be an industry pioneer in this emerging era.

While excellence in clinical areas remains a priority, of course, Henry Ford is making a strategic move to embrace what it calls its Henry Ford LiveWell model. Henry Ford LiveWell requires the system hospitals and outlets to embrace an educational approach to their relationships with not only patients and their families but also with staff, visitors and the community at large.

“The whole Henry Ford system is strategically focused on integrating a wellness approach throughout its operations,” says Bethany Thayer, director of Henry Ford’s Center for Health Promotion and Disease Prevention. Thayer reports directly to the Henry Ford Health System’s Chief Wellness Officer, Kimberleydawn Wisdom, MD (a former surgeon general for the state of Michigan). “It is in our vision statement and part of the strategic planning for the new center of excellence on wellness that we launched in 2012.”

The transformation has extended to foodservices, with dining operations now self-operated and set to serve an expanded mission that supports Henry Ford’s commitment to becoming a model for the healthcare system of the future.

“We decided to bring dining operations in house from outside management because food is a critical component of wellness and we wanted to own our brand so we could make that connection in customers’ minds,” explains John Miller, system director of Culinary Wellness, who oversees dining across the Henry Ford system and works closely with Thayer. “The food we serve in our cafes and to patients reflects our system’s health and wellness philosophy.”

Obviously, Henry Ford is not the only healthcare organization to look to this path, but it’s fair to say that none have plunged so deeply into it with such significant institutional commitments to resource utilization.

The largest commitment made by the Henry Ford system to the Henry Ford LiveWell approach can be seen at Henry Ford West Bloomfield Hospital, which opened in 2009 and was designed from the ground up to embrace the new approach. It is the first new hospital added by the Henry Ford Health System since its founding in 1915, when its flagship Henry Ford Hospital opened in downtown Detroit. The system has five other hospitals.

The 730,000-sq.ft., $360 million Henry Ford West Bloomfield Hospital currently has 192 beds, all in private rooms with windows that face an adjacent pond and the surrounding woods. It has a staff of some 2,300, including 500 physicians.

The design, resembling a Northern Michigan lodge and featuring local materials, incorporates cutting edge technologies that promote wellness and emphasize sustainability. The LEED Silver facility sits on 160 acres of wetlands and woodlands with walking trails. It features a rooftop garden and energy-efficient climate control systems, windows and equipment. There is even a hydroponic organic greenhouse out back.

The most dramatic design aspects are a spacious retail corridor and soaring atrium on the first floor. The former, branching off from the main entrance, boasts a series of shops ranging from the hospital’s pharmacy to a shop selling specialty healthcare products and healthy lifestyle goods and a branded Caribou Coffee shop.
Also situated on the retail corridor are a fully equipped, state-of-the-art demonstration kitchen and Vita, a wellness center that offers programs ranging from yoga classes and massage services to alternative medicine services like acupuncture.

“Studies have shown that more patients also are seeking out integrative medicine, but many don’t tell their doctor they’re doing it,” explains Nabil Khoury, MD, interim chief medical officer. “Each therapy offered at Vita—both traditional and integrative—has been carefully evaluated by a scientific advisory panel to ensure its safety and effectiveness.”

The 90-seat Demonstration Kitchen conducts regular cooking classes—with a health and wellness emphasis. It also serves as an educational tool for patients, who can watch the sessions from their room TVs through a closed circuit hookup.

There are also culinary classes geared to helping employees to hone their cooking skills. “We want to develop a culture of emotionally engaged employees,” says Miller. “We also look for people with a talent for compassionate care.”

Meanwhile, the atrium, towering three stories high and flooded with natural light from three skylights during the day, features a green roof with some 20,000 plants that absorbs rainwater and helps cool the building. Inside, it has over 2,000 more live plants lined along its cobblestoned paths as part of its design to provide a peaceful space for relaxation and contemplation. Refreshments are available in the atrium from a kiosk stand featuring products from local purveyor Great Lakes Tea & Spice. As an additional special touch, a traditional high tea is served in the atrium every afternoon.

In the patient rooms, the various design aspects, from how the furniture is arranged to what color schemes are used, are the result of extensive consumer research with several thousand participants giving their input. Every room has a sleeper sofa and recliner for family members who want to stay overnight (there are also family rooms with beds, tables and kitchen facilities on each floor for more extended stays), as well as wireless internet service and flat-screen TVs with on-demand programming. The patient rooms also have no shared walls in order to maximize noise reduction.

In between the atrium and the retail corridor sits Henry’s Café, the facility’s primary retail dining outlet. Henry’s serves as the model for retail dining that the system strives for across all its facilities. There is no deep fat frying, sodium levels are minimized, and most dishes emphasize selections utilizing plenty of fresh produce—including organics from local sources where possible—and lean meats, all served in appropriate portion sizes.

Patient dining at all Henry Ford hospitals uses a room service model. The menu, like the Henry’s Café menu, emphasizes healthy choices made with fresh ingredients—local and/or organic where possible or practical. The recipe database, consisting of some 3,000 separate formulations incorporating kosher, halal, gluten-free and other specialty selections, was designed with the help of local chef Matt Prentice.

Because dining at the various Henry Ford facilities had until recently been managed by various outside contractors, there was little integration among them. That has been changing since the last contract expired and was brought in-house in early 2012.

On the retail side, that connection is made through a set of criteria developed by the Culinary Wellness team that is designed to support the wellness mission of the larger institution. They include abandoning the deep-fat fryers, reducing sodium content in foods, eliminating trans fats and establishing a target goal of 650 calories for entrée item servings. The Culinary Wellness team also pledged itself to purchasing locally and working with local vendors.

In the first year, the new approach removed some six tons of fat from the food served over that time. It also saved money. Removing the shortening saved some $28,000 alone.

It is a major commitment that was cemented in place when Henry Ford signed on to the Partnership for a Healthier America Hospital Healthier Food Commitment. Henry Ford is one of only 17 hospital systems across the nation, and the only one in Michigan, to sign the pledge, which ties it to a rigorous third-party certification regimen covering areas such as fruit and vegetable procurement, menu content, food preparation techniques and merchandising/marketing.

Miller had no reluctance in making such a commitment, confident that he and his staff could make the new healthier menu approach just as, if not more, attractive to diners. “No one can convince me that, given a chance, you can’t offer healthful options to people that don’t have the flavor to make them just as desirable as what they replace.”

He cites one prominent example: “We had fried chicken every week and it was our top seller,” he recalls. “When we began removing the fryers one hospital at a time, we had to deal with removing that item from the menu. Yes, there was a short-term falloff. But in the end our substitute, a panko breaded chicken, was even more popular because we had created a new market among those who were looking for healthier alternatives and had previously avoided the cafeteria. We actually ended up exceeding previous sales levels by about 10 percent.”

For the most part, though, Miller prefers to be sneaky about serving more healthful menus. “I worked in restaurants for many years and learned the lesson early in my career that you don’t have to advertise the fact that something is ‘healthy.’”

As an example he cites a Henry Ford café that had been sampling a high-quality wrap sandwich with a very healthful profile without disclosing that aspect. “Sales were going through the roof until we let it slip to one person and sales then fell off as the word got around,” Miller says.

As a consequence, healthful choices are pushed through merchandising strategies that use product placement and merchandising approaches that encourage making “the right choice.”