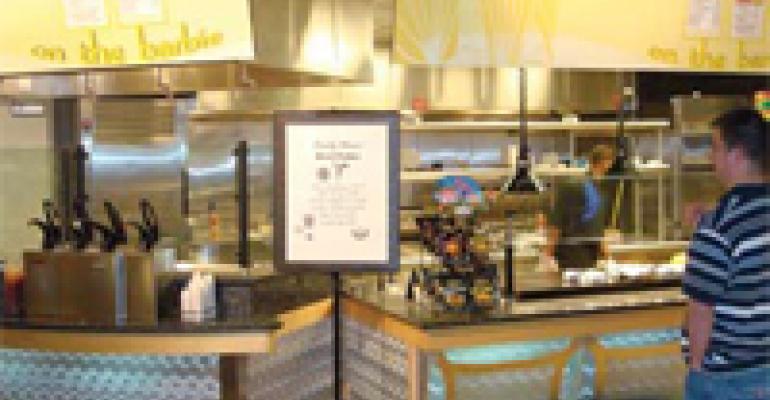 At Wright State University in Dayton, OH, the On the Barbie grill station of the school’s Union Market food court features the Rowdy Menu, a set of 99-cent menu choices (plus a $1.09 cheeseburger) ranging from a burger, hot dog and chicken sandwich to a five-piece chicken nugget plate and fries.

The Rowdy Menu is a standard part of On the Barbie’s offerings (which consist primarily of higher-priced grilled items), not a short-term special. It was introduced almost a year ago and there are no plans to remove it, says Chuck Porter, resident district manager for Sodexho, which operates the Union Market.

Porter says the Rowdy Menu does not detract from sales at the other stations (or On the Barbie, for that matter). Rather, it seems to help attract students who are especially budget conscious or who simply want a minimal amount of food, thus helping boost overall customer counts.

Nor do the low-priced offerings seem to be taking over the food court. Currently, the Rowdy Menu accounts for only about a fifth of On the Barbie’s total sales, and well under 10 percent of the food court’s total.