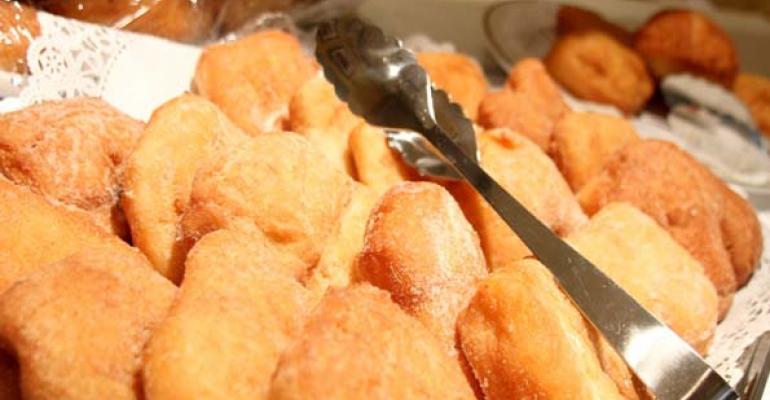 Fasnacht-from-scratch at Messiah Lifeways pushed the bake shop to the limits.

Fasnacht are fried doughnuts with a purpose: celebrating the beginning of Lent, when Catholics fast for 40 days. The name comes from the German words “fast” and “night,” meaning the night before Lent, or Carnival. These doughnuts, traditionally meant to use up lard, sugar, fat and butter, are a sweet tradition for the Pennsylvania Dutch community in the surrounding areas of Lancaster, PA.

“Our residents know these doughnuts and absolutely love them,” says Franklin Oiler, RD, LDN, general manager of Dining with Cura Hospitality at Messiah Lifeways, a CCRC in Mechanicsburg, PA. “This is what they grew up with…they had these at their grandma’s house.”

The idea to make almost 50 dozen fasnacht came from Amey Cejas, pastry chef at Messiah Lifeways, and a contestant on Cupcake Wars on the Food Network. She worked together with Executive Chef Lindsey Pletcher to strategize the baking of 13 huge batches of the doughnuts. It required improvisation.

“We don’t have the fryer space, so we had to use tilt-skillets,” Pletcher says. “We coordinated with the early morning kitchen staff on the breakfast menu for that day to make sure we’d have access to the skillets.

It quickly became an early-morning race against time, a choreographed bakery flurry of rolling, cutting and frying that started at 1:30 a.m. Keeping an eye on the yeast activity was key while the fasnacht were in the proof boxes.

“The dough was proofing before we could fry them, and we were frying them 60 at a time,” Cejas says. “Out of 13 batches, only one had yeast that died. It was definitely an adventure.”

The baking adventure produced enough fasnacht for more than 370 residents, who were reportedly thrilled with the Carnival treat from the old days. The baking team had planned to sell the fasnacht for both breakfast and lunch, but, “they cleaned us out before breakfast was over,” Oiler says.

Cejas took notes and learned from missteps, so the process can be repeated more seamlessly next year. Although it was tough, the fasnacht experiment was worth it, she says: “It was a labor of love.”

1. Boil and mash 1 cup of potatoes. Scald milk and add it to the mashed potatoes in a mixing bowl. Add 1/2 cup sugar and 1 stick of margarine. Mix well and cool to room temperature.

2. Dissolve yeast and 1/2 teaspoon sugar in luke-warm water. Mix the yeast and potato mixture together.  Combine 2 cups of flour and mix well.  Cover with a towel and place in a warm area for 30 minutes.

3. Beat the egg and add the salt then add to the potato/yeast mix.  Add about 5 cups of flour to the mix making sure it is to work it through the mixture as it is added.  Knead the dough while adding flour until the dough is not sticky.  Place in a large greased bowl and cover with a towel.  Allow the dough to rise for about 2 hours or until it has doubled in size.

4. Roll dough to ¾” thickness and then use a pizza cutter or a knife to cut the dough into 3” x 3” squares. Place on greased trays so they are about 2” apart and cover the tray with a towel.  Let the squares rise for about an hour or until they have doubled in size.

5. In a skillet, heat the shortening to 375 degrees.  Deep fry the fastnacht until golden brown then turn it over and continue frying until the other side has turned brown.  Drain on paper towels to remove excess oil.  Roll in a mixture of cinnamon and sugar and serve.