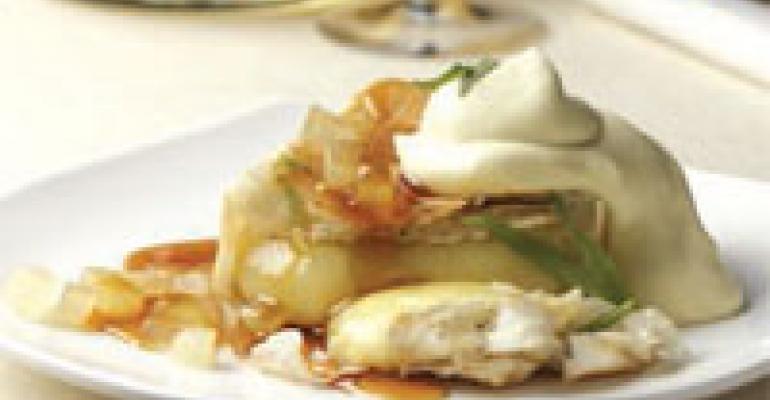 1. Warm butter until melted and the fat begins to separate from the milk solids.

2. Chill the cheese well before using and keep chilled while cutting. One wheel will yield approximately 6 equal squares refrigerating till later use.

4. Cover one phyllo sheet with the melted butter fat using a pastry brush and grind some fresh pepper over the butter. Lay a second sheet on top and repeat with the butter. A total of 6 sheets doubled when cut in halves will cover 6 portions.

5. Place a cheese square in the center of the halved phyllo sheets and completely seal, using more butter, if needed. Refrigerate till ready to cook. Be sure to cover with plastic wrap when in the refrigerator.

6. Place water into a mixing bowl and squeeze the juice of one lemon into the water. Peel 2 apples and hold in the lemon water. Cut each apple into a small dice and place into the lemon water.

7. In a small sauce pot, place the vinegar, sugar and cinnamon stick and cook over medium heat till a syrup forms. Strain the diced apples and add to syrup mixture.

8. When the apples become translucent and syrup clings well, remove from heat and reserve this Apple Compote until ready to use. Be sure to remove the cinnamon stick before serving.

9. Whip the cream until stiff and set aside refrigerated. Place the egg yolks, honey and mead into a metal bowl and place over a hot water bath, whipping continuously until the mixture is thick and frothy. Remove from the water bath and place over ice, stirring until cold. Fold in the whipped cream and place this Sabayon in the refrigerator. Do not hold for more than 2 hours as the mixture will begin to deflate.

Photo and recipe: National Honey Board