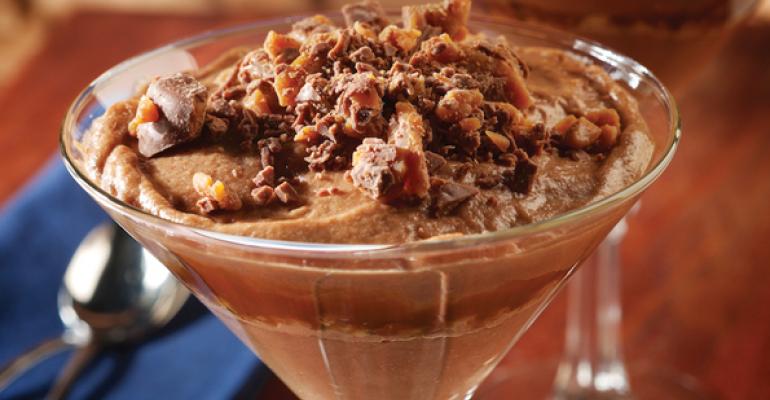 1. For the sauce: in a wide saucepan or skillet, melt the butter with brown sugar and ¼ cup heavy cream, stirring until smooth.

2. Without stirring, let the mixture cook at a bubbling simmer for 3 minutes.

3. Remove from heat; stir in remaining 6 Tbsps. of cream. Cool briefly; stir in the vanilla extract. Set aside.

4. For the filling: Combine chopped milk chocolate and heavy cream in a glass bowl; place over a pan of gently simmering water, making sure the water doesn’t touch the base of the bowl. Stir occasionally, until chocolate has melted and mixture is smooth. Cool briefly.

5. In the bowl of an electric mixer, or by hand, beat the egg whites with a pinch of salt until they begin to get stiff. Beat in half of the sugar until stiff. Scrape the egg white mixture into a small bowl.

6. In a clean bowl, beat the egg yolks with the remaining sugar until stiff and light-colored, about 3 minutes. Scrape down sides if using a standing mixer).

7. By hand, beat in the mascarpone with a spatula or whisk, until mixture is lump free. Fold in half beaten egg whites; add remaining half and fold, just until fully incorporated. Gently fold in the melted milk chocolate mixture until completely blended.

9. To assemble: Portion a spoonful of the mascarpone cream into each stemmed glass; top each with a layer of trimmed cookies and a layer of butterscotch sauce. Repeat process for each dessert, ending with the mascarpone mixture on top. Cover and refrigerate at least four hours, but preferably overnight.