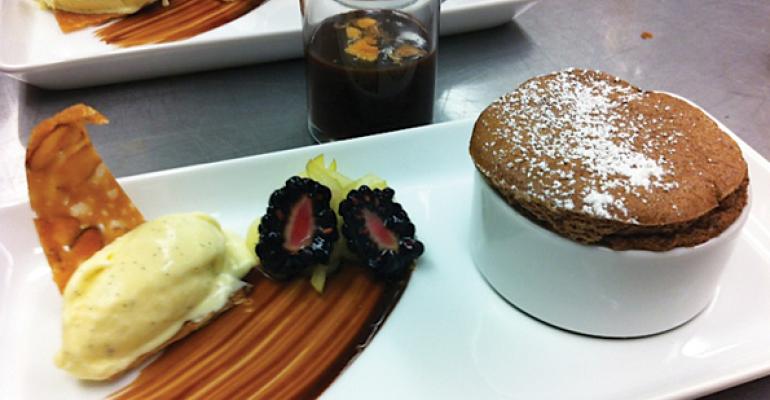 Retro Desserts Get a Modern Spin

Whether you make banana pudding by the book or turn a s&rsquo;more into something much more, retro favorites have a way of making everyone feel at home.

Chefs go back to the future with time traveling treats like banana pudding, souffles and s'mores.

Whether you make banana pudding by the book or turn a s’more into something much more, retro favorites have a way of making everyone feel at home.

“We offer a lot of fancy, seasonal desserts, but when it comes down to it, for a special event, people want something they associate with family celebrations of the past,” says Julie Stewart, foodservice manager at SAS, a computer software company in Cary, NC. Her customers’ love of old Southern favorite desserts—like sour cream pound cake and pineapple upside down cake—runs deep and several appear in the four full-service cafeterias on an everyday basis.

“When I think about growing up, desserts were special but never complicated,” says Ryan Conklin, CEC, executive chef at Rex Health Care. He likes to use the venerable dessert Bananas Foster to recreate that same special feeling.

“A Bananas Foster station is great to have at a catered event or in your café at a cook-to-order station,” Conklin says, adding that it’s a surefire conversation starter. “Retro desserts are fun, and usually have a backstory or two.”

While there is much to be said about flawlessly recreating something straight out of your grandma’s recipe book, sometimes a slight shift in ingredients—just one or two unexpected flavor notes—can take a dessert from simply retro to really interesting.

A new old fashioned bakery with a past

In rural areas in the last century, gristmills served as  gathering places for the community.  North Carolina State University Dining took note of this country lore and turned it into a great branding idea for a new bakery inside a c-store, part of a student center renovation and addition, slated to open this fall.

The Yates Mill Bakery at NC State is named for the local Yates Mill, which served Wake County as a water-powered mill for more than 200 years. Right now it’s the only one of the county’s 70 gristmills still in operating condition.

The story of the mill is prominent on specially designed cupcake boxes, stickers, ribbons and signage. A drawing of the rustic old mill on the packaging completes the marketing plan.

The bakery has plans to serve tarts, cakes, cupcakes, candies, granola, trail mix, cookies and more, says Randy Lait, senior director of hospitality services. The baking team, headed up by Pastry Chef Kelly Bellmore, has been fine-tuning and testing recipes over the past few months.

There are also a good amount of treats that reflect a modern-day focus on special diets and alternative, natural sweeteners, Bellmore says.

“At home, I prefer to keep refined sugar out of my diet,” she says. “I enjoy baking using natural sweeteners such as fruit and honey.” She also experiments with recipes made without eggs and refined flours. Some of the results of her experiments include gluten-free macaroons, crustless cheesecake and granola with no refined sugar.

This is bananas... a key retro ingredient

NC State isn't the only place using bananas as the starting point for a little time travel to the sweet days gone by.

Bananas Foster makes many cameos at Rex Healthcare, something familiar and exciting at the same time. It's a beloved dessert that originated in the bourbon-soaked streets of The Big Easy in the 1950s.

“I love this classic because New Orleans is such a food town, and this is one of its most famous desserts,” Conklin says. Rex Healthcare chefs make the classic dessert pretty much to the letter.

Conklin’s recipe is true to the classic, beginning with brown sugar, cinnamon, liquor and butter in a hot pan until it begins to foam (and smell incredible). At this point, Conklin adds bananas, sliced thick and heated until they’re golden brown.

“This is very important,” Conklin says, “you want to treat the bananas like gold. Don’t toss them around so much that they break up.” Now, rum is added and the drama of the old fashioned dessert really ignites. Spooned over good ice cream, this is a classic well worth remembering. The only modern-ish ‘twist’ applied is serving the dessert in a martini or pilsner glass.

While NC State changed up the concept, SAS keeps it home-spun. Classic banana pudding, in styles both plain and fancy, is a sweet best-seller at SAS, Stewart says. At a recent new product release party—a “pig pickin’” with a whole-pig barbecue—Stewart’s crew filled big sheet pans with banana pudding (complete with vanilla wafers). It was kept cool in a chafer and then doled out onto plates.

“There are at least two classic recipes for Banana Pudding: The first, we top with whipped cream; but I remember my grandmother going all out and topping it with meringue. If we really like you, you get the meringue,” Stewart says with a chuckle.

Sock it to Me Cake

On her blog, Southern Fairytale, Rachel Matthews describes the “beautiful, buttery, cinnamon and brown sugar filled Southern Classic—Sock It To Me Cake” as a part of her family legacy.

“I love passing family recipes on to my kids,” she writes. “watching their eyes take in tattered and stained recipe cards, the smells the same ones that I remember from my own childhood.”

Jacqueline Crider, executive chef, Parkhurst Dining, Wheeling Jesuit University, Wheeling, WV, has placed Sock It To Me Cake on the dessert menu, and also developed a Southern-inspired cupcake that’s based on a favorite libation: Mint Julep Cupcakes. It’s the perfect fusion of the cupcake craze and the mixologist trend, another example of blending the old and the new in a delicious way.