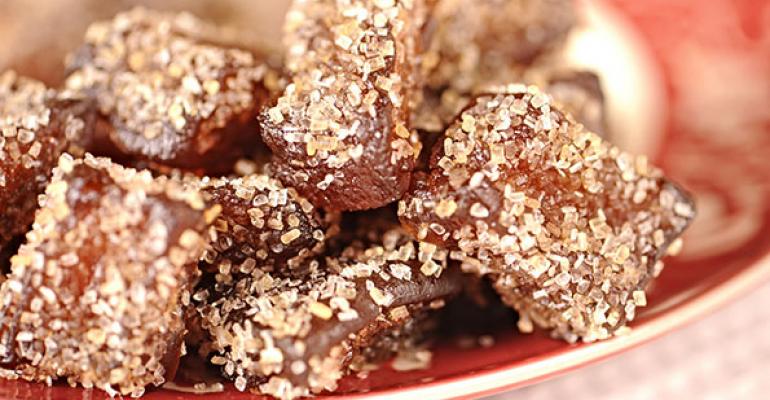 <p>A SWEET TIME TO BE VEGAN: Desserts that contain no dairy or eggs are not just possible&mdash;they&rsquo;re dynamite.</p>
Food & Beverage

GALLERY: 7 Sinfully Good Vegan Desserts &gt;&gt; Vegan desserts, like baked goods and frozen delights, are becoming less of an afterthought and more of a grand finale.

No butter, No problem. Vegan desserts are satisfying the dessert cravings of die-hard vegans, carnivores and everyone in between. By either seeking out recipes that are naturally vegan or branching out into finding the right substitutes for dairy products, there are more ideas out there than may meet the eye.

“There are many excellent vegan desserts in the world that can go head-to-head with any non-vegan dessert,” says Elliott Prag, instructor/curriculum development manager at the Natural Gourmet Institute in New York City. “To me, a great vegan dessert has all the attributes of a great non-vegan dessert: richness, delicate texture, good mouth feel, vibrant flavor…all of these things are achievable when you understand the science and technique of vegan baking.”

While working with desserts that traditionally feature eggs, cream and butter can be a challenge, with the use of the right substitutes, such desserts can earn a place on the menu as a great dessert, period.

“While eggs and butter can do some amazing things, there are a lot of great things you can do without them,” Prag says. “I definitely have vegan recipes that I don’t feel the need to add the qualifier, ‘Oh, this is vegan.’ People say to me, ‘Really? This is vegan?’”

Not a Half-baked Idea
At Oberlin College in Ohio, vegan eating is taken very seriously. This year, the Bon Appétit-run dining operation was recognized by peta2 as the Favorite Vegan-friendly College in the nation, tied with Stanford University. Plenty of vegan options—main dishes, sides and sweets—can be found every day at the two main dining locations and other grab-and-go spots around campus.

The on-campus bake shop is the backbone of vegan dessert offerings at the two main dining halls at Oberlin, according to John Klancar, director of operations. He’s especially proud of the recently added vegan pumpkin bars (pictured, lower left) and also the big selection of vegan cookies.

The Butter Challenge
A tricky part of vegan baking stems from the things that butter can do from a scientific standpoint. Butter produces a lighter product than vegan fats because it contains water. When butter melts during baking, that water turns into steam and lightens the product’s texture, Prag explains.

“Butter’s flavor is also difficult to replace,” he adds. “Often the removal of butter in a vegan recipe takes a lot of the dessert’s character with it.”

There are vegan margarine products on the market, which often work well, and vegetable oil, flax oil, coconut oil, avocado, applesauce and even prune purée can work as substitutes.

At the University of North Texas in Denton, the all-vegan dining hall, Mean Greens, features a good variety of vegan desserts. For the most part, these desserts “are already vegan to begin with,” says Bill Hunter, CMB, executive pastry chef.

In pursuit of the ultimate vegan brownie recipe, the bake shop has been fine-tuning many different combinations of substitutes in a trial-and-error process. Hunter is using a recipe he developed when he worked at a five-star hotel as a jumping-off point.

“We replaced the eggs with part flax meal, part soy flour, part coconut oil and part water,” Hunter says. “The taste is great, and we’re fine-tuning the water level and bake time and temperature to get the desired texture.”

The baking team also found that adding a small amount of baking powder helps replace the air that the eggs would have held.

Overall, Hunter’s advice on finding the right substitutions in vegan baking is to “go slow,” he says. “There is  quite a learning curve.”

Prag isn’t the only one getting into vegan ice cream. At Oberlin, student demand led to the addition of Vegan Lemon Sorbet to the ice cream self-serve area, says Eric Pecherkiewicz, MS, RDN, LD, dietitian/marketing manager.

Is Honey Vegan?
This is a debate that has been raging for decades among vegans. “You’ll never find a self-respecting vegan downing a glass of milk or munching on a slice of buttered toast,” writes Slate columnist Daniel Engber. “But the modern adherent may be a little more accommodating when it comes to the dairy of the insect world: he may have relaxed his principles enough to enjoy a spoonful of honey.”

Old-school, hard-line vegans argue that bees are animals, and therefore honey is off limits. But some vegans make the exception.

The National Honey Board has no official stance on the matter, but at the recent Honey Summit and Harvest, held on Amelia Island, Fla., the term “bee-gan” was suggested to describe a vegan who eats honey.

It turns out that blogger Priscilla Matuson, who describes herself as a “raw, grain-free, corn-free, soy-free, oil-free celiac mama,” was calling herself “bee-gan” as early as 2012. The term may be on the verge of catching on, and seems to make a lot of sense to vegans, no matter how strongly held their beliefs on animal welfare.

“As with all foods I eat, I look at the nutritional value, and as far as the raw local honey I consume, I am comfortable with my decision, especially after I have personally opened a local hive and have seen that the bees are not harmed whatsoever when done correctly,” Matuson writes.

Still, Diana Rice, Meatless Monday’s staff dietitian, says, “My understanding is that honey is not generally considered a vegan food since it comes from living creatures,” says. “But I also know that most vegans need to decide on a personal level what dietary rules work for them. Perhaps one vegan wouldn’t buy a bottle of honey at the store, but they might not inquire if the granola in a restaurant contained honey. In any case, any recipe that calls for honey can easily be made vegan using a honey substitute like agave nectar.”

2. To replace butter: Substitute a no-taste oil (such as coconut or canola), coconut cream or nut butters. Also available are multipurpose vegan shortenings.

3. To replace milk: There are many vegan milks that approximate the thickness and fat content of cow’s milk, such as almond milk, cashew milk, oat milk or coconut milk. Keep in mind that coconut milk will have a strong coconut flavor (not necessarily a bad thing, depending on the dessert).

4. To replace yogurt or sour cream: Purée soaked raw nuts like cashews or almonds and then add an acid (lemon juice or vinegar). Adding an acid to puréed silked tofu also works here.

5. To replace whipped cream: Chilled coconut cream can be whipped, but will be heavier. Adding a strong extract to the coconut cream can counteract the strong coconut flavor, if that’s not desired for the recipe. Vegan milks can be thickened with agar, a flavorless seaweed that works like gelatin. Set agar and vegan milk as you would with gelatin, then whip in a food processor.