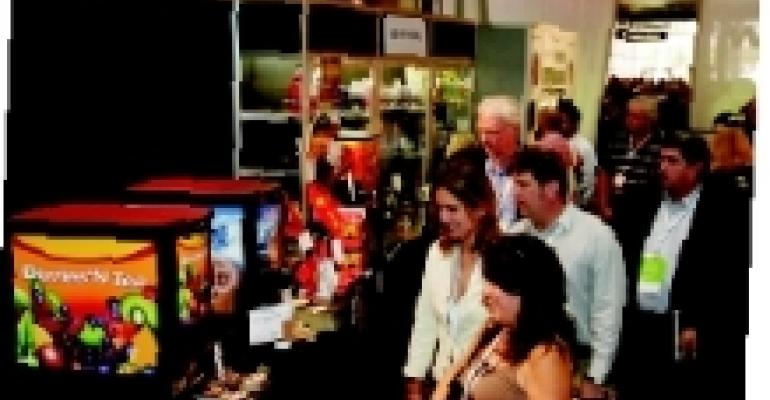 While the National Association of Convenience Stores (NACS) annual exhibition—held this year in Las Vegas—is intended for the commercial c-store industry, many of the products on display also have ready application in onsite retail environments. This is especially true of the many beverages on display.

Here is a rundown of some of the more notable new products featured at the show:
Rip It Chic is an energy drink from National Beverage Corp. (makers of Shasta and Faygo products) that extends the existing Rip It lineup with a product that appeals to female customers. Low in calories and available in two suggestively titled fruit-flavored versions—Sin-a-Man and Berry In-o-Scent—it comes in a sleek, colorful package.

Though it was introduced back in April, this was the NACS Show debut for Coca-Cola Co.'s Coca-Cola Blak, which combines the company's signature carbonated beverage with natural flavors and coffee essence. Considered a mid-calorie drink (45 calories per 8-oz. Serving), it comes in a resealable version of Coke's familiar glass contoured 8-oz. bottle.

S&D Coffee introduced its Buffalo & Spring Coffees of Distinction line, a series of proprietary blends, exotic varietals and Fair Trade Certified coffees that are positioned to give the company a premium line to augment its traditional products.

Introduced in August, the new Caballo Negro Zero premium energy drink from Distribuidores De La Energia, Inc., contains no carbs and no calories. The product, which comes in 16-oz. bottles, is designed to appeal to Hispanic customers.

The marketing hook for Encore, an energy drink entrant from TNT Marketing, is that it is "The New Sound of Energy," in an attempt to connect the product with music, a prime interest of its core "mp3 generation" customer. The product contains caffeine, taurine and various B vitamins.

Another entry from National Beverage was FREEK Energy, "the most evil energy known to man." The edgy marketing positions the beverage as virtually "insane," a stance reinforced by the flavor names: Maniac, SF Maniac, Rage and Psycho.

Another Kronik formulation, introduced earlier this year, is Kronik Grind, which employs the slang term used by target audience Generation Y consumers to refer to the action that occurs when a skateboard axle scrapes another surface. The edgy marketing tag line: "Caution: Mom Ain't Gonna Like This."

Wet Mango Exotic Energy Drink from New Image Global-Royal Blunts is now available in regular and light (i.e., no sugar) formulations. The true mango flavor is designed to evoke the exotic ambiance of the Pacific islands.