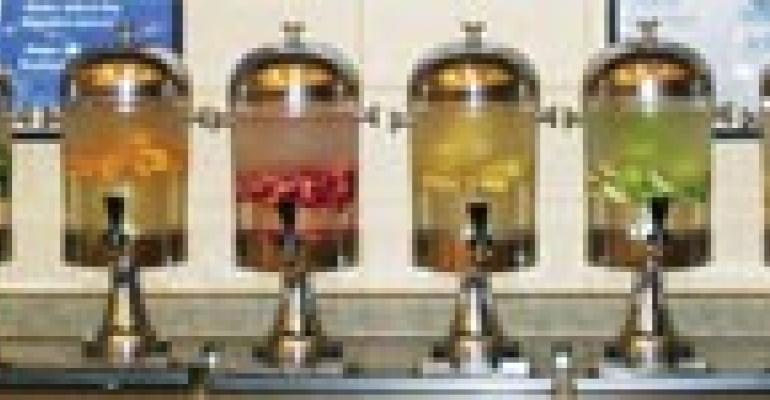 Why the sudden interest?

It had to do with an idea Miller had brought back from his time off — adding different cut fruits and even cucumbers and mint to the water to give it a pleasant, refreshing taste without adding many calories or any artificial ingredients.

Adding fruit or other natural products to water is catching on in other venues as well. At the CIA's Greystone campus, fruit-infused “spa water” is available in the staff dining room. Google has a similar beverage in its award-winning company cafes and Sodexo itself has fruit-filled water dispensers in its B&I operation at Amgen as well as in some Midwestern universities that have copied SCSU's success.

The fruit-infused water idea is similar to agua fresca (“fresh water”), a popular beverage option South of the Border that has begun to make inroads into the United States (see the May 2006 FM). The difference is that agua fresca is made with strained pureed fruit or other natural products (even uncooked white rice) mixed in equal portions with fresh water, and is often sweetened with added sugar.

Agua fresca was the inspiration at the CIA, says Teaching Kitchen Manager Marcos Hernandez. “Many of our staff are Latin and are familiar with agua fresca, so it was a natural solution,” he says

The CIA dining staff uses leftover fruits to produce the refreshing drink. The most popular mixes include mint with lemon verbena and various citrus combinations. Hernandez says there is usually no additional sweetener unless the fruit is out of season and bland. “In that case we may add some flavored syrups since we have plenty of partially used bottles around.”

At Google, the “infused water” is “a healthy green alternative to soda and bottled water,” says Facility Manager Laura Gimpel.

Google's water is presented in four or five pitchers with different flavors, depending on the season. They include berries and various citrus fruits as well as herbs like rosemary, peppermint and spearmint. Favorites include an apple water spiced with cinnamon sticks and, most unusually, a tomato/basil combination.

SCSU uses only the fresh produce with no flavor additives or sweeteners. The Hydration Station in its Garvey Commons dining hall has been an unqualified hit. Access to the water is given to all meal plan holders. The station dispenses some 150 gallons a day.

There are generally six to 10 three-gallon tanks filled with different flavors available at any given time, usually offering half a dozen flavor choices daily. Lime/mint and grapefruit/orange have been the most popular so far, Miller says. There is also cucumber, a surprising hit — “it has a very clean, refreshing taste,” Miller comments — as well as strawberry, pear and lemon.

Some fruits work better than others, he adds. Some, like watermelon, tend to disintegrate while others, like apples, will bloat, spoiling the visuals.

“The appearance is a key factor,” Miller notes. “The eye appeal makes it a easy choice in a way it wouldn't if the tanks weren't transparent.” An earlier experiment offering cut fruits separate from the water was not nearly so successful because it wasn't as compelling, nor the flavor so strong because the fruit didn't sit in the water as long.

Citrus fruits are natural choices for flavoring water, and they are available year-round. Try different varieties at different times of the year to take advantage of seasonality. Here's a handy guide, ranging from tart to sweet, courtesy of Sunkist:

For more on how to incorporate citrus fruits not just into beverages but all sorts of ethnic and traditional dishes, go to foodservice.sunkist.com.