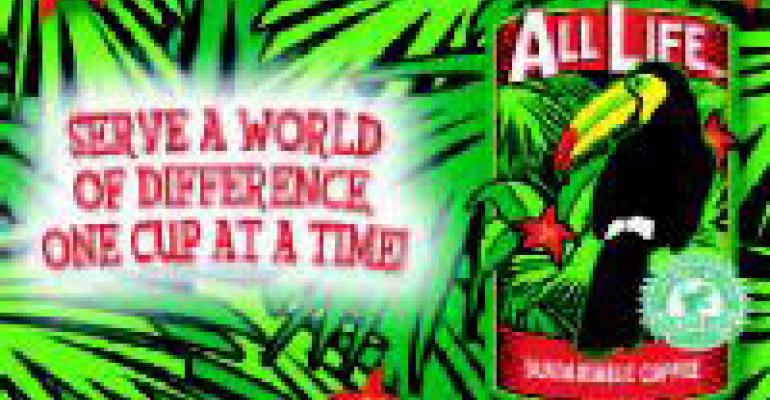 Fair Trade coffee has been a favorite cause of campus activists for several years. As a result, more than 300 colleges and universities today serve the product at least as an option in their foodservice operations, according to TransFairUSA, the entity that controls what coffee can officially be labeled ìFair Trade” in the United States.

Many of those schools offer Fair Trade as an alternative alongside traditional brews, and often charge a premium price to reflect its greater cost. A few, such as Smith College in Northampton, MA, have committed to serving Fair Trade exclusively, at least in their dining halls.

ìThe students pressed for it in a very positive way,” she says, adding that Smith's commitment to the program has included increased funding to help defray the higher purchase cost. Currently, Smith goes through some 4,000 pounds of Free Trade coffee annually, Zieja says.

But as the Fair Trade label has become fairly common on campuses (as well as in retail groceries and commercial coffee shops), it is also coming under increasing competitive pressure from alternative products also purporting to be ìfairly traded,” as well as from an expanding definition what it means to be a ìsocially conscious” product. That category has also come to include such concepts as ìsustainable,” ìshade-grown” and ìorganic” products.

The University of California at Santa Cruz is a good example of how the ìfair trade” market is mutating.

Last fall, the school's dining services department acceded to student requests to serve Fair Trade branded coffee in its campus outlets, including its dining halls and coffee carts. By all accounts the conversion was successful and eagerly accepted by the student body, according to Alma Sifuentes, director of residential and dining services.

But this year, the program is being altered somewhat. Rather than purchasing Fair Trade branded coffee, the school will buy its regular coffee from CAN (Community Agroecology Network), a non-profit organization that funds internships allowing students to work with Third World coffee growers.

CAN purchases directly from the growers, explains UC-SC Associate Dining Director Scott Berlin, meaning that they are able to pay much more while remaining competitive at the user end. Berlin says CAN pays farmers $3.75 a pound as opposed to Fair Trade's $1.26 a pound minimum (the actual world market price for coffee beans, meanwhile, is currently under a dollar a pound, a prime rationale for the Fair Trade movement which argues that coffee growers and workers cannot make a living at that price).

In addition, CAN puts greater emphasis on the ecological and sustainability aspects of its program, says Co-Director Robbie Jaffe. ìOur organization is networking coffee farmers in Latin America with consumers in the U.S. and linking farmers'-economic sustainability with environmental farming practices,” she notes.

Small groups like CAN are not the only ones jumping on the ì Sustainability” bandwagon. Major coffee suppliers like Kraft Foods ( Jacobs, Maxwell House, Gevalia, etc.) are also introducing specialty labels emphasizing ìsustainability.”

Kraft recently unveiled ì Rainforest Alliance Certified” All Life 100% Columbian Sustainable Coffee for the college and B&I markets. The Rainforest Alliance certifies the coffee as ìmeeting rigorous sustainability standards that help preserve Colombia's ecosystems and biodiversity, protect workers and families and support the communities where it is produced,” according to the organization.

ìCollege students are among the most environmentally and socially conscious consumers in our country,” says Rainforest Alliance executive director Tensie Whelan. ìNow, they can make a sustainable choice for a great cup of coffee that also directly helps coffee farmers, wildlife and communities in Colombia.”