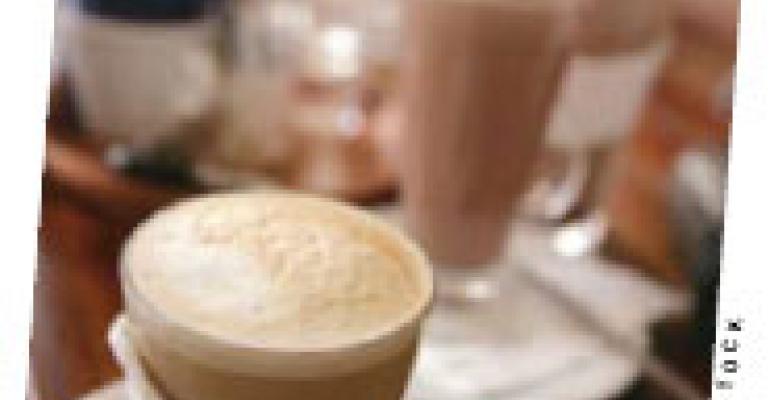 Coffee — hot, cold, gourmet or black — is prepared from the roasted seeds of the coffee plant, and is available in hundreds of different varieties.

The two most commercially available are coffea robusta and coffea arabica.

The sturdy, disease-resistant coffea robusta, which thrives at lower altitudes, produces beans with a harsher, more single-dimensional flavor than the more sensitive coffea arabica, which grows at high altitudes (3,000 to 6,500 feet) and produces beans with more elegant, complex flavors.

Coffee can be composed of a single type of coffee bean or a blend of several types. Blended coffee often produces a richer, more complex flavor than single-bean coffees. The length of time coffee beans are roasted will affect the color and flavor of the brew as well as the caffeine content. Among the most popular roasts are American, French, Italian, European and Viennese.

American roast (also known as regular roast) beans are medium-roasted. The result is a moderate brew that is not too light or heavy in flavor. The heavy-roasted beans are French roast and dark French roast, which are deep chocolate browns and produce a stronger coffee. The glossy, brown-black, strongly flavored Italian roast is used for espresso. European roast contains two-thirds heavy-roast beans blended with one-third regular-roast; Viennese roast reverses those proportions.

Coffee can be brewed in several different ways. Brewing methods fall into four main groups that vary depending upon how the water is introduced to the coffee grounds.

Water temperature is crucial to the proper extraction of flavor from the ground coffee. The recommended brewing temperature is 204°F; any cooler and some of the solubles that make up the flavor will not be extracted. If the water is too hot, some undesirable elements will be extracted, adversely affecting the taste, especially in terms of bitterness.

If the method allows the water to pass only once through the grounds, the resulting brew will contain mainly the more soluble components (including caffeine).

If the water is repeatedly cycled through the beans (as with the common percolator), the brew will contain more of the relatively less soluble compounds found in the bean and tends to be more bitter.

Boiling: The simplest method is to put the ground coffee in a cup, pour hot water in it and let it stand to let it cool and let the grounds sink to the bottom. This method allows for the most control of water temperature. (However, one should not drink to the bottom of the cup!)

Pressure: Espresso is made with hot water at between 195°F and 204°F that's forced, under pressure, through a tightly packed matrix of finely ground coffee. It can be served alone or as the basis for various coffee drinks. It is one of the strongest-tasting forms of coffee regularly consumed, with a distinctive flavor.

Gravity: Drip brew (also known as filter or American coffee) is made by letting hot water drip onto coffee grounds held in a coffee filter. Strength varies according to the ratio of water to coffee and the fineness of the grind, but is typically weaker than espresso.

Steeping: A cafetière (or French press) is a tall, narrow glass cylinder with a plunger that includes a filter. The coffee and hot water are combined in the cylinder (normally for four minutes) before the plunger, in the form of a metal foil, is depressed, leaving the coffee at the top ready to be poured. This style of “total immersion brewing” is considered by many coffee experts to be the ideal way to prepare fine coffee.

A demitasse is somewhat similar to an espresso without the crema (foamy head). It is a small cup of strong black coffee often served after a meal.

A latte is one-third espresso and nearly two-thirds steamed milk, traditionally topped with froth created from steaming the milk.

Café au lait is similar to latte except that drip-brewed coffee is used instead of espresso, with an equal amount of milk.

Americano style coffee is made with espresso (normally several shots) and hot water to give a strength similar to drip-brewed coffee.

Mocha is a latte with chocolate added.

Flavored coffee: Chocolate is a common additive that is either sprinkled on top or mixed with the coffee to imitate the taste of Mocha. Other flavorings include spices such as cinnamon, nutmeg, cardamom, or Italian syrups.

A caffè macchiato is an espresso with a small amount of steamed milk added to the top. As with a latte, sometimes sugar or flavored syrup will be added to a macchiato.

Latte macchiato is the inverse of a café macchiato, being a tall glass of steamed milk spotted with a small amount of espresso. As with the latte and the caffè macchiato, sugar or syrup can be added.

Iced coffee normally contains milk and sugar. Since sugar does not dissolve well in cold coffee, it is usually added while the coffee is hot. Iced coffee can also be an iced form of any coffee drink.

Frappé is a cold coffee drink made from instant coffee.

Frappuccino is a variation of iced coffee created by Starbucks. Other coffeehouses serve similar concoctions, but under different names. The drink in question is an iced latte, mocha, or macchiato that is mixed with crushed ice and flavorings and blended.

So-called “ethical coffee” is coffee that is produced or traded under specific conditions and standards that are claimed to be more environmentally friendly or economically equitable to the producers.

Bird-friendly-or shade-grown-coffee is produced in regions where natural shade (canopy trees) is used to shelter coffee plants during parts of the growing season. These shade cycles are said to be better for the coffee.

Organic coffee is produced under strict certification guidelines, and is grown without the use of artificial pesticides or fertilizers.

Fair trade coffee is coffee that is purchased directly, bypassing the “middleman” therefore giving the producer and buyer higher profits.