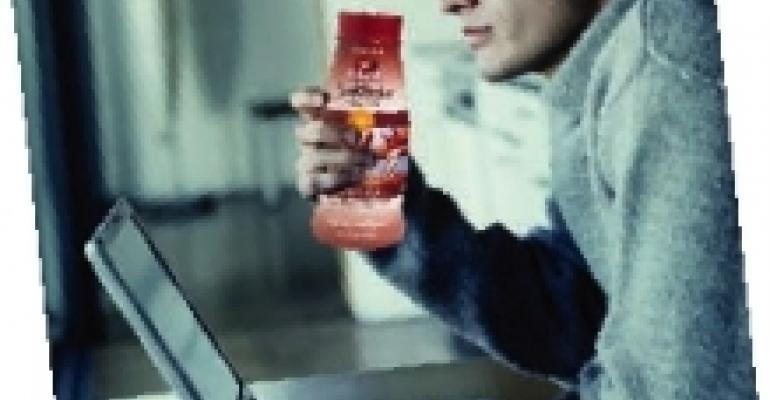 Joe on the Go

It's not nearly as big as its tea counterpart, but RTD (ready-to-drink) coffee has been posting some pretty impressive sales growth numbers over the past few years.

In 2000, the category grew 20.2 percent, and followed that with a 23.1 percent jump in 2001. Final 2002 numbers weren't available at FM press time, but they were undoubtedly juiced by the entries of marketing behemoths Coca-Cola and Procter & Gamble to the field during the past year.

A few months after Coke's announcement, P&G launched Folgers Jakada in a joint venture with the Morningstar Foods division of Dean Foods. Later in the year, Star-bucks and PepsiCo countered with DoubleShots, a bottled espresso drink designed to appeal to on-therun caffeine fiends and energy drink aficionados.

Meanwhile, a bevy of smaller competitors also continue to jockey for position in the category, but the presence of so many big names signals the excitement the category holds for marketers looking for an exploitable niche with significant growth potential in the otherwise stagnant beverage category.

What has them excited is the appeal RTD coffees have to young consumers. According to a study by the National Coffee Association, 18-to-24-year-olds are more than twice as likely to consume iced coffee beverages than any other age demographic. No surprise there, since the coffees combine the premium appeal of the lattes and espresso shots dispensed by upscale coffee shops with the edginess of bottled sports and "energy" drinks. These have natural appeal in onsite segments catering either to young adults or young upscale professionals.

"Traditional made-to-order coffee outlets have habituated customers to like that kind of premium beverage, and the bottled ready-togo products have appeal because they add quickness and convenience," says Michele Newhard, special projects manager in the food service department at Penn State in University Park, PA.

So far, RTD coffees have made the most impact on the two coasts. At San Jose State University, RTD coffees—particularly Star-bucks products—have been big sellers, says Jeff Pauley, retail operations manager. Currently, Frappuccino makes up about 12 percent of the department's bottled beverage sales, while DoubleShots—introduced in August—adds another 1.5 percent.

"After a slow start, DoubleShots has become increasingly popular," Pauley says. "As a coffee drink in energy drink packaging, it proved especially popular during final exams." He addds that he expects DoubleShots sales to increase during the spring semester also.

Youth appeal has always been a key to new product buzz, and RTD beverages have the additional advantage of not requiring the expensive labor, equipment and floor space chewed up by traditional ready-to-drink coffee retailers.

The category accommodates a host of small, local, niche brands that appeal to young consumers' individualized tastes while also providing an obvious brand extension for established coffee names like Starbucks and Folgers.

It also offers the kind of handling versatility formerly reserved for traditional bottled beverages like sodas and juices. That versatility will be further advanced for Folgers because a recent FDA ruling allows Dean Foods to proceed with manufacturing Jakada (which is made with low-fat milk) through a special aseptic process that eliminates the need for refrigeration while still allowing a 180-day shelf life.