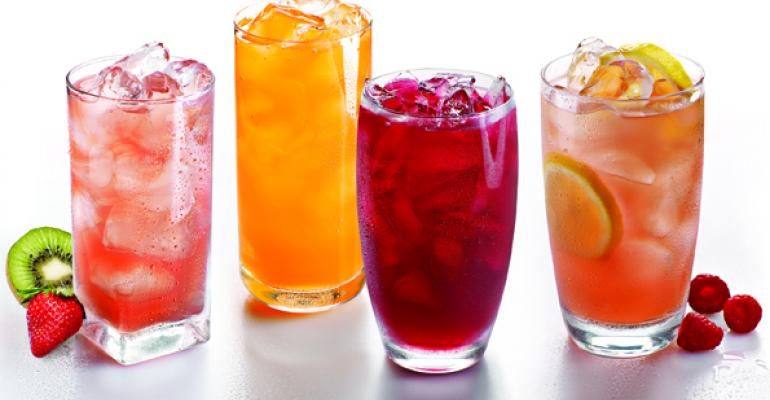 Not ‘Blending In’ to the Crowd: Trends in Juice Blends

Almost one quarter of consumers say they’re purchasing more fresh juice now than they were a year ago, according to a new report by Technomic. Seven out of ten consumers answered “fruit juice” when responding to the question “Which of the following beverages do you drink at least occasionally?” Plain milk and regular hot coffee came in second and third.

The report declares juice—once seen as just for breakfast or as a specialty—to be “one of the biggest menu trends” in the industry. The new interest on the part of consumers blends in with the wellness-conscious message in the air today of “5 a Day” consumption of vitamin-packed fruits and veggies.

This is a happy convergence for onsite foodservice operations in every segment, be it healthcare, college, K-12 or B&I whose organizations make wellness a part of their mission statements.

“Juices can be a ‘secret weapon’ in the move to improve nutritional value (and parent appeal) of kids’ menus,” the report suggests.

“More students are looking for healthier choices and are drinking less soda products,” according to Gary Brautigam, director of dining services at Gettysburg College, where students can find mojito limeade and pomegranate lemonade (more on those later). 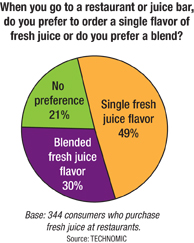 Half of the consumers surveyed by Technomic said they most often order “single fresh juice flavor.” One third of them said they go for “blended juice flavor,” and the other 21 percent said they had no preference.

“A lot of customers still like the standards—we offer grape, apple and orange juices,” says Patricia Ainsworth, foodservice director, Millsap College, Jackson, MS. In fact, orange juice is the reigning favorite of fresh juices, the survey noted, with 65 percent of consumers citing OJ as their top pick when ordering away from home, followed by 38 percent who seek out strawberry.

At the same time, Ainsworth has noticed students on the all-you-care-to-eat meal plan “putting in a little bit of this and a little bit of that” to make their own customized mix from the fresh juice dispenser bank. “Peach seems to go especially well with all the juices,” she says.

Today, blends don’t just “blend in” to the crowd. Fresh juice is especially appealing to today’s food channel-surfing customers when it’s blended with other juices, and in wilder combos than apple- cranberry.

Think mango-pineapple-coconut, watermelon-lime-guava, passion-orange, apple-ginger or pomegranate lemonade. Off-beat and on-trend veggies like kale, cilantro and celery can add even more dimension of flavor (and nutrients).

Customers follow their mood to choose juice throughout the day, sometimes feeling like a classic unadorned orange juice with a breakfast sandwich, and at other times up for lemonades with a major twist.

“We recently added a mojito lemonade and pomegranate lemonade,” Brautigam says. “We find that students require the basics: orange and apple juice, but look for interesting blends like citrus peach when they are not in the ‘breakfast’ mood.”

Specialty juice bars have long offered the option of “boosts” to juice concoctions, promising everything from energy to immunity to vitamins to probiotics and protein. But does the average consumer really go for that?

According to the survey, 49 percent of consumers said they never order boosts because they “don’t think they do anything (almost half cited this reason),” “are not available" (38 percent), are “too expensive" (15 percent), “add calories" (14 percent), or “change the taste" (13 percent). Of those who do order boosts, almost six out of 10 believe they enhance the juice’s nutritional profile.

Overall, “you will generate more customer interest with a variety of out-of-the-ordinary blends. But, failing that, even the standard juices could meet the needs of health-conscious consumers as well as those who want a break from soft drinks,” the report concludes.